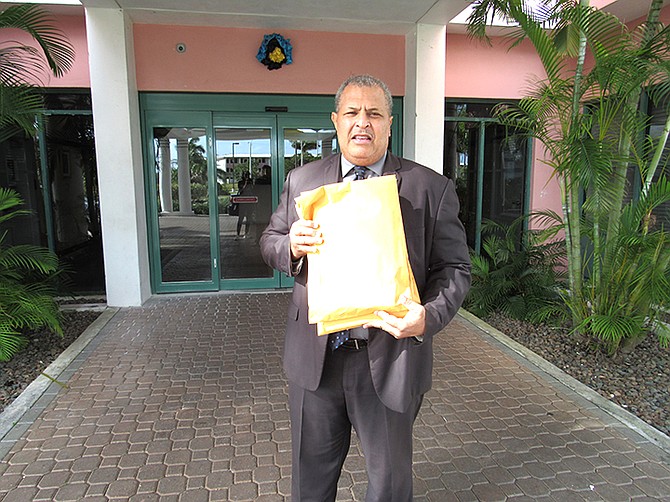 Pastor Eddie Victor delivering copies of the letters of support signed by citizens from East Grand Bahama, to the office of the constituency office of Deputy Prime Minister and Member of Parliment K. Peter Turnquest.

SOME 300 letters of support signed by residents of West and East Grand Bahama were delivered Friday by the Coalition of Concerned Citizens to the Office of the Prime Minister in Freeport calling for government intervention in lowering the cost of the energy in those outlying areas.

In the letter, the residents are asking government not to renew the West End and East End agreements between the GB Power Company and the Bahamas Government that expired in the latter part of 2018.

They want government to approve the application of the new Power Plant that proposes to build a Firm Solar Power Plant in East and West Grand Bahama that will lower the cost of power by 30 to 40 percent.

Pastor Victor noted that so far they have collected 301 letters, and many more are expected to come in. Copies of the letters also will be sent to Prime Minister Dr Hubert Minnis, he said.

“This is the first batch of letters; there are hundreds of more letters coming in and as we collect those we forward them to MP in West GB, the DPM Peter Turnquest, MP for East GB,” Mr Victor said.

The CCC has been conducting town meetings in West and East Grand Bahama throughout 2018, not only to hear the concerns of residents over the high cost of electricity in their communities, but to share with them information concerning a new solar power company that could reduce the cost of power.

“We asked the public to participate in the process of conveying to the government the need to bring down the cost of electricity. We ask our citizens to sign letters of support,” Mr Victor said.

Mr Victor expects that a lot more letters will be coming in over the holidays and in the month of January 2019.

He noted that pastors in the various communities are assisting in getting the letters signed by residents and collected for the CCC.

The CCC organization has been advocating and campaigning for lower power rates for the past five years. They have held a public protest, demonstration, marches, boycotts, and rallies against the GB Power Company.

“We are petitioning the government to intervene in the energy sector in Grand Bahama. We ask them to bring down the cost of electricity on this island because we have been paying excessively high electricity rates for years,” he stressed.

“It has affected, and it also resulted in hundreds of people living without power on the island. It also caused hardship on businesses to the point where many have closed,” he added.

Pastor Victor said that the CCC supports the solar power project by Northern Bahamas Utilities, a 100 percent Bahamian owned power company, that has applied to the government to build $30 million solar power plants in West and East Grand Bahama. The application is still awaiting approval by the Minnis government.

He noted that NBU proposed to bring down the cost of power by 33 to 40 percent in West and East Grand Bahama.

“This company is 100 percent Bahamian owned. The principals are qualified engineers who are all former employees of the GB Power Company who had served in many levels of the company. Moreover, the collective experience of the principals amount to 106 years of experience in power generation and transmission distribution,” said Pastor Victor.

“It is also important to note that the leadership team of NBU has more experience in power generation and power plants than EMERA which has been in the power plant and generation industry for 35 years,” he said.

Pastor Victor said that NBU has the experience, finances, and technical experience to develop and operate power plants.

“We have the Bahamians qualified with experience in the industry,” he stated.

“I am hoping the letters would mean for them (the representatives and the PM) confirmation of what people are thinking out in the public because you can hear a lot of what people say, but when you actually see a letter signed by your constituents, I think it would bring across the message more clearly that they want a change,” Pastor Victor said.

Kirkland Russell, a resident of West Grand Bahama, and vice president of the Commonwealth Trade Union Congress for the Northern Bahamas, said they support the solar power plant project proposed by NBU.

The trade union’s main objective is to enhance the lives of workers throughout the Bahamas, and to create opportunities for the workers in GB to receive improved benefits and conditions.

“We see this opportunity for the change in the way power is distributed throughout East and West GB as a golden opportunity for those residents. It will allow them to keep more money in their pockets, create numerous opportunities for business expansions that will attract more business to move into West and East GB,” he said.

Mr Russell said that Butlers Food Store and the Window Company on Queens Highway closed because of the high cost of electricity. “They did not close for lack of business; they closed because the electricity was too high,” he stated.

He said that reduction of power cost by some 30 to 40 percent is very significant for residents.

“The union fully supports this programme, and we are encouraging and insisting that the Government of the Bahamas get behind this project. This is a golden opportunity for the government to do something for the people of East and West Grand Bahama that will substantially affect them financially and socially. This is a win, win situation for all.

“Where I live in Hunters they are enthused and eagerly awaiting this company to get ratified and given an opportunity to compete. We are very concerned that EMERA is a 100 percent foreign-owned company, and this new company is 100 Bahamian owned.

“This is not a political game. This is serious business as it relates to residents of East and West GB and also Freeport because the GBPC will be able to purchase surplus energy (from NBU) and resell at a cheaper rate for residents of Freeport,’ he said.

The gluttonous only interest is how they will make money from lowering energy cost and at the same time how to keep the people under their control. We must learn how to present plans detailing how the gluttonous can make more money and keep our obedience to them without costing them a cent. That’s what the political parties/lobbyist do, we must learn how to do this. Until Bahamian civil groups learn how to play politics and do business they’ll always be outsmarted, sidelined, ignored and deceived, or setup to use the public achieving nothing other than to be boughtout. There can be no other outcome as long as the people continue to sign up and to be lead by those with Nothing other than outdated begging methods. So good luck with this!

Wait til they start a surcharge to fund building the new solar plant....

Christmaa haa been canceled this year due to high VAT, high rent, and high light bill. I simply refuse to celebrate it.

Just this Saturday i was walking along Robinson Road and this old lady in a kindly tone wished me a Merry Christmas. I struck her right in the mouth !!!

I understand the police and her two adult grandsons are all looking for me :-)

Madd as a Hatter!

As for this article in particular, if only 300 people in Grand Bahama care enough about high power bills to take a moment to support this coalition, then GB deserves high power bills.

Government should add an extra $2/kwh tax to GB power bills. Why? Because the people just don't care.