Church: We've Made Our Case Over Non-Profits Bill 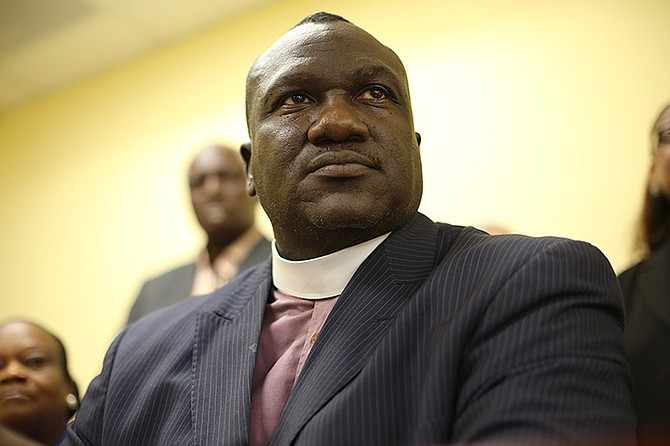 CHURCH leaders will “wait to see” if the Government changes the Non-Profit Organisations (NPO) Bill to address their concerns, adding: “We’ve made our case.”

Bishop Delton Fernander, head of the Christian Council, told Tribune Business that church leaders had met with the Attorney General, Carl Bethel QC, over their concerns but did not wish to disclose details given that he recently accused Civil Society Bahamas (CSB) of divulging confidential information and trying to force the Government’s hand.

“We met with the Attorney General. We had our lawyers put our case forward, citing jurisdictions,” said Bishop Fernander. “We will wait and see what the new bill looks like and make our position known from there.

“We are at the point now where we have made our case from a legal perspective. We’re just waiting to see what the new bill looks like, if it takes into consideration what we proposed or not. Then, if it does or doesn’t, we will make our position very clear.”

Mr Bethel previously told Tribune Business that the Christian Council and Bahamian churches were seeking “a complete exemption” from the Non-Profit Organisations Bill and its provisions, despite his agreement to make the legislation less onerous and “more user friendly”.

He said they cited one other jurisdiction that had developed a law exempting the church from such regulation, arguing that it had established a precedent to justify their demands.

Mr Bethel, though, described the church’s viewpoint as an “unsustainable position”, adding that the information he possessed contradicted their assertions. While agreeing that one country had drafted such a law, he added that it never been brought to Parliament or passed on to the statute book.

Bishop Walter S Hanchell, head of Great Commission Ministries and Citizens for Justice, recently expressed fears that the Bill “will allow the Government to control churches”.

Just admit it. You all are afraid that the government will see how many churches mismanage and abuse funds. Thats not the purpose of this bill. This bill proposes to ensure that the funds you all mismanage are not as a result of ill gotten means!

I don't think the government cares what you do with your donations, it's concern is where you are getting it from! To all the pastors out there who love to abuse the gullible Bahamian flock, no need to worry, you will still be able to do so!

Who does this Bishop think he and the church is? Churches are public institutions. They take public money. Pastors and others in churches do strange things sometimes. Not al are men and women of God. The Government ought to tell the Christian Counsel to shut the ..... up and MAKE ALL churches accountable. ABSOLUTELY NO EXEMPTIONS. It's sickening how these preachers think they are above accountability. You take public money you account for it. Plain and simple.

What's more apaling than the incidious use of church funds for the benefit of "church leaders"; is the systemic problem of child sexual abuse. While the Catholic church is not alone in this, it has definitely been exposed as the greatest offender. I feel that it could prove to be useful to collect data regarding church finances, as this could serve criminal investigations in that confiscation , as in confiscation of the proceeds of crime, could be better achieved by knowing church assets.

The prosecution and in some cases the elimination of churches and the leaders is loing overdue; as if it's not bad enough that the behaviour of some church leaders is in effect desecrating the religion they purport to serve, but in addition they sexually abuse minors and rob their members.
If religion is to survive, we need to weed out and eliminate the bad churches and the bad leaders, before, the shame they cause disgraces our religion beyond recovery..

We always boost about Tourism being the number one Industry followed by Banking ...Then we Bad mouth the Numbers Industry because of the socials ill they cost, But why not hold the church accountable and see who is really fleecing the flock. The NPO Bill when passed should hold them accountable.

One only has to look at the heading photograph. A "fat cat" ( literally) so called pastor Fernander wailing about his income loss. Where will his next mansion or mercedes come from? Oh Lord - we Revs suffering worse than Jesus!!! Do they worry about drugs, crime, the poor, abused and misused? --No? Do they worry about their crooked bottom line? You better believe it !!! Bring in the Guillotine !!!! As Henry 11 said "Will no one rid me of this meddlesome priest?"

There are very few "churches" in this country .......... most are registered as businesses. Formal churches are legal institutions that are aligned to recognized denominations, that have been legally incorporated by Parliament and subject to auditing and accountability. These formal church pastors are fiscally regulated and their members know what happens with the organization's finances.

However, most Bahamian modern "churches" like BFM, Ellis, and their spawn are so-called independent and do not answer to any central authority - they run religious businesses.

Yes, or no, the established churches comrades in we colony of islands, will never welcome financial transparency. Yes, or no?