Insight: Stand Up, Speak Up Because Rome Is Burning And Time Is Running Out 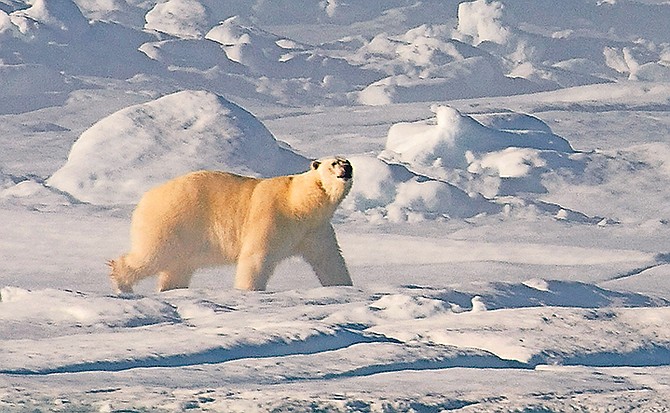 From the poles, such as in this picture where a polar bear walks along the ice flow in Baffin Bay above the Arctic circle, to the shores of The Bahamas, climate change is predicted to have a huge effect on the world we live in.

A statement may have been made at one or more of the Caribbean countries that attended the Conference of the Parties (COP) on the disastrous effects of climate change in Katowice, Poland in early December, but if any statement was made it is nigh impossible to find it despite the considerable search engines on the internet.

Yet, the disastrous results of the Katowice conference should be a renewed call to arms for all Caribbean island-states whose very existence is now closer to extinction than it has ever been.

In the face of the continued recalcitrance of the powerful states even to admit the existence of the harmful effects of climate change - and their downright refusal to take the necessary action to stop it - if there is a comatose condition among Caribbean representatives, it is understandable but not forgivable.

What happened at Katowice in Poland, is nothing short of a death sentence for small island states.

Delegates to the conference went into the room with the full knowledge that the Intergovernmental Panel on Climate Change had called, categorically, in its October 2018 report, for radical structural transformation, particularly as the world is patently failing to hold global warming to no more than 1.5 degrees Celsius above pre-industrial levels. The report showed that unless the global community brings emissions under control within 12 years, there will be no prospect whatsoever of achieving that goal.

Simply put, by the time a child born this year is 12-years-old, Caribbean islands and low-lying coastal areas will be confronting ravages to productive areas and habitats that could induce the flight of people from their homelands.

Ralph Regenvanu, Foreign Minister of Vanuatu, was belligerent. Noting that rebuilding and climate resilience costs are soaring from fiercer storms and rising seas, he is seeking to form a coalition of vulnerable nations prepared to sue fossil fuel companies to pay for damage linked to climate change.

He is making a telling point. It is not dissimilar to one made recently by Professor Avinash Persaud, an economist and consultant to the Barbados government. Increasingly, small island states - which are the very least of the contributors to climate change and are its greatest victims - are being required to pay the cost of the loss and damage that are inflicted on them. Persaud argues that “Islands and flood-prone places are being asked to pay premiums to be insured against future losses and damage of a climate change caused by others. This is asking the victim to pay by instalment. If our main response to human-made climate change is to try and make it easier for the victims to pay for it, the march of climate change will press on unimpeded.”

But at Katowice, rich countries prevented any movement on how to estimate financial contributions to support adaptation by vulnerable countries. They simply don’t want to pay.

There is good reason for these “wishes” by the poor and vulnerable nations. Without their fulfilment, existing foreign aid flows could easily be reclassified as a contribution to climate finance, leaving the actual amount of support unchanged. This kind of behaviour was obvious at the UN sponsored pledging conference for Caribbean countries devastated by 2017 hurricanes.

The so-called “Katowice agreement” avoids the grave concerns about climate finance by not addressing them officially in the final agreement. Imagine that the one positive result of the meeting on the financing issue is that rich country negotiators agreed to “revisit” the issue of scaling up financial contributions in 2025. In other words, they agreed to “talk” about it yet again – fiddling while Rome burns. But, of course, it is not their “Rome”, and, in the minds of many of their negotiators, relocating a few million dislocated and displaced people from small islands is a cheaper option than paying compensation for the destruction of homelands and civilizations caused by climate change.

The one hope in all of this is that a National Climate Assessment in the United States, published before the climate conference in Poland, concludes the impacts of global climate change are already affecting the US as clearly evidenced by the growing number of intense wildfire seasons, droughts, heatwaves and floods the country has been experiencing. The report notes these conditions will worsen unless urgent action is taken to curb greenhouse gas emissions. Significantly, it states annual average temperatures across the U.S. have risen by 1.8°F since the beginning of the 20th century.

The costs for the US are also high and rising. Here are some examples: rebuilding Puerto Rico’s power grid destroyed by hurricanes Irma and Maria, is estimated to cost $17 billion; flooding in the Mississippi and Missouri river basins in 2011 caused an estimated $5.7 billion in damage; and the federal cost of fighting fires across the US ranged from $809 million to $2.1 billion per year between 2000 and 2016. The report says that by 2100, these costs could rise to hundreds of billions of dollars a year and could affect the US economy “worse than the Great Recession did”.

Given the climate report on the US, there should be strong allies in the states and cities where the harmful effects of climate change have been felt and are not letting-up.

Caribbean countries should stand-up, speak out and take a lead in mobilizing small states everywhere to join strong alliances into the decision-making councils and board rooms, globally in an unrelenting campaign for their collective survival.

The only solution to climate change is to stop it.