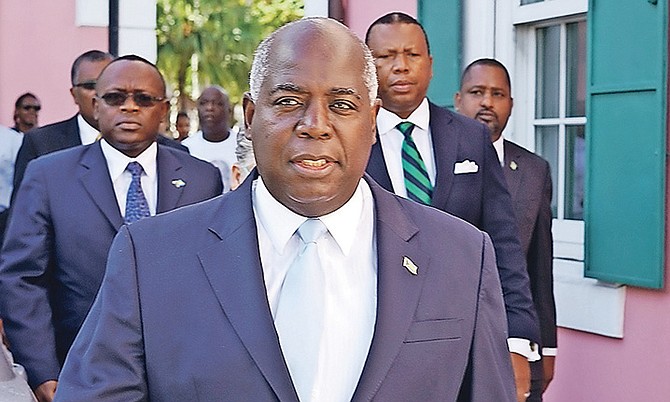 OPPOSITION Leader Philip “Brave” Davis does not expect the Minnis administration to push a bill that would prohibit web shops and their bosses from giving money to political parties.

Such a provision is in a draft bill to regulate campaign finances of political parties which Attorney General Carl Bethel recently gave the Progressive Liberal Party. The draft bill, the Political Parties Registration and Election Financing Bill 2012, would prohibit people or companies licenced under the Gaming Act from contributing to a political party or candidate. The bill was drafted under the last Christie administration.

Asked on Monday about the gaming provision, Mr Davis said he couldn’t see a rationale for it.

“I don’t know why they would say that because I think the gaming shops contribute to all parties so why they would want to restrict that is not sensible to me,” he said. “So the shipping companies could, the banks could, other businesses could but what is so special about the gaming business that they shouldn’t? I would not expect that provision to be in any final bill.”

The Tribune reported last week that Mr Bethel, seeking to kickstart discourse about the longstanding issue, is expected to recommend a number of changes to the bill in the new year.  He said the bill needs a lot of work and has not publicly endorsed any of its provisions.

Mr Davis declined to reveal his guidelines for campaign finance legislation. He said his hope is that whatever is produced secures bipartisan support.

“I want to see what they are proposing because at the end of the day it has to be a document we all sit down to agree on a bipartisan basis and that’s what I hope, that whatever we settle upon it will be something that’s bipartisan as opposed to having any issue or rancour about,” he said.

Although the bill was drafted during the Christie administration, of which Mr Davis was a part, it never came before to Cabinet, the PLP leader said.

“I never saw the bill until (Mr Bethel) sent it to me,” Mr Davis said. “That bill may have been the bill drafted by the Reform Commission, as they often do when they hear desires of a party, they may have been hearing about campaign reform on the campaign trail and people talking about it and they may have decided to have something ready in the event they are called upon to do so. Ordinarily what they would do is they would not reinvent the wheel. The regulation of campaign finances is nothing new so what I would expect them to do is to look at the existing legislation in other jurisdictions, try to benchmark it against the culture or utterances they have heard in the public domain by politicians and tailor a document in that context.”

In a statement released late last week, the Democratic National Alliance noted talk of campaign finance legislation comes as the government struggles to pass legislation regulating non-profit organisations legislation that would impose disclosure requirements on them.

“The legitimate concern of the populace that political parties just like NPOs should not be exempt from scrutiny seems to have forced the government to finally propose campaign finance legislation,” DNA deputy leader Arinthia Komolafe noted.

She added: “We believe that it is extremely important that the Bahamian people are aware of the sources of funding for political organisations. The legislative and policy priorities of successive administrations upon assuming office point to an obvious need for transparency and accountability in the campaign finance process.

“An effective campaign finance legal framework will reveal special interests and groupings that may seek repayments in favours, contracts and appointments from political parties following election victories. The discourse on campaign finance regulation has been taking place in The Bahamas for decades without any meaningful progress by the Progressive Liberal Party and Free National Movement administrations to date.

“Campaign finance reform in The Bahamas is long overdue and should not be delayed any further. While it can be argued that the Government’s recent pronouncement is only an attempt to placate the Bahamas Christian Council, NPOs and the Bahamian people, we are hopeful that this is not another grandiose announcement without any intention to implement this vital framework. The Bahamian people deserve and urgently demand good governance from an administration that promised that it would be ‘the people’s time’. We implore the government to proceed with completing the drafting, tabling and passing of the legislation without any further delay and pray that this crucial legislation does not meet the same fate as the Freedom of Information Act, which has been put on the proverbial backburner. Campaign finance reform has been at the heart of the DNA’s platform for good governance and the DNA looks forward to providing valuable input into the draft legislation and working with the government to complete this process as soon as possible.”

Coward Davis's position here is not at all surprising. After all, Coward Davis loved taking his share of the proceeds of crime accumulated by his drug dealer friends in the form of legal fees. This evil pudgy fella, with his short stubby grubby yellow sticky fingers, would take money from the devil himself without asking what for or even batting an eye. LMAO

Davis knows how to push Minnis buttons ......... Davis knows that some of the FNM MPs are compromised by the numbers cartel ........... He knows that Minnis will not act on those webshop criminals ............ They are criminals masquerading as successful gentlemen & businessmen ........ social leeches, who continue to entrap gullible, desperate, poor Bahamians.

Go to every Family Island and ask the numbers bosses what worthwhile project that they have contributed to in those (depressed) communities .................. absolutely NOTHING!!!!!!!!

The people voted NO to the Gambling........6 Opposition MP....all FNM members plus one then Gubbermint MP Dr Rollins voted NO ......but dis was all overturned.....by 25 then governing PLPs.....voting against the people and then FNM Opposition........resulting in HISTORIC LOSS EVEN THE PRIME MINISTER LOSING HIS SEAT.....and now they wants to bring up Gambling money again......reminding the people how dey is where dey is now.....lowest no. seats....4 to the 35 Govt now......

But act quickly and smartly or the comrade electorate will once again return polling stations across we colony islands - left same option to pick the 2022 governing winner from but two just alikes in gleefully taking monies from numbers man's mainstream political parties. Any monies the numbers man's can spare hand over the politicians - should be taxed end up in PeoplesPublicPurse.

Reason Number One, Mr. Davis, is that "web shops" should be CLOSED, should be ILLEGAL. They are the largest factor, in combination with crooked politicians, of the destruction of our economy and our Bahamas..

Davis is such a tool! His ignorance would be acceptable if he weren't such an old man. A child would be excused for thinking its okay because they haven't yet been exposed to criminal organizations and the effects of bribery. Davis is very learned in both areas and he still sees nothing wrong with it. LMFAO!

Yes, or no, comrade leader "Brave" talkin likes since numbers man's have undergone legalized come to Jesus moment as gambling operators - they is free spread their monies earned from poor peoples a dollar here and dollar there wagers for the financial benefit both PLP and red shirts politicians. Yes, or no?

The gambling cartel already has politicians on both sides deep in their pockets thanks to Muppet Davis and the PLP!

Both Dimwitted Minnis and his constantly yapping little white haired poodle (D'Aguilar) must do as King Sebas of Lucky Charms and Prince Craig of Flowers Galore direct them to do. LMAO

Numbers money controls both parties so they are guaranteed to win, unlike their customers!