Life Under The Dump’S Smoke 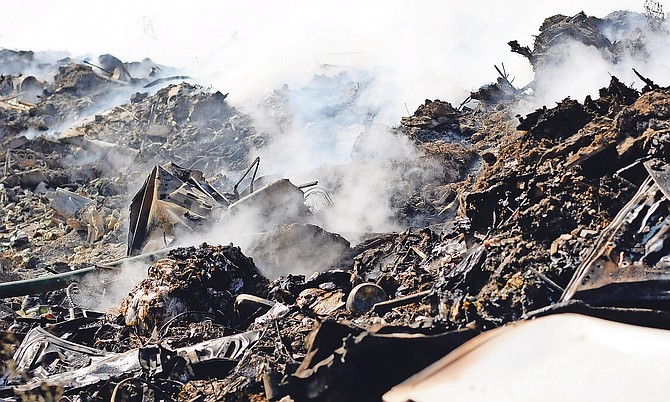 RESIDENTS who live in the communities near the New Providence Landfill find themselves, yet again, going through the “routine of recovery” as smoke continues to emanate from the dumpsite.

The Tribune canvassed the Jubilee Gardens community yesterday to grasp the mood of property owners and their families as government officials look to make inroads into the longstanding crisis. On Saturday, January 27, a fire erupted at the dump, sending plumes of black smoke in the air. More than a week later, locals said they were still grappling with the effects of noxious smoke.

While many of the residents interviewed by The Tribune agreed the recent fire is not as severe as fires in the past, nearly all of them insisted they just want an end to the recurring issue.

Marsha Wells, who has lived through more than four fires at the landfill, said the key to overcoming the adverse effects has always been in the preparation she and members of her family have taken over the years.

She said due to her family’s financial constraints, it is hard to move each time a fire occurs and, as a result, they’ve adapted their lifestyle to best address their living conditions.

“A lot of people laugh, but the things we go through regularly is all to keep things in order when a fire happens and when the smoke blankets us,” she said.

Recalling her family’s decision to move to Jubilee Gardens more than a decade ago, Ms Wells said when friends would ask where they were relocating to, she would joke and tell the “dump city”.

“We always said dump city as a joke, now we call it smoke city and everyone in here knows what that means,” she said.

Ms Wells, a hotel employee who is the primary caretaker for her 87-year-old grandmother added: “My daughter ordered this (air purifier) right here because she knows we could keep some of the smoke out, but not all.

“We have to check the windows every week. We have to make sure the seals are all good. Same thing with the door and every other spot around the house that air could get in to. Then what gets in, we hope that the (air purifier) controls.”

When asked what happens when smoke gets into her home, Ms Wells said: “Child, it constant cleaning then. Everything that can hold the smoke we have to clean and clean deep. So again, more money, added on to whatever we spend when we have to relocate to a hotel.”

Standing close to her grandmother Pleasant, who sat just outside the home’s front door alongside an elderly neighbour shelling a batch of green peas, Ms Wells said: “It’s what we have to do for her. We are worried because at this age, any little thing could become something big in no time.”

Ms Wells explained that a recent trip to the eye doctor for her grandmother revealed last month’s fire had temporarily affected her sight.

“We took her in after she was saying eyes were bothering her and the doctor told us the smoke was messing with her eyes. I couldn’t believe it.

“So it goes to show, we think about the lungs and the heart, and those parts of the body, but this smoke thing goes beyond.”

While the longstanding issues of the landfill have become political fodder, Ms Wells said residents faciing the situation are dealing with it at ground level.

She said: “It isn’t about who done more or who said more. Yes, (former Tall Pines MP Leslie) Miller did his part while he was in office. Yes, we’ve seen the new MP do all he could when the time came. But despite all that, the smoke comes no matter who in charge. The smoke comes no matter who is hired to watch the site. They say people going in starting the fires, they do that no matter who is the government. So until we look at the root of it all, people like us in Jubilee will be stuck with hoping forever.”

“It’s not about pointing the finger at the government, it isn’t now and it never was for most of us,” Mr Rolle told the The Tribune from the window of his home.

Clearing his throat more than a dozen times during the brief interview, Mr Rolle said it continues to be a “day-to-day” struggle for residents unable to move.

Mr Rolle said he wasn’t interested with political talk surrounding the issue, but rather the resolutions being pitched by those affected and those concerned about the well-being of residents near the site.

Mr Rolle said no one in his home has developed medical issues associated with the dump smoke, but he said he knows it is simply “a matter of time.”

“We hear the stories. We know what it means to be here. It may not come now, but the longer we are here and that dump is there, it’s only a matter of time before something happens.”

Last Friday, 111 residents of Jubilee Gardens filed a class action lawsuit against the government and former site manager Renew Bahamas for causing them to be “sickened to near death” as a result of the “toxic and hazardous” emissions caused by the recurring fires at the New Providence Landfill.

Both residents interviewed yesterday expressed support for the suit. Ms Wells said she has already added her signature to the list of complainants, and Mr Rolle said he would look to join the suit in the coming days.

In the writ, residents are suing the government and Renew Bahamas for breaching their respective duties to ensure that adequate measures were taken to manage the landfill and prevent the fires and resulting “toxicity” from adversely impacting them and their “convenience of living.”

The residents are also suing the government in particular for breaching its “duty of care” by failing to “properly assess the danger of placing them so close” to the landfill and for not properly managing the dumpsite “so as to not pose a danger to the health and well-being of the residents of Jubilee.” Jubilee Gardens is a government subdivision.

The residents have retained the services of attorney Fred Smith, QC, to represent them in the class action.

Smoke associated with the most recent fire at the landfill site has affected scores of residents in southwest and western New Providence.

All classes at St John’s College were cancelled yesterday due to excessive smoke on the school’s campus and immediate vicinity.

When contacted for comment Director of Environmental Health Services Melanie McKenzie said she was in meetings most of the day and unable to visit the site.

Ms McKenzie referred all questions to Thomasina Wilson, senior deputy at DEHS with responsibility for all landfill sites in the country, who could not be reached up to press time.

With all the distractions with the Rony matter and taxi drivers using their vehicles for toilets (smh) maybe the attention will be focused now on this dump fire and a long term solution. Also whatever happened to the 30 suspects that were arrested under the drama of low flying helicopters, dazzling lights, arc bikes dozens of police cars and an entire community being awakened and many harassed at 5 a.m. How many persons have been charged thus far? How many have been released? And as the police spokesman said ‘these are only some of the resources we have.” Records will show when the police become hostile towards a community and appears to be overly aggressive, crime increases. The general population tends to stay silent against the criminals rather than supporting the police.

People will start having respiratory problems.

The FNM;s made this issue a PLP Issue now it is their problem. What is the name of minister of environment again, he was there front and center. Now he has gone BLANK a confused man lost in the wilderness.