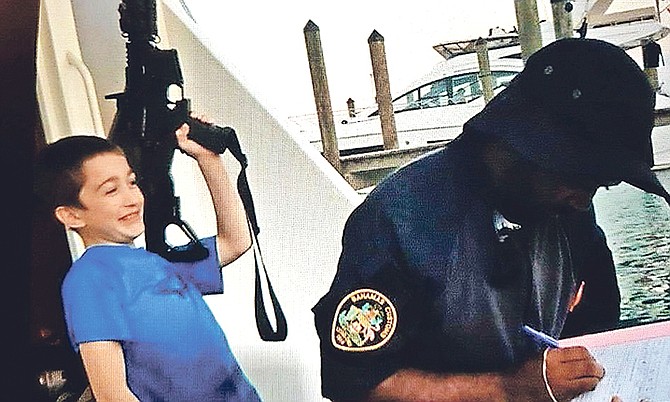 An image circulating on social media reportedly showing a youngster with an M4 automatic weapon as a tourist’s boat is being inspected by a customs officer.

AUTHORITIES are investigating the circumstances surrounding a condescending and controversial social media post made by an international boater, where he scoffs at the ease in which he was able to transport firearms into The Bahamas.

Deputy Prime Minister Peter Turnquest and National Security Minister Marvin Dames yesterday confirmed the Customs Department was aware of the post and looking into its circumstances.

In the Facebook post, a user by the name of ‘Jay Like’ posted photos of his declaration process, where he presents what appears to be high-powered rifle and pistol to a Bahamian customs officer.

He went on to detail a brief exchange he has with the officer, writing: “Q: Do you have any weapons? A: Yes, fully automatic machine guns. Q: Can you get them? A: Hey buddy, go grab the M4 for the nice officer, ok dad.”

The latter part refers to the poster’s son who was pictured brandishing the assault rifle with a smile.

Mr Turnquest, when contacted by The Tribune and presented with photos of the post, said he was working to learn the details, primarily the processes that permitted the declaration.

Mr Turnquest added: “I am led to understand that the foreign vessels can enter into our waters with up to three firearms which must be declared at the first port of entry and officially declared exported on leaving the Bahamas.”

The East Grand MP said clarification on the policy would have to come directly from the Bahamas Department of Customs.

However, officials at the Department of Customs could not be reached for further comment.

Please. . . both the officer and the boy have "ghost spots". . .hahahahahahahahahahahahahaha. . .do we need President TRUMP TO TELL US: "RELAX. . .TIS FAKE NEWS MON". Also. . .I cannot recognize the model of the gun. . .but an M4 she is do not look like. . .may be a toy! Colt M4 with mk.18 CQBR upper receiver-aimpoint and back-up iron sights is the closet that picture comes to the M4 family!

I wish for once that the DPM would say "I don't know anything about this, I'll refer you to my technical experts" in anything finance, technology, whatever. listening to Kwai Thompson's amazement that white people could program a wearable was shocking. He nevertheless went on the trip to Texas where Dr Minnis told the tech company mid managers that we have electricity..

So what about the 30 people arrested in the dark of night for large quantities of drugs weapons cash stolen cars... two weeks done gone...anyone charged yet? The police must be accountable.... especially when they are operating with another country against Bahamians!

Photoshop? Seems like a weird photo. Do customs officers have a habit of boarding a boat alone. I don't think any officer would turn their back on someone Knowing there were guns around. Even if the guns were on the ground, it just doesn't make sense. Eyes on everyone. Trust no one. Forget about smuggling you want get home to your wife and kids and not get shot in the back.

It's strange that they look at this as "the American way" though, this is the same pose used by the taliban children

Some private vehicles re not even boarded, depending on the availability of customs and immigration officers. They would call in and make their declaration by phone, then turn in the paper work later. In the Northern Bahamas this is not unusual because of the number of vessels moving back and forth from the US.

......and we keep wondering how all the weapons get into the Country!