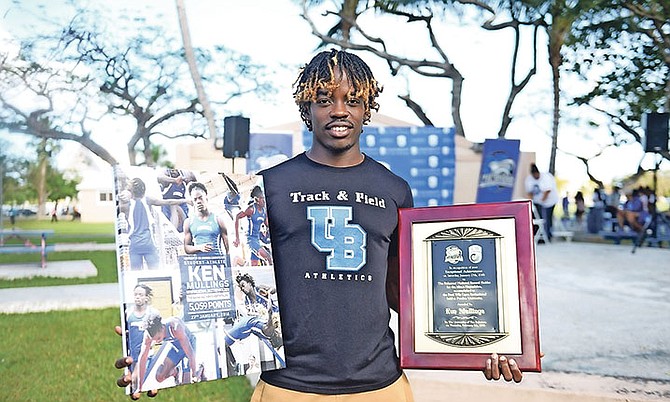 Ken Mullings, a decathlete on the UB Mingoes track & field team, was honoured by the university with his very own day, ‘Ken Mullings Day.’

It was the Ken Mullings Day yesterday at the University of the Bahamas as they honoured their most versatile athlete for breaking the Bahamas men’s heptathlon national indoor record as a member of the Mingoes’ track and field team.

Mullings, accompanied by his mother, Eulease Mullings, along with his twin sister Kennedi and brother Aaron Mullings, accomplished his feat at the 2018 Fred Wilt Invitational at the Lambert Fieldhouse at Purdue University in West Lafayette, Indiana, two weeks ago as a part of the 14-member team that represented UB.

In achieving his accomplishment, 20-year-old Mullings shattered the previous indoor record of 4,141 points that was set by Desmond Major at the NJCAA Championships on March 8, 2014, by accumulating a total of 5,059 points.

Dr Rodney Smith, the president of the University of the Bahamas, made the proclamation of the Ken Mullings Day in his remarks to the audience that included faculty, staff and the student population.

Before he made his remarks, Smith invited the entire Mingoes’ track team to join him on the podium.

“I really want you to see the number of student-athletes that represent you on a daily basis,” Smith said.

“These are the heroes who go out there and make things happen. These guys in the black shirts, this is the track and field team that travels around the world and makes things.

“They are the ones like Ken, who come back and bring home the championships, breaking records, making things happen. This is a young team. The Mingoes are a year old and their presence is being felt all over the world. People know what’s going on with the Mingoes.”

As for Mullings, Smith said he was able to put the fledgling Mingoes on the map and bring more awareness to their striving athletic programme as the Bahamas continues to be a powerhouse in track and field internationally and they are doing their part at the University of the Bahamas in ensuring that their athletes achieve their success. “Ken Dowdy, a long time director of the Penn Relays, said that the five S’s of sports training are stamina, speed, strength, skill and spirit, but the greatest of these is the spirit,” Smith quoted. “Ken has shown time and time again that he possesses all of those in great measure. “Therefore, as president of the University of the Bahamas, it is my pleasure to declare today, February 8, 2018, the Ken Mullings Day.”

Kimberley Rolle, the Athletic Director at the University of the Bahamas, called it a historic day because there are very few institutions that can claim a national record holder in their midst.

“What Ken represent is the best in the Bahamas and he has done as a University of the Bahamas student-athlete and we thought that for a brief moment that it was worthy of recognition,” she declared. “Ken we want to say how proud we are of you. You are a good role model as a student, as an A-1 athlete.

Rolle said the Mingoes’ Athletic Department will continue to support him as he ventures on becoming a University of the Bahamas Olympian. She said they have the resources and the support from the president’s office right down and they are expanding, growing and developing with more record breakers as they ride Mullings’ tide.

Mullings, who began his tenure at the University of the Bahamas in 2016 as a Physical Education major after graduating from CC Sweeting High School in 2015, said his goal now is to shatter the Bahamas national outdoor decathlon record of 7,421 points that was set by Antonio Greene at the Central American and Caribbean Championships in July 1989.

And he indicated that he wants to prove that he can do it as a member of the Mingoes as he indicated that’s he proud to be a part of the University of the Bahamas and he’s doing his thing right at home.

“I’m really honoured to have a day name after me. I’m excited and overwhelmed,” said Mullings after the ceremony in which he was showered with a number of gifts. “It makes feel excited that my hard work is paying off.

“When I got the record, my mind went back to my coaches, Mr (Rupert) Gardiner and Mr (Ednol) Rolle and the hard work they put in. I also want to thank God for giving me the strength to accomplish it, Mrs (Kimberley) Rolle for giving me the opportunity to represent the University of the Bahamas and my family, including my mother and father, and all of my team-mates, who have been there supporting me from day one.”

Once he can improve on his clearance in the pole vault and his run in the 1,500m, Mullings said he can and will add the outdoor multiple event record to his ledger before he graduates from the University of the Bahamas.

“I believe all things are accomplishable,” Mullings stressed. “I am just overwhelmed by how many people came out to support me today. It just shows what can be accomplished with what we have right here at home. I intend to prove that I can do it coming right here out of the University of the Bahamas in the Bahamas.”

His mom said her son is a determined young man, who deserved everything that he got.

“He has his eyes on the gold and he sticks to it,” she lamented. “I was happy when he broke the record. I’m a very proud mother. Words can’t explain how I feel when it comes to his accomplishments in track and field.”

Rolle, one of the coaches of the team, said Mullings epitomises what every coach looks for in their athletes as he presented him with a montage of his performance.

“In track and field, you have many events. You have the jumps, the sprints, the hurdles, the throwing events and there are persons who are skilled or better in one of those events,” Rolle stressed. “Ken, however, is very skilled in all and to be the best in the Bahamas, national record right here in the Bahamas at the University of the Bahamas, is a big accomplishment.”

Rolle said while he helped prepare Mullings in the sprints and the hurdles, Bradley Cooper assisted him with the throws, Mr (Ronald) Cartwright and James Rolle with the jumps and Mr Rupert Gardiner all of the athletes who helped him in his training.

“In my nine years of coaching, I must say, this is the most disciplined and dedicated athlete that I have ever coached,” Rolle stated. “I just want to say congratulations and push on. It’s not easy as an adult, it’s not easy as a student-athlete to do what he has done and still maintain his grades.”

Aaron Cox, a member of the athletic team, presented his best friend Mullings with a plaque that read: “In recognition of your exceptional achievement on January 27, 2018 as the Bahamas national record holder for the heptathlon accomplished at the Fred Wilt Open, held at Purdue University, awarded to Ken Mullings by the University of the Bahamas on Thursday, February 8, 2018.”

Avery Thompson, one of the senior members of the track team, said Mullings’ accomplishment is something for all of them to emulate.

“It’s something that anyone can achieve, but I’m just happy that it happened for him,” said Thompson, a hurdles specialist. “We go out there hard training every morning at 6 am and so it’s not an easy task. I’m very proud of what he was able to accomplish. If he can do it, we all can do it too.”

Stuart Hanna, the president of the Student Government Association, made a presentation to Mullings on behalf of the student body and he was presented with a gift from Aliv by Ranechea Ellis, their marketing executive.

Also on hand for the ceremony was Julie Wilson, the head of the Athletic Department of CC Sweeting where Mullings was coached by Dwight Garvey and Dereck Cummings as a member of the Cobras’ track and field team.

“It was fantastic. In all of the years I’ve been teaching, I don’t think I’ve come across a young mand that is dedicated as he is,” she stated. “That’s what he wants to do. He wants to keep getting better and better and he knows that hard work will get him there. I’m very proud of him. We are all very proud of him.”