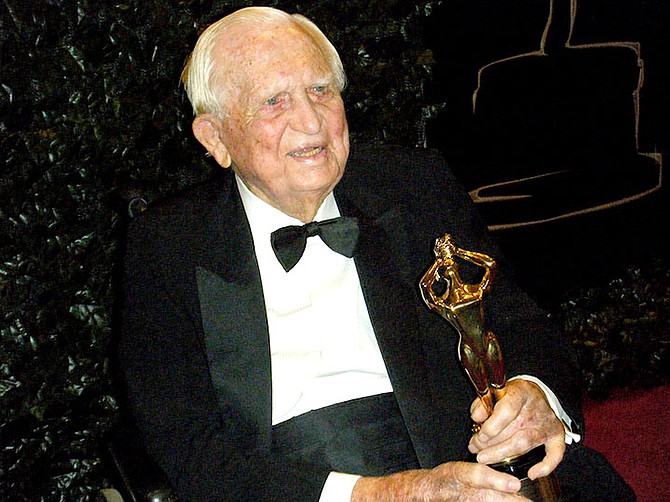 Sir Durward had been admitted to hospital earlier this week. He was surrounded by family and his minister as he passed.

He became the Bahamas’ first Olympic medalist when he won the bronze in sailing with Sloane Farrington in Melbourne in 1956. Then, along with Cecil Cooke, he landed the gold at the 1964 Games in Tokyo.

Sir Durward, who turned 100 in November last year, was also well known in Bahamian society as a philanthropist and humanitarian and was knighted in 1996.

He became the oldest living Olympic champion following the death of Sandor Tarics in May 2016.

Rest in Peace. You gave us all so much to be proud of.

if Bahamians want to emulate their life after someone, Sir Durward Knowles is that person

A holiday for our 1st Olimpian? RIP Sir Durward

A Man for whom ALL Bahamians should feel proud.

His life was so "perfect" that God even allowed him to celebrate his centennial ...... He should be one of the first life-size statues erected in a National Heroes Park ....... and not that thing that Fweddy wanted to set up in the back of the Botanical Gardens ........ This Park should be adjacent to Clifford Park either where RTD or the Cricket oval is located now.

When are we going to create these sacred spaces on each island to celebrate our heroes????

All hope begans fade once they did way Comrade Christopher Columbus. Somebody should've done looked into the public purse's resurrection the Spaniard.

Tal ........ should William Sayle, Woodes Rogers, Andrew Deveaux, William Whylly and Gov. James C. Smith be considered as Bahamian National Heroes????? ...... or do only Pompey and the Quiet Revolution generation qualify for the NHPark?????

Comrade, personally, don't see need park. Never looked at the Spaniard as a Nation Hero - but important mainstay of nation island's history. What we don't need is engage in some ridiculous judging contest but on the roles played by the individuals in getting us to where we are - the good, bad and the ugly - for they all have played roles in story where we comes from.

Not a Spaniard. Genovese, hence Italian. Big difference. Would be like calling you Haitian.

Oh I guess you didn't hear how the Comrade Explorer was made a naturalized Spanish citizen by the Spanish Monarchs... you know the Monarchs who sponsored his voyage, Ferdinand and Isabella

No, I had not heard of that. Maybe you should fill in this hole in Wikepedia's knowledge.

I am honestly disappointed with your response ....... Rethink your narrow perspective on who we should consider as bona fide National Heroes from Inagua to Abaco ...... Andros to Mayaguana.

Comrade, is there real value in list some elevated by politicians from common lawyer's robes to silk as Queen's Counsel?

If they ever build the promenade they should put statues every so often with a plaque saying what the person did. If at the Fort then on the top of the hill so they are overlooking the island and people will go and see. To put it in the back of the Botanical Gardens would mean no one sees them

A genuine National Hero! No blemish on his reputation. I admire his unselfish generosity, wholehearted commitment to our country and people without reservation and to his family and friends. Think about his image on a bank note as well as a statue. Ensure he is remembered!

Ma Comrades, had only the Bay Street Boys been more inclusive to have enjoined the blacks from over da hill to have participated in Bay Street's prosperity, I would argue, the "Pindling revolution" of 1967 might well have never been necessary - someting Comrade Durward even went as far as to apologise for the UBP's racial stands... in truth the only white man's so do and mean it.

In all fairness there are many for whom we should have national parks named after them.... pivitol in bringing freedoms enjoyed by many who are seldom ever publictly celebrated like Sir Etienne championing january, 1956 equality rights and many never mentioned or evr likely to ever be celebrated ....because they are not related to the nomenklatura or for other reasons.....Bahamians should simply have one National Park named "Our Almighty Lord and Saviour Park " and all political speakers, public speakers aspiring to serve the nation be allowed to make their speeches there.

And did you ever visit Regents Park tosee the Bahama Ducks swimming as they have for many generations now having been gifted by the Bahamas Governor during, I think, empress Victoria's reign?

He was a great Bahamian.