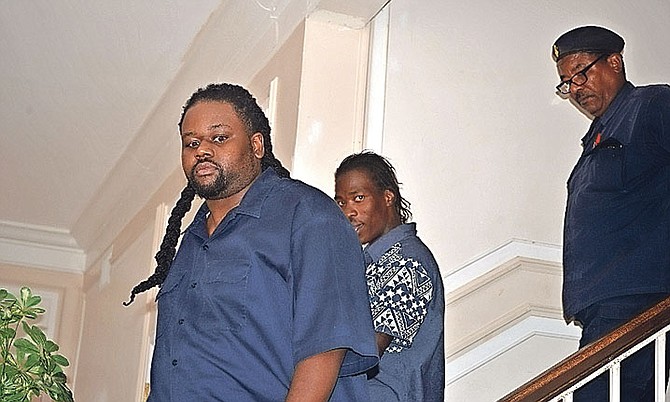 Clive G Wyatt, in front, and Delano Black, behind him, appeared in the Supreme Court in Grand Bahama for a bail hearing.

Clive G Wyatt, who is facing charges of possession of a firearm and ammunition, appeared in court represented by attorney Wendell Smith.

Mr Smith asked the court for reasonable bail with conditions for his client to report to the police station once weekly.

Prosecutor Olivia Blatch did not object.

Justice Hanna-Adderley granted Wyatt $9,000 bail with one or two sureties and ordered that he report to the Lucaya Police Station by 6pm on Fridays.

In a separate matter, Delano Black was charged with assault with a deadly weapon. Prosecutor Blatch noted that while Black has antecedents involving a case in which he was ordered to pay a fine of $2,950, she did not object to bail.

Justice Hanna-Adderley granted $5,000 bail and ordered Black to report to the police station every Friday by 6pm. She then advised him that he was not to have contact with the virtual complainant or any of the witnesses in the case.