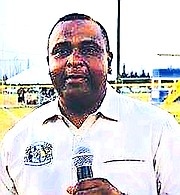 BBF president Teddy Sweeting confirmed through a press release that during their annual general meeting on December 2, the membership agreed to the following:

• Suspend all national operations until the Bahamas Baseball Association's elections are held in 2020.

• Encourage all baseball leagues (members of the BBF and non-members) to seek membership in the Bahamas Baseball Association.

• BBF to support the BBA, wherever needed, with the hosting of the 2018 National Baseball Championships.

When contacted for further clarification, Sweeting said it was a hard line decision, but one that they all agreed to in the best interest of the sport.

"We got them to amend the constitution and now we want them to go and properly set up the process so that members can now join and get ready for the next election."

As a result, Sweeting said the BBF has decided to cease all operations and will allow the BBA to function as the governing body on the local and international scene. Since the BBF was formed in 2003 with Greg Burrows serving as the initial president, they were able to host a successful national championships and carried a number of junior national teams to compete in various international competitions.

However, the federation, which had Craig 'Salty' Kemp serving as its second president before Sweeting took over from him, was not able to get into any of the major international tournaments like the Central American and Caribbean Games, which ultimately lead into qualification for the Olympic Games.

As the governing body for baseball in the country, the BBA, under its former president Jim Wood, who passed away in December 2014, still held the international sanctioning. Since Wood's death, Sam Rodgers has assumed the leadership of the BBA. He served as the interim president before he was voted in during the last elections held in 2016.

Over the last two years, the BBA has been working on bringing all of the fractions back under their fold with the BBF opting until now to join.

It's not known if Freedom Farm, which is still headed by Burrows, will follow suit. There are also one or two organisations in Grand Bahama that have not indicated as yet if they intend to join the BBA.

Sweeting, who served previously as the secretary general under the presidency of both Burrows and Kemp, said they were advised by the International Baseball Federation that the Bahamas is too small to have a division at the top of the governing body and they should come together and form just one body. "We only formed the Bahamas Baseball Federation back in 2003 because we were never assured that just the leagues will have the authority to vote for who they wanted to lead baseball," Sweeting said.

"That was why the decision was made to form the Bahamas Baseball Federation. Once it was formed, we went on with an aggressive programme to revitalise the sport and we have seen a resurgence of the sport over the past two decades."

With the BBA constitution now revised, Sweeting said the BBF agreed to cease all of its operations and will now allow their members to support the BBA and prepare for the elections whenever its called at the end of the four-year term in either 2019 or 2020.

With the formation of the BBF came the National Baseball Championships, which has been held in Grand Bahama to coincide with the inception of the federation in 2003.

Sweeting said it's their hope that the BBA will continue to provide the opportunity for the young baseball players from New Providence, Grand Bahama, Abaco and Eleuthera to come together and compete for the rights to be called the national champions.

Last year during the 15th year in hosting the biggest baseball tournament in the country, the federation honoured Antoan Richardson, the last of six Bahamians to play professionally in the Major League.

During its merger last year with some of the splitter groups in baseball, Rodgers and his administration indicated that they will be responsible for hosting a national tournament and sending the national teams off to compete, but they will not engage in a league as was previously the case because the BBF was formed.

Sweeting said the BBF will be prepared to assist the BBA in ensuring that the nationals continue this year.

As for his involvement in the past, Sweeting said that after working in the trenches for the past 20 years, he has decided to gracefully bow out and let the vision of the BBA unfold.

"Whenever the elections are called, I will then make a decision on whether or not I will come back and serve in any capacity," the former high school and collegiate baseball player turned banker by profession pointed out.

Looking back at what the federation has achieved since its formation in 2003, Sweeting said they had a productive operation and were able to watch as a number of young men got the opportunity to attend high school in the United States and got promoted to college and others have excelled to the professional ranks.

In December 2016, Sweeting said he got a chance to watch as nine of their Bahamian players suited up for Great Britain as they participated in the qualifying round of the World Baseball Classic, losing out in the championship game that would have advanced the team to the WBC Tournament.

Then two weeks ago, Sweeting said Todd Isaacs Jr and Lucius Fox got to combine their talent in producing the inaugural 'Don't Blink' Home Run Derby on Montagu.

"I want to congratulate them for putting on a first-class event for the public," said Sweeting of the derby that featured both local pro and international baseball pro players.

"That was the vision of the federation when we got started in 2003 to see as many Bahamians excel in the sport. We are so delighted to see them come back and put on such a memorable one for the fans."

Sweeting said he is now hoping that the membership of the federation will continue to make its contribution to the sport as they work with the association.

"I'm just going to take a break and see how it all unfolds," Sweeting said. "I think I've done my part and I feel it's the best decision for the sport and so I will just wait and see what happens from here.

"As I take a step back from baseball, I thank God for blessing me with the necessary leadership skills, vision, fortitude and, most importantly, patience over the years."

This was pure Evil, a divide and conquer hand over of hard work to the BBA a failed organization. When the BBF was formed there was a conclave, but after being isolated for 30 years the BBA grab the first offer that came their way, had i been the President of the BBA it would not have happen that way, the BBF had over 11 leagues, some are dormant, some got no real support and one had no where to play, but five leagues joined the BBA and this president said he is suspending the BBF, well he owes a lot of young baseball players an apology because the BBF suspended plenty of them for joining the BBA, but 5 leagues joined the BBA, and they want to suspend the BBF, wow! why didn't these 5 teams just leave the BBF??? this was pure evil.