Insight: Off Abaco The Water Is Crystal Clear But Golden Elkhorn Coral Is Shrink-Wrapped In Plastic 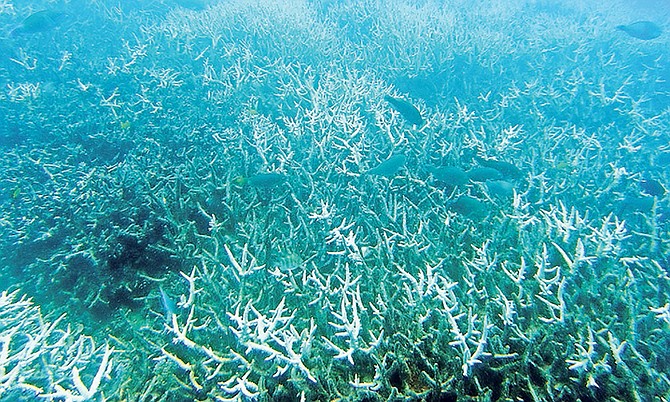 Bleached coral is a major problem - but selective breeding of coral may help.

That kid — there’s one in every school — putting up posters about protecting baby seals and organising beach cleanups? Yeah, that was me.

Years later, I’d finally achieved my childhood dream of becoming a marine biologist — just in time to witness the collapse of the world’s ocean ecosystems. I thought I’d be saving reefs. It turns out that’s a difficult thing to do. It felt like training to be a physician and then being unexpectedly assigned to hospice.

Reefs are of enormous economic value to us. They protect coastal cities from storms and support fisheries. A recent study found that revenue from reef tourism alone is $36 billion per year globally. The reefs of Hawaii and the Florida Keys account for $2.4 billion of that total.

Coral reefs are like underwater cities, inhabited by thousands of species, built up by the calcium carbonate skeletons of corals. Unfortunately, since the early 1980s, we’ve lost roughly two thirds of the world’s reef-building corals. Most of the Caribbean reefs I work on are now dominated by the skeletons of recently deceased corals, with living colonies sparsely distributed among the standing dead.

So how can we stop the destruction of coral reefs?

Step one is to deal with localised threats. Coral mortality caused by ocean warming is widely misattributed to pollution, although there are a handful of places where sewage and sediment are indeed degrading reefs. Impacts related to intensive tourism, mostly caused by anchors or people standing on corals, also need to be managed.

I’ve spent a lot of time underwater, removing plastic bags and fishing gear from corals, even on some of the Caribbean’s most remote reefs. Off the south end of Abaco Island in the Bahamas, for example, the water is crystal clear and the fish, including large sharks and barracuda, were plentiful. Yet nearly every colony of golden elkhorn coral we encountered was shrink-wrapped in plastic.

Most of the world’s tropical reefs have already warmed by 1 to 2 degrees Fahrenheit, causing corals to “bleach” and die during hot summer months. Corals literally turn white as they expel symbiotic algae living in their tissue. Ongoing coral loss and the catastrophic warming projected for the end of the century is fueling the search for more direct solutions to the coral problem, including actions that local communities can take to save their own reefs. These proposed remedies range from creative (if somewhat myopic) to nutty — from floating shades to block the sunlight that exacerbates bleaching, to cooling reefs with cold water pumped up from the deep ocean to alter the chemical composition of seawater and counteract ocean acidification.

One popular solution is to replant reefs with coral grown in offshore nurseries. Baby corals are attached to underwater scaffolding for several years until they are ready to be glued to a denuded reef.

This approach is promising. But to make a meaningful difference it needs to be drastically scaled up and better funded so that entire seascapes can be restored. There’s also the problem that we’re transplanting corals back into rapidly changing environments — which means they may not survive for long. All the threats that wiped corals out in the first place — disease, warming, acidification and hurricanes — are still present.

Coral restoration programmes are largely based on volunteer labour, so there is ample opportunity for education and community engagement. For example, the innovative Force Blue project is training retired Special Forces soldiers to transplant endanger coral species. Many of these veterans, including former Navy SEALs, find applying their military training to a global conservation mission therapeutic. Working underwater requires total focus; to get the job done, it’s essential to stay in visual contact with your dive partners, monitor your instruments and keep track of large predators eyeing you as a potential snack.

There is also a growing effort to develop super corals that can withstand warming seas. In Florida, Hawaii and Australia, this is being done by collecting corals that survived bleaching that killed off most their neighbors. Traditional selective breeding is then used to increase thermal tolerance with new generations.

Many molecular biologists I know dream of someday using cutting-edge gene editing tools to alter the DNA of corals. The current challenge is to identity regions where coral DNA controls thermal tolerance and then identity the unique genetic coding of individuals least sensitive to warming. This is a huge technical challenge.

Biologist Hollie Putnam at the University of Rhode Island, a leader in this nascent field, is working towards understanding the complex instructions encoded in every coral’s DNA that control its response to unusually warm conditions. Her team is also exploring the immensely complex cascade underlying this adaptive response, including the expression of genes, the release of chemical compounds and even communication between cells. This is the level of mechanistic understanding required to eventually design super corals in a lab.

Although this work could lead to fundamental insights about the evolutionary biology of corals, I’m sceptical about the practical value. Optimizing one characteristic usually comes with a cost and making corals immune to warming would likely make them more sensitive to other challenges and less able to compete in the wild.

Moreover, warming affects many corals indirectly — for example, by benefitting the micro-organisms that cause disease outbreaks. And the seas aren’t just warming; they’re becoming more acidic, less productive and the amount of oxygen in seawater, which is required by animals like corals and fishes to breathe, is decreasing.

Meanwhile, sea levels are rising and storms are becoming more intense. Then comes the matter of the creatures that inhabit reefs — fish, turtles, crabs, worms and countless other animals. They are also sensitive to temperature and other aspects of climate change. Preserving their habitat won’t help much if they suffocate or if their shells are dissolved by ocean acidification.

One of the oldest solutions is to restrict fishing to decrease the sensitivity of coral populations to climate change. The idea is that more intact food webs are more resilient to human disturbances. Unfortunately, tests on dozens of reefs indicate fishing bans don’t measurably help. The most striking example is the northern Great Barrier Reef off northeastern Australia. The reef is remote, protected from local impacts and has an abundance of top predators. But summer temperatures only about 3 degrees Fahrenheit higher than normal wiped out nearly half the reef’s corals in 2016.

In the end, these remedies — most untested and all unproven — are expensive and challenging and ultimately just a Band-Aid, a temporary fix. Transitioning the global economy to renewable energy sources, on the other hand, will not only save coral reefs — it will remove the threat to the rest of the world’s ecosystems and species as well. I support the search for short-term solutions for coral reefs. But the only way this ends well is if we radically reduce our carbon emissions.

This was produced by The WorldPost, a partnership of the Berggruen Institute and The Washington Post.