'This is the last ride' said missing sailor in video 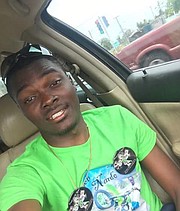 MORE than a week after his disappearance off the coast of Bimini, the family of Samuel Leroy Moss Jr, 23, is desperate for him to be found alive.

A Baha Mar lifeguard and avid sailor, Mr Moss flew from Nassau to Fort Lauderdale on January 13 to purchase a small fishing vessel, The Tribune was told. The last time Samminka Moss, 21, heard from her brother was January 14.

"He then drove the boat from Fort Lauderdale to Bimini and arrived in Bimini around 5pm," Ms Moss told The Tribune. "He slept in Bimini by family members (that night). Sunday morning around 7.45am he set sail to head from Bimini to Fresh Creek, Andros, to meet some friends.

"The friends said Sammy never reach to Andros. Sunday morning around 8.15am was the last time anyone has heard from my brother."

Ms Moss said the family has been in frequent contact with the RBDF since reporting her brother as missing.

"They have been very helpful."

Ms Moss has previous experience working with the RBDF. In February 2017, they successfully rescued her brother after an incident off Grand Bahama.

Ms Moss said: "He flew from Nassau to Miami to pick up a boat last year. He got stranded on the waters between Miami and Freeport. He didn't make it to Freeport.

"After I didn't hear from him for a few hours, that's when I contacted BASRA and the defence force along with a few others."

Mr Moss was stranded on the waters for about three days before the RBDF rescued him, his sister said.

When asked about the similarities between last year's incident and this current situation, Ms Moss said: "Last year he didn't carry any food or water, but this year he took food and water, sufficient to last him four or five days just in case he got stranded again or in case anything happens."

Ms Moss said her family is praying to God for her brother's safe return.

"My brother has always loved the water. Two things he loves (are) the water and helping people," she said.

"He has been going in the boat, sailing, diving, conching, fishing, from he was about 13.

"He would go above and beyond to help someone. If it was someone else trapped on water, and he had his boat he was going to go in wind, hail, snow.

"He has always been a person to go all out for others, whether you are family, friends - you could be a random person. You would click to him just because he has a bubbly personality, and he knows how to get along with everyone."

On January 14 at 7.54 am, Mr Moss recorded a Facebook live video as he sailed. He can be heard saying, "This the last ride. Last leg, daddy going home."

SAD to hear that very few people are showing interest in this story and, according to friends, little or no resources are being utilized to help find this young Bahamian. This is not related to the other two men who are deceased after ending up in the water when the small boat they were on apparently capsized. Hopefully the police is investigating that matter to determine exactly what happened since they were in a secure area. Did another vessel pass at high speed and cause them to capsize.

I feel for this guy's family left all worried.

as a boat owner, all i can tell you is that you can't just jump in an untested boat and head offshore. winter time, no gps, radio, single small engine... so many things that can go wrong here.

@John this is completely untrue. Many resources have been used searching for him.

This young man left Bimini as an artic-low was pushing through the Bahamas blowing a sustained 25 knots with gusts over 30 knots. There was a small craft advisory issued for the Northern and Central Bahamas. He was single handing a new boat (to him at least.) He didn't provide anyone with his route. Some family members seemed confused on whether he was going to Nassau, or Andros. Let this be a listen to Bahamian that believe they are 'men.' Take someone that has experience, let people know when you are going and exactly to where, don't go on a 21' old boat that you don't know (particularly single handing,) and don't go off shore out site of land when there is a small craft advisory. There were mega-yachts that waited for days after that weather passed through to head off shore... He posted a cell-phone facebook live as he was leaving. Surely someone in his family/in Bimini/on facebook, should have told him to get his ass back on land and wait out the weather... This was a very avoidable situation.