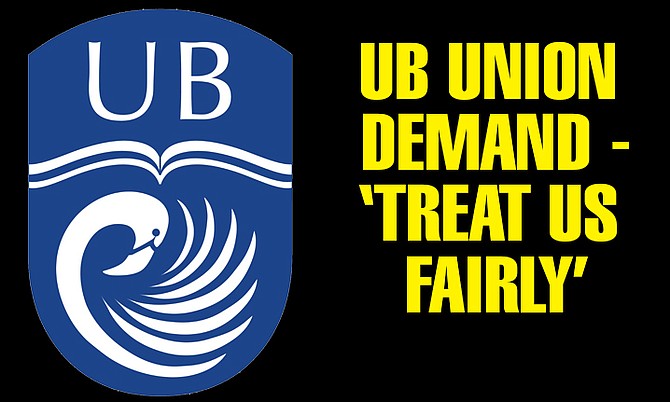 THE Union of Tertiary Educators of the Bahamas has raised concern over the University of the Bahamas’ refusal to negotiate a new industrial agreement, insisting any further delay could lead to major unrest at the institution.

UTEB claims the current administrative body at UB appears determined to undermine not just the terms and conditions of the signed and registered industrial agreement, but also to undermine the role of faculty members, their academic freedom and their ability to partner in the institution’s development.

In a statement the union also questioned an alleged decision to limit advertisements to members with doctorate degrees; place a faculty member on paid leave without just cause; violations in faculty overload payment; allegedly illegally stopping faculty salaries; changing the academic calendar’s dereliction of fiduciary duties and the undermining of the union through victimisation, discrimination and generally anti-union activities.

UTEB said it has always encouraged UB to work in a collaborative and consultative fashion, towards common institutional and national goals.

The union also suggested that since the arrival of the new administrative body at UB, and more particularly the new provost, officials at the institution have allegedly decided to work in contravention of the industrial contract and opted for a more “heavy-handed” approach to management.

UTEB’s indicated it has become necessary to take various matters to the Department of Labour to seek resolution.

Those matters include delays in promotions; the erosion of academic freedom and the institution’s failure to negotiate a new agreement in good faith.

Of the lack of promotions, UTEB noted: “These delays have caused a backlog of nine years of faculty advancement. The most recent exercise for 2010-2011 promotions has taken nearly two years to complete and candidates from that exercise are still awaiting the results. UB refuses to work with UTEB to carry out these exercises in a timely manner or to even see this as an urgent matter. It is now 2018 and the next exercise will be for the 2011-2012 academic year. This is demoralising and detrimental to faculty, their lives and their careers.”

With respect to academic freedom, UTEB stated: “The work of university professor is a very important one when looking at the role we play in the development of knowledge building and truth-telling.”

UTEB said academic freedom is essential to the work of its members and acts as the very principle that underpins the work they do.

“We are free to pursue truths without any infringement on how or what we pursue. It is time-honoured and it is the hallmark of any valued institution of higher learning. A part of this is the right to teach our classes as we feel best fits. It is beyond teaching styles, it speaks to a right and responsibility to ensure that what we teach and how we teach it is done so intact and with integrity,” Wednesday’s statement added.

“UB has failed to formally name a negotiating team, as per clause 8.1 of the memorandum of agreement as well as the normal action taken when there is a new agreement to be negotiated. The names of (the) UB negotiating team was not given to UTEB in a letter from the chairman of the board of trustees. The president insisted on naming the team and, for legal reasons, it is important to know the difference. The union negotiates with the board of trustees, not the president of UB.”

Other allegations raised by UTEB included the failure to continue negotiations; the intimidation of union officers; the habitual failure to provide the union with agreed reports; suspension of meetings of the Professional Leave Committee; failure to convene Faculty Development Committee and the termination of faculty contracts without just cause.

In an interview with The Tribune yesterday, UTEB President Jennifer Isaacs-Dotson said the union was at its wits-end and had no idea how it could proceed with the current administrative body of the university.

Mrs Isaacs-Dotson, now a senator, contended the university has shown no interest in doing what is considered right by the most recent industrial agreement, all while pretending that the union doesn’t exist.

“It’s shocking,” Mrs Isaacs-Dotson said. “They know and have known for some time now how this process should unfold. They have intentionally worked around us and have refused to speak to us. We have tried repeatedly to communicate, they’ve seen my letters and they’ve seen my correspondents. Still no reply.”

Mrs Isaacs-Dotson said UTEB acted as professional and cordial as it could in this circumstance and has, on several occasions given the university and its administration opportunities to “get their stuff together”.

However, Mrs Isaacs-Dotson said nothing has changed and UB, for whatever reason, has opted not to negotiate.

She said a meeting is scheduled with Minister of Education Jeff Lloyd in a few weeks.

“If these matters aren’t resolved then, we will lay them before the feet of the minister. If they aren’t dealt with there, we will proceed to the Labour Board,” Mrs Isaacs-Dotson added.

When contacted for comment yesterday, Education Minister Jeffery Lloyd confirmed that reports of the longstanding issues had reached his office. He also indicated his office has scheduled a meeting with both parties in the coming weeks, where he said he hoped to broker some level of resolution between the two sides.

Attempts to contact the University of the Bahamas were unsuccessful up to press time.

it's a union in the Bahamas = it isn't doing anything good for the place of business. And really teachers at UB want a raise..... why not fire the whole lot and rehire from scratch? Is that an option?

Once I see the word union I tune out. Bunch of cry babies.

if you like lifetime contracts such as the one at the bridge authority, you will love the hereditary ones at UB.

If a bahamian walks off the street to apply, he needs a PHD.

But, they find a way to hire "instructors" with fewer qualifications who are the children of retiring COB faculty and then let them upgrade themselves to PHd level.

Soooooo, what you are saying is that once a family member is in the door, the children straight???? ....... You are hired on faculty/family recommendation??