Face To Face: Nursing Came Before Everything. I Even Took My Dad To The Prom

I spent hours on the top of Blue Hills in New Providence at the home of a sprightly and dainty Bahamian grandmother.

Nurse Linelle Thompson greeted me in her garden where she cut a few bananas from a bunch for our breakfast alongside freshg papaya and jujube fruit (known to Bahamians as juju). As she began to talk about her alkaline diet and healthy, natural lifestyle she made a sea moss smoothie for us. A great way to start a long and pleasant interview.

Nurse Thompson is now retired from nursing, putting her time into sewing, crotcheting, gardening and being the matriarch of her family. Her husband, Bob Thompson, is an epic veteran photographer, one of the first Bahamians to study photographic art and motion pictures in the United States. The have been married for 45 years and are parents to three sons and two daughters. They are both spiritual and as nature lovers, they have built a humble hilltop sanctuary together.

Nursing though, which was her life, remains a passion.

Her parents, Dorcas Heastie-Burrows of Acklins and Leon Burrows of Governor’s Harbour, Eleuthera were living in a home on McCartney Street right against the Collin’s wall where she was born. She was the last of their children to be born at home and in her life, she has become an advocate for the cause of increasing the awareness of the awesome possibilities of at home, midwife assisted births and for breastfeeding.

“When I was four years old I knew what I wanted to be,” She recalls, “A seamstress, an actress, and a nurse – and I have done all of those.”

“I wanted to go to London to study nursing, but I was so tiny, my mother was afraid to let me go there to study by myself. She had lined up some work for me at the airport and told me that when I graduated, I would be going there to work. I knew I wasn’t going to go to the airport to work; I was determined to be a nurse. There was a careers fair happening at my school, The Government High, and there, representatives from the School of Nursing announced that a new programme was starting, which would allow nurses to gain the necessary international certification right at home. It was my opportunity and I signed up. Eventually my mother was very supportive as I pursued my nursing studies. When I graduated from Government High, I didn’t carry a date to the prom like the other girls. I took my father. I didn’t know how he would react if I asked him to carry a date.”

She benefitted from having the love of her parents and her siblings. Her father was industrious and over the course of her childhood, he would purchase lots in better communities and build bigger homes three times. Their first move was to ‘the five-pound lot’. Before 1966, The Bahamas used the UK currency the pound. Many Bahamian families got their start by purchasing a lot in this community near Kemp Road.

1967 was a poignant year in Bahamian history – majority rule; Sir Lynden Oscar Pindling becomes the first black Premier as the Progressive Liberal Party assumed government; and so many other firsts happened for Bahamians. Among them, Nurse Thompson and a group of young ladies with bright hopes for their careers would be the first to enter the School of Nursing and live in a dormitory at the Princess Margaret Hospital (PMH). Last October, this group of pioneering nurses celebrated “50 years of history in the making for nursing in The Bahamas” as they were the first internationally certified group of nurses who did not have to travel to London for training.

Five decades later, Nurse Thompson is still seeing the correlation between the dire need for improved healthcare for pregnant mothers and babies and a sick, violent nation. She is calling on health officials to immediately consider the necessary steps to transform PMH into a “baby friendly hospital” as it would help “save the nation”.

“We (she and two other nurses) tried to address the need for a breast milk bank in The Bahamas,” she said. 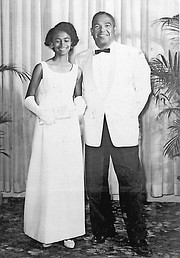 Linelle and her dad attending prom.

“We met with Ministers of Health over the years and presented our proposal because we received training while at the University of London on how to establish a human milk bank. We were unsuccessful in our attempts due to other ‘important issues’ happening with with that Minister, and when the following Minister took over, there was something that took priority and hindered us. There are human milk banks in London and in America and when the earthquake struck Haiti, America sent human milk and not formula for the babies.

“It is my passion that our hospitals be established as baby friendly, that a human milk bank is formed, and that we have certified lactation counsellors to ensure that Bahamian children are breastfed, having the best possible start in life.”

The connection established at birth with breastfeeding has been alluded to as an important link in decreasing violence. Nurse Thompson believes that more connective and less violent practices at birth would leave a positive, long-lasting effect on the citizens of this country.

Her suggestions include completely revamping the maternity ward so that mothers and babies get to stay together after the delivery, rather than being separated for long periods. She wants to see hospital administration make the decision to stop giving free formula to babies at birth, prompting more mothers to take the time to learn to breastfeed. During this time, she says, the babies’ number one form of immunization - colostrum - is coming from the mother’s breast.

She also wants to see a family-friendly ward, where extended family members have a lounge where they can stay around and be of more support to the mothers and babies during the first hours of life.

“Another important element is implementing skin to skin between mother and baby for the first hour after birth; but staffing support and resources are needed for this,” she said.

“Mothers are given black tea, which has caffeine, before they give birth. This hinders the flow of oxytocin in the body. Herbal tea should be given instead. These are some of the key things we can do to totally change the experience of the child at birth.”

“While at the University College of London where I pursued a Master’s level course in breastfeeding policy and practice,” she says, “they showed me the guts of two babies (side by side). One with formula and one with breast milk. The gut is coil-shaped. When the breast milk went down, it lined it, coated it and sealed it, making it bacteria-proof. When the formula went down, it stretched the gut.

The formula reduced the strength of the immune system, increasing allergies, rashes and runny noses for the babies.

As a nation, Nurse Thompson said “we are racing for cures for what we have caused to our nation instead of racing to prevention. We are so wired into having successful businesses and making millions that we forgot to take time out to build the foundation of the next generation and ignore the mountain of disease we are building through our lifestyles and choices.”

“It’s too late if we are waiting for a tsunami of national problems before we do something positive like equipping the youth to embrace strong values, healthy living, fear of God and the necessity of honouring and respecting our parents and elders. Almost every prisoner is in prison because of this issue of disrespect.”

Nurse Thompson practices what she preaches. As a nurse, she has shown by a life example that healthy living pays off, and preventative care is mandatory in medicine.

As a wife and mother, she has shown that devotion, loyalty and family unity brings the most fulfilling life.

Even though she is no longer a full-time nurse, she is still active in the Bahamas National Breastfeeding Association and will not give up her lifetime cause.

She has taken time out to look at some of her other passions, including art and poetry. She is currently preparing to soon publish her first book of poems: “From The Heart of The Owl” – so named because her parents called her night owl from she was six months old. She and her sons are illustrating the book.

One rendition reads in part: “The wisdom and strength she holds, deep into the night, will teach the willing student that will walk into the light”.