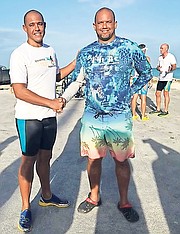 BROTHERS Cameron and Dorian Roach, once considered among the top swimmers in the island nation, have switched their gear to triathlon where they will carry the Bahamian flag at the 2018 Commonwealth Games.

On Sunday, Cameron Roach beat out a strong six-man field at the Bahamas Triathlon Association's trials to earn the one spot on the Bahamas Olympic Committee's contingent that will head to the Gold Coast, Australia, for the games, April 4-15.

Using his strong background in swimming, Roach was the first competitor out of the water in the 750-metre swim in 14 minutes and seven seconds; maintained his lead in the 20 kilometre bike in 32:13:00 and coasted to victory in the 5K run in 22:13 as he finished in an accumulated time of 1:08:32.

Simon Lowe didn't finish the course and Ben Derbyshire didn't start the trials that was sponsored by Powerade and Race PROMPT.

Dorian Roach, the older brother at age 42, will travel as the coach of the team. He said he's really excited about the accomplishment of his 39-year-old brother.

"We are glad that we got this opportunity to qualify to go," said Roach, who serves as the president of the BTA that was revived in 2015 and has made great progress in the past two years.

"Cameron has been doing really well in triathlon and I think he will do even better because we have a very vigorous training programme for him leading up to the games."

For Cameron Roach, it's a honor to be able to represent the country in what he called a "growing sport" in the Bahamas.

"We just got notification from the BOC that they had one spot available for triathlon, so we had a few weeks to get prepared and everybody came out and gave it their best shot," he said. "I felt really good. I felt very strong.

"I had a very good swim at the start and a nice lead in the bike and I finished strong in the run. Now I have two months to prepare for the Commonwealth Games where I will be going up against some of the best competitors in the world."

Roach said this achievement for both he and his brother, whom he emulated from the time they were swimming, is a great moral booster for the sport of triathlon.

"I'm hoping that I can set the stage and encourage more of the younger guys to come out and compete in the sport," he said. "In four years time, hopefully one of the younger competitors will be competing for us at the games.

"So I'm really proud that I have gotten this opportunity to represent the country. I'm looking forward to going out there and doing my best because I know I have a chance to do something great for the country on the whole."

And there's no better feeling than to be traveling with his brother as the coach.

"I've always looked up to him back in the days when we were both swimming," he pointed out. "He set the standard and I tried to come behind him and improve on what he did.

"He's my best friend, so it's nice to have someone like that there supporting me. We actually compliment each other because we know each other very well."

In preparation for the games, Roach said he and his brother intent to increase their training regime to at least twice a day to get ready for the challenge ahead of him.

"I know that I will have to put in my time so we will be looking at moving from one workout to at least two a day," Cameron Roach said. "I know I have to improve a lot more on my bike and run, but if I can get out there in a strong swim, I know I can be in a better position to compete in the event."

Roach said he's really excited because it's been a long time since he has represented the Bahamas and to go "down under" in Australia where most people would like to go if they haven't visited yet, is an added plus.

"I'm also excited about meeting some new athletes in this field in the world and I'm looking forward to also traveling with the rest of the elite athletes who will represent the Bahamas at the games."