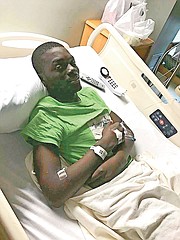 A BAHAMIAN sailor who was reported missing two weeks ago was rescued by the United States Coast Guard on Monday afternoon from a boat taking on water off the coast of Florida.

According to the US Coast Guard Mr Moss was “rescued from a vessel taking on water Monday approximately 10 miles east of West Palm Beach, Florida.

“Watch standers at Coast Guard Sector Miami received a notification from a good Samaritan of a vessel taking on water with one person aboard,” the Coast Guard said.

“Watch standers diverted the Coast Guard cutter Cochito crew. They arrived on scene at approximately 3.30pm and medivaced the man via small boat to the Revere Beach fire rescue due to him suffering from a possible chemical reaction.

“Coast Guard 7th District watch standers confirmed that the man, a Bahamian national, is the subject of a previous overdue case.”

Mr Moss’ sister, Samminka Moss, 21, briefly spoke with The Tribune yesterday. She was elated at his rescue but said she had little information at the time about his time at sea.

“All I know is that he was found close to Florida, about 10 miles off of Florida. He is in a hospital in (West Palm Beach, Florida).”

Their prayers have been answered.

In a Facebook live video which has since been deleted, Mr Moss, while in hospital, briefly recounted his trip. He explained that during his trip, he realised he had issues with his GPS and gas gauge and also encountered rough seas. He said he went on land in Andros, where he encountered wild animals and sought refuge in a tree. He said he fell from the tree and was injured, then left Andros to continue sailing.

In February 2017, Mr Moss was stranded for three days in waters off Grand Bahama. According to Ms Moss, her brother was rescued by the Royal Bahamas Defence Force (RBDF) at the time.

Ms Moss said during that experience, her brother had no food rations. This time when he left for this trip, she said “he took food and water, sufficient to last him four or five days just in case he got stranded again or in case anything happens.”

there might not be a third time for you.

go learn to navigate without gps and get some training in safety.

seamen and airmen needs to check the weather report every morning.

This dude has as many lives as a cat!

You might say the media and government basically ignored this matter for near two weeks. But all's well that ends well.

This story makes no sense... Why in the hell if you're going from Bimini to Nassau, would you go to Andros?

Why did he go in a tree and if he was actually some how on Andros, which I personally don't believe, did he go back to sea in his boat?

I am happy for his sister he is safe, but this is perhaps the most ignorant boating story I have ever heard, and makes 0% sense...

Most likely the guy is suffering from Hysteria. Plus he was drifting

Bimini to Nassau, the route is over the Grand Bahama Banks to North-west Channel light at top of the Tongue of the Ocean. This is close to the North end of Andros. Sheep Cays are fairly close to Morgan's Bluff. Was in a boat that ran up on a reef there one night many years ago making this same passage. before GPS.

the previous Tribune article did say he was stopping in Andros to visit friends and to refuel..which part makes no sense?

This dude should be banned from owning or operating a boat. He is clearly a little off. He preferred to sleep in a tree than on his boat?

It's rough, I don't know how much gas I have, I don't know which direction to go to get to Nassau, I'm injured, I most likely have a CB Radio and a phone, I'm on dry land. What should I do??? Let me get back in my boat a head out to sea. I should be fine.

Smh, they need to make him a take a mandatory boating course because clearly he doesn't know what he's doing.

Missing at sea two times in a year...smh. He's lucky, some people don't live to tell this tale once much less twice.

Furthermore it's using valuable resources to search for him when all this could have been prevented by a simple judgment call.

serial boat sinker! do you think they will send him a bill for the cost of his rescue? it's probably multiple times what he paid for the boat he was in!

Agreed .......... how can a person have a driver's license to use a car (on land) ....... but no such license to operate a motorized boat where there are far greater implications for danger???

Thank God for a happy ending.