Robinson: No Contracts From Ministry 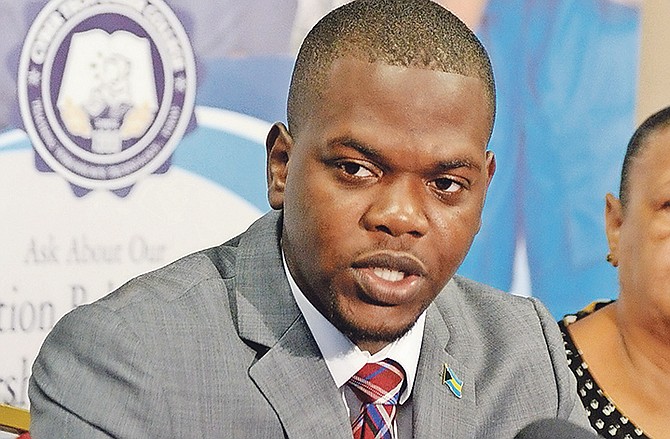 BAIN and Grants Town MP Travis Robinson has suggested speculation that his new consultancy business could be set to receive lucrative contracts from the Ministry of Tourism and Aviation is baseless, adding the concerns only came to light through anonymous sources on social media.

In an interview with The Tribune on Friday, Mr Robinson was adamant his company – Consult Bahamas Ltd – would not even accept an agreement with the government if one were offered.

He was asked on Thursday to disclose whether the government had engaged his newly formed company, but he declined to do so.

However, when this newspaper contacted him on Friday he said the company has “zero” contractual agreements with any government ministry.

The former parliamentary secretary in the Ministry of Tourism and Aviation formed the company nearly two weeks after Prime Minister Dr Hubert Minnis fired him from that appointment for voting against the value added tax increase.

“It is not for government,” Mr Robinson said. “And I will not even if it is proposed or given the option to accept. I will not accept any government contract.

“This has zero contractual agreement with any government ministry whatsoever.

“This is more so for young Bahamians who would like to start up their businesses in the tourism industry and so I would be that bridge between them and their business or their idea to basically consult them on the steps that they should take when coming to the Ministry of Tourism or tourism professionals or people in the industry.

“(It would be) consulting in what they should have in their proposals, what it should look like and making the connection between various tourism businesses and their start up companies that they would like to carry on with.”

Asked to respond to critics who say he has little experience having only served in the ministry for a short time, he said: “If I was a consultant for the government then I could understand that arguing point.

“(But) I am a consultant for young persons like myself who only need to know ‘where do I even first apply or where do I start?’ Basic information that many may think is simple but those different critiques in their business proposals make a huge difference.

“So I’m not going into some exquisite field of in-depth research and all that stuff, no. I simply want to lend the little experience that I got in my capacity, which I served, and to be able to offer that to young Bahamians who have an interest in the tourism field.

“Very clearly it is an avenue for young Bahamians who are interested in tourism to assist them with various proposals, offering them advice.”

Now he sees the nature of politicals . . . they have no real honest convictions on anything. . .they lie, deride, talk nonsense to support their party or view. . .these base persons are the scum of social dialogue. . . of which we have a load of them on this site! Mr. Robinson. . .their national hero a few days ago. . .as long as he could be "used" to beat someone or thing over the head with, they were all for his high moral stances. . .now he don't service their hoped agenda. . .NOW HE IS UNDER THEIR ATTACK FOR "SUSPICIOUS" BEHAVIOURS!! This is why I give them low and base operatives so much trouble on this site. . .they do not have the best interests of this nation at heart. . .they are like dumb dogs. . .will not bark to save another's life. . .except they can get a bone for barking!! Mr. Robinson that the political types are just that. . .low belly dumb dogs when it comes to honesty. . .expecting honest support from them is like expecting Brave Davis to be the next PM!!