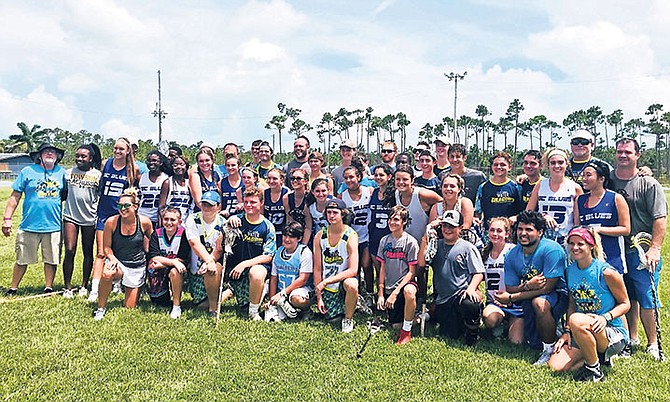 THE second consecutive Bahamas Bash Lacrosse Tournament was held in Grand Bahama June 29 to July 1 and attracted some 100 players, parents and coaches from Florida to the island.

The event, organised by Bo Lamont, director of Bahamas Bash Lacrosse Tournament, helps to promote the sport of lacrosse.

Bahamian athletes were also taught how to play the sport from professional players and team coaches attending the tournament. Among them, Kodia Rolle, 12, found it fun and a great way to keep physically fit.

“I’d like to thank Bo Lamont for returning to Grand Bahama Island once again this year for the second consecutive year. This tournament represents another event on the island that brings in a number of athletes,” he said.

Mr Chotoosingh reported that the number of athletes this year has doubled. “That represents growth where there are more booked hotel rooms and vendors benefitting from the event,” he added.

He commended the Ministry of Youth, Sports and Culture for assisting in facilitating the event, and working with partners to give the group the best rates.

The tournament caters to a mixture of boys and girls teams which travelled to compete in this year’s tournament. “It’s a pleasure to come here, we really enjoy spending time and interacting with the people,” said Mr Lamont.

The tournament aims to grow the sport, and organisers hope to continue bringing the sport to The Bahamas, and gathering support from other teams in the US. Said Mr Lamont: “We’d like to grow. More people came this year who are excited and want to spread the word when they go back and tell people that they should come to The Bahamas to play lacrosse. So, I would imagine next year we’ll have certainly more boys and girls teams in both divisions, so we hope to at least double in size.”

The sport of Lacrosse originated from Native America and is known as the healing game because of their belief that the game was given to them by the Creator for enjoyment and to promote healing to settle disputes and to help their spiritual development.

Chivvaun Smith, an MOTA representative, noted that the event was primarily focused on giving back, and the 2018 tournament added a humanitarian dynamic to the prestigious sport.