Davis Blasts Pm For Selective Use Of Westminster System 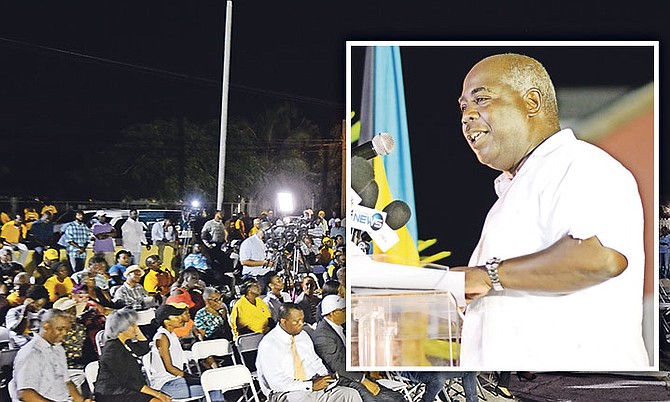 He was referring to Dr Minnis' decision to fire Travis Robinson, Vaughn Miller and Frederick McAlpine from their government posts for opposing an increase in value added tax last month.

Mr Davis hit on familiar themes for the PLP during the speech, attacking the FNM's supposed hypocritical talks about corruption while characterising the administration as unconcerned with the social welfare of Bahamians.

He claimed that Dr Minnis had told Parliament of an intention to sign a $5.5bn oil refinery deal with Oban Energy in the full knowledge that a deal had already been signed.

He said: "Why he misled Parliament? According to the Westminister system, to mislead Parliament is a grave and serious offence. And Minnis ought to have resigned. He never did! But all of a sudden backbench MPs have to go?"

Mr Davis faulted the way the administration applied the whip during the VAT vote.

"The prime minister should know that the Westminister system is a designed model of conventions and unwritten rules. And it is best served when the government elected to manage this system serves the nation in the spirit of honour and integrity. And so, if the whip is on as in this case with the 12 percent VAT increase presented in the fiscal plan of the Government, it was the duty of the prime minister to caucus and huddle with his MPs and inform them of the government's plan to tax the people.

"Minnis never did that. According to sitting FNM MPs, they were never consulted. Nor were there any arrangements on how to avoid the firings, which unfolded following the subsequent to the vote."

I truly believe this short pudgy corrupt fella with his dirty grubby stubby yellow sticky fingers has yet to figure out that no one is giving him the time of day. LOL

Actually, I felt compelled to read this article. Which was, as you say, another waste of time.

With all due respect, Opposition Leader Davis (And The PLP) need to disappear for a few more years, about 10 would be good. I'm aware it's unhealthy for a nation to not have a strong opposition party, sadly, however, the PLP and its current leadership is not an option. I am not some 'Roc Wit Doc' Cheerleader I am a Bahamian old enough with 1/2 a BJC to see that this man is a Slick Liar! I mean Lawyer!

We need to stop calling our system of government a "Westminster" system ......... We have a written Constitution that clearly lays out how each branch of Government must function ....... and it is very different from what happens in Britain ........ This is the Bahamian version of a Westminster-style government ........... but old colonial hacks like Brave cannot break with those English "pomp and pageantry" traditions (if only in style).

He just needs to give the public an extended vacation from his verbal antics and focus on why HE is not the P.M. and why/how the P.L.P. lost the publics confidence and voted them out of office and control !!!

Phiilip Davis can't speak on this matter.He misled parliament over the contractor for Bamsi insurance. He should have resigned then. For the PLP to be relevant again, he and the crew need to step down and go away. Better yet,the PLP should just disband.

A man with selective memory and no conscience. I wish he would just go away!

@sheeprunner...agreed we hav to stop calling dis Westminister...system....in a few days we will all see ghe politicians with highest national pride celebrating 45 years of independence.....and the next day afterwards after all the Bahamian flags put away.....the lawyers will put on dere white hairy wigs wearing dere englist outfits...referring roght back to their former colonial masters....an Westerminister system....

Because your system of taking care of the der cronies worked so well - every time you were asked why they were paid when they shouldn't have been and where was the money we got a resounding I DON KNOW.

Who broke the system more than your party Brave? When you lose an election the leader should resign! Pindling refused twice and Christie refused once. Then there's the issue of losing a referendum... You're supposed to resign. Christie LOST 2 flipping referenda... STILL REFUSED TO REISGN.

Brave, with all due respect for your position, not so much you as a person, GTFOHWTBS.

HE KEEPS REMINDING US WHY WE HATE THE PLP!!!