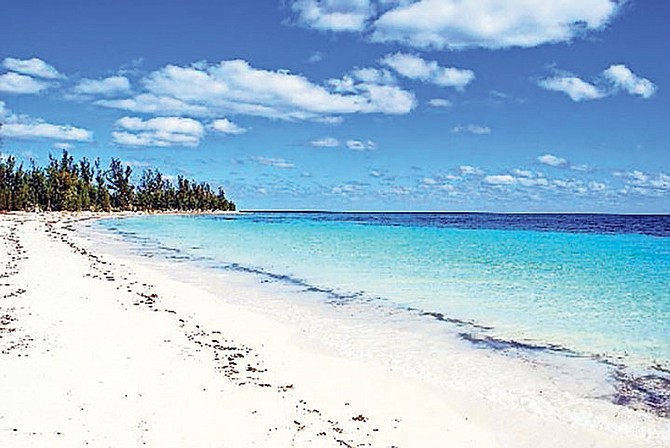 A popular beach on Grand Bahama has received a 'no-swim' alert by an international online organisation after failing to meet water quality standards.

According to Swim Guide.org, water samples were taken on June 28 at Taino Beach by Save the Bays/Waterkeepers Bahamas. The beach was marked in red based on the sample results showing it contained high levels of fecal coliform - over 141 Enterococcus per 100ml water.

She reported 'active investigations' are underway by the organization to determine what is causing the problem.

"What we are doing now is going into active investigation to try to figure out what it is now that is happening with the popular beaches on Grand Bahama, in particular, Taino Beach," she told reporters.

Ms Ingraham said they are aware Taino Beach is probably the most popular beach for tourists and Bahamians and want to ensure the safety of all swimmers.

She said while Taino has the 'no swim' alert other popular beaches have been given 'green status' on swimguide.org which people should use to check the status of beaches that are monitored.

"We hope to be able to monitor these beaches every week, but we are going to work on that as funding becomes available," she said.

"We look at what beaches are most used in terms of Bahamians and tourists. We go out there take samples, and so persons can use our resources through Swimguide.org and determine whether or not it is fit for them to go on the beach," she explained.

According to executive director, Waterkeepers Bahamas use products by IDEXX, a recognised firm that provides water safety tests.

"So we use that to determine whether or not there are high levels of coliform, such as urine or feces in the water," she stated.

She explained that usually when there is heavy rainfall, there will be a high level of coliform in beach water because the rainwater flows down to the beaches.

"When we notice there are beaches continuously failing those tests, there is cause for concern now because it means that something other than rainfall is causing this to have these results," Ingraham stated.

"Taino Beach is the tourist centre and we want to be sure that those using the beach and using our information, and using swim guide.org are being reassured that we are doing our job, and making sure we are giving them answers as to why these things are happening," she said.

According to SwimGuide.org Waterkeepers Bahamas monitors 17 beach sites within the Bahamas, where samples are collected and processed by Waterkeepers staff, volunteers, and student cadets.

The samples are tested for Enterococcus at all sites, utilizing the standards US EPA criteria for 141CFU/100ml for collecting and analysing water samples.

It noted the beaches are marked green when single sample results are under 141 Enterococcus per 100ml. Those marked red have exceeded or surpassed required benchmark. Beaches marked in grey when there is no current information or water sample results.

Ms Ingraham assured that The Bahamas is blessed because of its natural currents, and the natural purifier in salt.

"When there is rainfall we know there may be some results higher than normal, but we are blessed, and we don't normally see results where beaches fail on a consistent basis," she said.

"When we go to SwimGuide and look at the Bahamas and the beaches we monitor and look at other parts of the US, they look at us as being blessed. So there is no cause for concern at this moment.

"But when you look at the Taino Beach situation where it is recurring now, we need to investigate that, and we need to protect the safety of all swimmers," Ms Ingraham said.


Waterkeepers Bahamas is a part of an international organisation known as Waterkeeper Alliance. There are over 300 organisations in 40 countries around the world that are part of the umbrella organisation.

Ms Ingraham noted: "It originally started under the Hudson Bay work when they realised there were similar problems in their bay and they wanted as fishermen to do something about it. They thought to get one of the most influential lawyers, Robert Kennedy Jr, to act on their behalf. And because he is such an environmentalist he worked to formed Waterkeepers Alliance.

She said the organization has grown rapidly in the last five years, with over 340 organisations worldwide.

"And so we have all these organisations doing the beach monitoring, beach profiling, and also putting together events… in order to educate people and get them involved in some of the projects that we are doing," she said.

The waters at the beaches of Baha Mar and Sandals Cable Beach should be similarly tested as they almost certainly contain unacceptable high levels of fecal coliform. Many of our visitors are swimming in very dangerous shiit, and they don't even know it. We live in a country that cannot properly manage public waste of any kind, and raw sewerage is at the top of the list. One can only imagine what's going to happen to the beaches in South Eleuthera with Sir Snake involvement as a resort/hotel developer.

Concerned that the Government is not conducting these tests. This should not be left to any private entity.