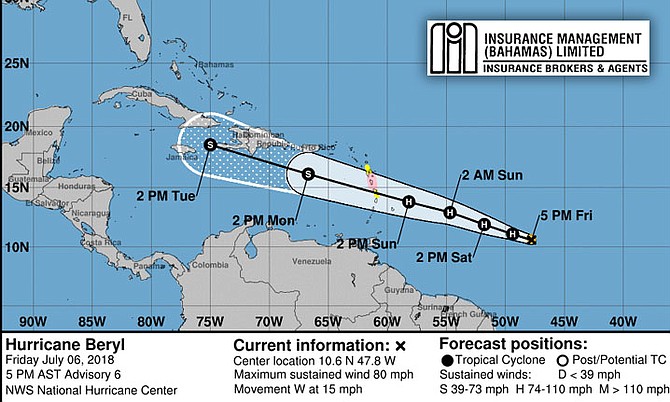 The hurricane gained strength Friday morning and was a Category 1 storm with maximum sustained winds of nearly 80 mph (130 kph), according to the National Hurricane Center. It is expected to pass near Dominica and the French Caribbean islands of Guadeloupe and Martinique late Sunday or Monday.

Beryl is forecast to remain a hurricane as it passes south of Puerto Rico and not dissipate until it is located south of Haiti and the Dominican Republic.

Forecasters said the storm is expected to dump heavy rain across islands including Dominica and Puerto Rico, which could also be hit with winds of more than to 40 mph (64 kph) and flooding.

"People have to remain alert," Gabriel Lojero, a forecaster for the National Weather Service in San Juan, told The Associated Press. "The forecast could change for the better or worse."

Dominica was hit by Hurricane Maria last year as a Category 5 storm and hasn't fully recovered. Neither has Puerto Rico, where some 60,000 people still have a tarp as a roof and more than 1,000 customers remain without power more than nine months after the storm.

Many worry Beryl will cause power outages across Puerto Rico given the fragility of the U.S. territory's electrical grid after Maria destroyed up to 75 percent of its distribution lines. Lojero also warned that the storm is expected to dump up to four inches (10 centimeters) of rain and could unleash landslides.

"Maria caused a lot of changes in vegetation," Lojero said. "The island is vulnerable."

Officials said they will open 424 shelters across Puerto Rico as a preventive measure and urged people to monitor the storm's progress.

Beryl is the first hurricane of the 2018 Atlantic hurricane season. It was located 1,045 miles (1,685 kilometers) east-southeast of the Lesser Antilles on Friday morning and was moving west at 15 mph (24 kph).

The forecasters are calling it ‘Tiny Beryl ‘ because it is not a very big storm in terms of size. But this can cause it to move more rapidly and cause damage similar to that of a tornado where it makes landfall. And so yes it is good advice to monitor the storm closely.

I pray that it doesn’t mash up the leeward islands like last season. The Caribbean region can’t take another monster season.

The system was considered a total non-issue 2 days ago with no chance of serious development, and now it's suddenly a cat1 hurricane.

So much for storm predictions!!

SP, a prediction is only a guess, an assumption, an estimation, it's not a fact. These storms can change on a dime. SO, instead of criticizing, take heed and prepare.