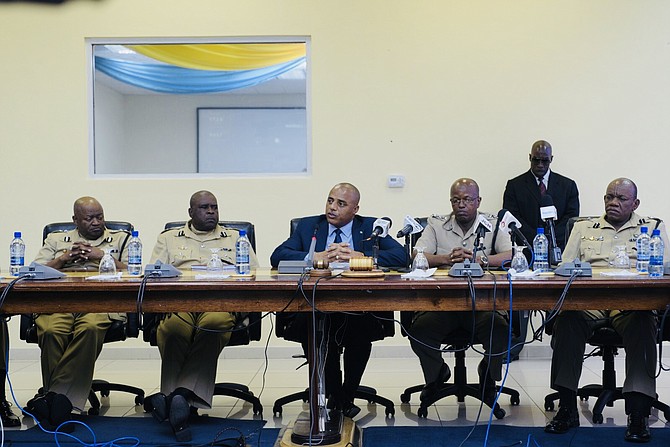 During a press conference at Police Headquarters, Mr Dames said the alert, now in a pilot phase, will act as the first step in a series of moves intended to stifle sex crimes across the country.

Mr Dames said the revamped version of the alert flowed directly from the original 2013 initiative, adding features which allows the alert to stand “in line” with the Minnis administration’s effort to fully enact Marco’s Law and establish a sex offender registry.

“As a government, we are committed to that cause,” he said.

Unlike the original alert which was almost exclusively tied to traditional forms of media, the new alert system operates via a web-based platform which allows for broad dissemination across any phone, pagers, emails, internet pop ups, fax, loud speakers, RSS feeds and secure encrypted messages through mobile applications and radio.

The alert will feature crime, weather and traffic updates and various community notifications.

The first, which was exhibited yesterday, operates along the lines of closed-circuit communication.

Via this version, specific units - police teams, neighbourhood watch groups or select communities - will receive all notices being disseminated related to any ongoing matter.

As a part of protocol two, notices will be disseminated across all platforms to everyone signed up for the alert.

Additionally, platform designers Multimedia Technology noted the system is equipped with a feature that will allow for any alert to be sent to all electronic devices nationwide, regardless of whether or not that device applied for the service.

According to the design team, the feature can only be used if authorised by the national security minister or commissioner of police.

During an initial test of the alert yesterday, officials guided several law enforcement officers, neighbourhood watch representatives and members of the press through the sign-up process.

Shortly after, a test alert was sent out and within seconds, a notice was received.

The test notice said police were seeking the public’s assistance in locating a 10-year-old boy, reported missing by his family.

The alert also provided a short description of the child and several pertinent details related to the abduction.

The contents of the alert varied by classification.

Critical details were sent primarily to the police in the room, while general information was sent to members of the press and neighbourhood watch personnel.

“We would have had any number of meetings leading up to today,” Mr Dames said.

“We are excited that we are at this juncture and this pilot for MARCO Alert is expected to take place over a period of some three months, so we will have a good opportunity, as well as members of the public, to see it in operation to test its effectiveness and usefulness so that once that is done, then we can begin to look at the next phase.

“This is all in line with our government’s efforts to make reality sometime this year the Marco’s Law and the sexual offenders registry.

“And so, the alert system, along with the sexual offenders registry, are those areas that are currently outstanding and we all can attest that there is an urgent need to make this a reality,” he added.

In late 2013, the government tabled two amendments, one to the Sexual Offences Act and the other to the Child Protection Act, which would create a sex offenders register, and a MARCO Alert for missing children, respectively.

The changes are the direct result of the death of 11-year-old Marco Archer who was murdered by convicted child killer Kofhe Goodman in 2011.

The Child Protection Amendment Act 2014 came into operation on August 26, 2015 and the regulations were introduced in the House of Assembly in February 2016.

The Christie administration rolled out its version of the MARCO Alert in July 2016.

At the time, then Minister of National Security the late Dr Bernard Nottage said under the alert, when a child is reported missing and authorities are satisfied that there is a risk of harm or death, the commissioner of police will be required to use the alert.

According to Dr Nottage, the commissioner would have caused the alert to be broadcast via commercial radio stations, television broadcasts, teletext communications, electronic network systems, the erection of billboards, or such other means as the minister responsible for national security would have deemed appropriate.

Despite the introduction, the alert was rarely used.

Upon coming to office, Mr Dames committed the Minnis administration to reviewing the alert and relaunching it.

When questioned on the remaining two components, Mr Dames yesterday said they were not too far off.

Think National Security Minister Marvin Dames should raise the level of educational requirements for persons joining the RBPF. Whatever they are, they are sadly inadequate. We hear a lot of talk about all things innovative but observe no visible signs of improvement in this vital service, which is lack-lustre at best and often manned/womanned by a bunch of rude incompetents.