'We Want To Grow Marijuana For Scientific Reasons' 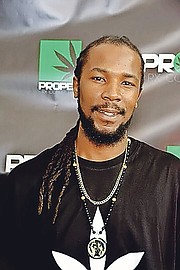 A Bahamian company yesterday announced it has completed an application under the Dangerous Drugs Act to cultivate marijuana for medical or scientific purposes.

Bahama Cann president Elliot Hepburn-Marshall told The Tribune the group intends to submit its application by the end of the week emboldened by the results of a Public Domain survey which gave massive support to the use of medical marijuana.

"We have two organisations," he said, "a non-profit organisation called Bahamas Cannabis Initiative and the Bahama Cann, a for-profit corporation that is really the engine behind the movement we started. We're hoping to empower Bahamians to invest in it."

Mr Marshall-Hepburn said: "We are applying for medical and scientific use, and I'm hoping to be able to manufacture it (in the Bahamas) and hopefully create a boom in the agricultural community."

Mr Marshall-Hepburn is CEO of Proper Rx Collective, a company based in Oakland, California, that delivers medical marijuana to patients. He was born in the US to Bahamian parents, and raised in Eight Mile Rock, Grand Bahama. He attended St Paul's Catholic School until the age of 14, when he moved to Miami to pursue his dream of playing basketball.

He told The Tribune in an earlier interview his desire to promote marijuana legalisation in the Bahamas was sparked after he received a heart-breaking phone call from the mother of an epileptic child.

Yesterday, Mr Marshall-Hepburn said he continues to get thousands of calls from sick Bahamians.

"There is a huge industry here. I'm sure we're a big cash cow for 'Big Pharma' (pharmaceutical companies). We're spending millions in South Florida. I get phone calls daily, from persons with AIDS, epilepsy, lupus, chronic pain, you name it. We are a very sick nation, the highest rates in the Caribbean for non-communicable diseases."

His group commissioned a Public Domain survey released this week, which found 59 percent of respondents knew someone suffering from a debilitating medical condition.

Seventy-one percent of 998 residents surveyed said they believed marijuana should be legalised for medicinal purposes, and all respondents ranked marijuana as the least harmful substance by comparison to tobacco, alcohol, and sugar, across the board.

Respondents were not asked about recreational marijuana or decriminalisation but just attitudes toward medicinal marijuana.

Yesterday, Mr Marshall-Hepburn said: "When I started, people told me I was crazy, that I was flying too close to the sun. Now those same people are on the radio talking and calling for it as we speak, it's amazing. I knew we would have high support because I have thousands of Bahamians that have contacted me. From 85-year-olds to people just walking out of doctors office diagnosed with stage three cancer.

"I know what's going on, I feel the people's pain. It's a great incentive for our economy and a whole bunch of entrepreneurs in many other areas.

"Even if they allow it to happen today, we're still a year away from being able to sell quality product because there is so much learning. Just New Providence alone will have to be mapped, and the technology it will bring to the Bahamas - it will take us into the 23rd century."

The government has said it will be guided by CARICOM's Regional Marijuana Commission (RMC) on the issue. The body was tasked in 2014 to fully ventilate the social, economic, health and legal issues surrounding marijuana use in the Caribbean.

The report is expected to be delivered today; however the report was leaked to the Gleaner in Jamaica and published on Monday.

It reportedly calls for the introduction of a strictly regulated framework for marijuana, akin to that for alcohol and tobacco.

The report said there was a unanimous view that the current classification for cannabis/marijuana as a dangerous drug with no value or narcotic should be changed to a classification of legal cannabis as a "controlled" substance.

Ma Comrades, both colours t-shirts governing administrations have done messed up badly with the "regularising" Numbers.Houses............ now they're preparing screw up Cannabis. No group politicians should be able license anything do with Cannabis - that is until there is Campaign Funding Legislation in place - legislation with teeth... too much temptations big monies corruption.

Legalize it for medical and recreational. Let’s make money off of this.

Tax, tax tax! Take that money pump it into health care. PMH needs upgrades and equipment. Healthcare for the poorest of Bhamaiana should be available, from cancer treatment to mental help and therapy. We should never have to leave the country for healthcare!

Can we please stop talking shyt, being politically correct, and face reality just this once? Screw growing it for "scientific reasons" the world passed that point decades ago. The Bahamas is deep in debt and needs to focus on growing and taxing it as a tourism incentive, local consumption and export abilities!

The horse is out of the gate and will never turn back. So instead of standing around peeking out like idiots with fingers stuck in our noses & ears, the Bahamas needs to make a serious effort to become the "new leaders" in revolutionizing the marijuana industry.

We agree on this one. I'm tired of people trying to play on public sentiment when they have an entirely separate hidden agenda. Then when they get in on the fake agenda, well you guys have to be forward thinking, we can't stop progress. Just look at illegal gaming and indecent carnival