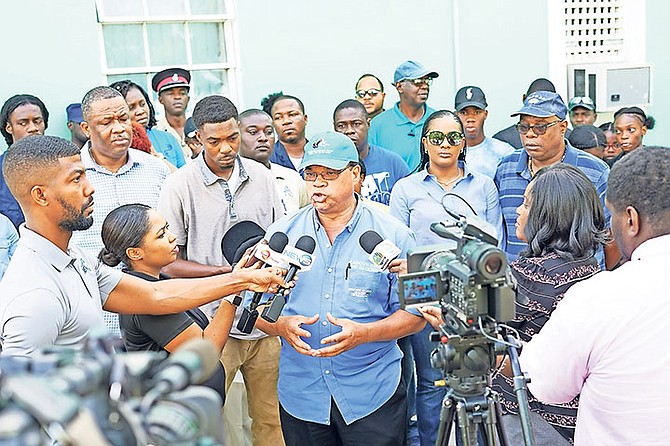 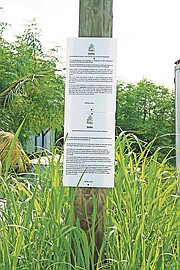 THE government has stepped-down its July 31 deadline for New Providence shanty town evictions to allow for the required 14-day leave period, according to Labour Minister Dion Foulkes.

Addressing the change in deadline, Mr Foulkes said the government wanted to protect itself from the possibility of the process being hindered by legal action.

"The first notice we had to give, which required a 14-day leave period," he said.

"The Attorney General gave us the advice on this, just in case it goes to court, we want to make sure that we cover all legal grounds and there is no possibility that what we are doing being stopped."

The Minnis administration is seeking to completely eradicate shanty town communities throughout the country, a process that will start in the capital and end July 31, 2019, with the complete demolition of the Mudd and Pigeon Peas communities in Marsh Harbour, Abaco.

Earlier this month, members of the shanty town action task force travelled to the 11 shanty town communities in New Providence, serving notices to residents which required them to provide the government with legal documents for the land they now occupy.

The government, at the time of the move, said the step was the first in a three-part process. Yesterday's notice action marked step two.

"The purpose of our exercise here this morning is to give the final notice to all the residents in all the shanty towns, that they have 28-days from today to move, " Mr Foulkes said just outside of the Carmichael Road Police Station around 9am yesterday.

"Notices will be given in person and notice will also be attached to every dwelling homes in the shanty towns.

"Two weeks ago we gave a notice that basically said if you have right to live in any of the residents that you are living in, go to the Ministry of Works, Control Building Division, and present you legal right to be there."

"All of that now is in obedience, " he added. "We have put a stop to that process and there will be no new building permits issued for any construction in any of the shanty towns in New Providence."

According to Mr Foulkes, all the properties being used, with the exception of one, is constituted as Crown land leased by the government to Bahamians for the purpose of farming.

Nonetheless, he added: "This will be the final notice. The deadline has changed. The deadline is now August the 10, it is no longer July 31."

This change comes as fifty families have joined together to launch legal action to block the government’s first round of shanty town evictions.

Shanty town residents - primarily from the Golden Isles and Bacardi Road area - are represented by human rights group Rights Bahamas (RB), which has canvased communities across New Providence in recent weeks and expects to file the legal action this week.

RB legal director and its former president Fred Smith said the number of families that have signed on to bring class action through a general constitutional motion is likely to swell.

Responding to the move yesterday, Mr Foulkes asserted that all residents of the Bahamas have the right to seek justice through the legal system.

However, he said he was confident the government was acting within the confines of the law.

Mr Foulkes said as it now stands, investigations are now underway to determine how these properties were sub-leased and rented out, despite them being operated as crown land presented for farming.

He added of the building permits issued to various residents: "Cabinet is going to have to make a decision with respect to that, but there were no occupancy certificates issued to anybody."

When asked if the government expects any additional resistance moving forward, Mr Foulkes said while he doesn't anticipate any push-back, the government remains prepared and resolute in its actions.

"We have the full co-operation of the Bahamian-Haitian leadership; both the United Haitian-Bahamian leadership and a group called OATH - Organisation to Assist and Teach Haitian - and also the Pastor's League.

"We also consulted Rights Bahamas, the Seventh-Day Adventist Church, the Catholic Church, the Methodist Church, the Anglican Church and the Christian Council, we've met with them twice. So we do not anticipate that there will be any holdouts in this," he added.

"...co-operation of the Bahamian-Haitian leadership; both the United Haitian-Bahamian leadership and a group called OATH - Organisation to Assist and Teach Haitian - and also the Pastor's League."

Just keep saying that over and over until you fall asleep and then wake up in the middle of the night in a cold sweat.

Ma Comrades, we've come having get use to delayed action by this Imperial red shirts cabinet always translates road map way duck out on dealing fully to completion with issues comforting the colony islands..... put in street talk - no governing Balls...... and, there is no denying how this red minister comes this Minnis administration with extensive previous ministerial history as the Prince Procrastination.

I couldn't have put it better, Comrade!

How can you tell when a Bahamian cabinet minister is lying? Watch his or her lips, are they moving?

Loftus Roker was right! these deadlines are ridiculous and meaningless.

Just have a dozen D10 tractors lined up to begin removing these eyesores on August 10.

What the hell!!!! If I get caught with half a joint, I don't even get 10 seconds to throw it away. I getting arrested. I mussy need to relinquish my Bahamian citizenship and apply to be a Haitian. Our MP's must be Haitians because that's the only people they are looking out for.

Actually they are. Can't you just feel the Haitian influence all up in the Cabinet? #justsayin'

"The Minnis administration is seeking to completely eradicate shanty town communities throughout the country, a process that will start in the capital and end July 31, 2019, with the complete demolition of the Mudd and Pigeon Peas communities in Marsh Harbour, Abaco."

Why a whole year in Abaco?

Cuz that's where the bulk of the voters are. Go figure.