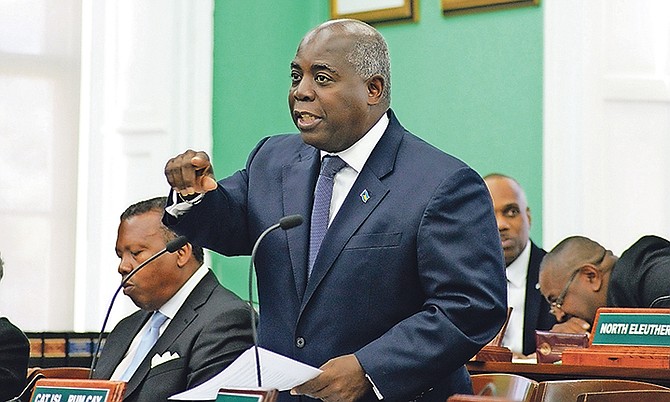 AS debate on legal marijuana use rages in the country, the Progressive Liberal Party is proposing the appointment of a review panel to make recommendations on the issue.

In a brief statement Monday, Opposition Leader Philip “Brave” Davis said his party sympathises with those who have been affected by the country’s anti-drug laws.

During the 39th meeting of CARICOM Heads of Government last week, a report calling for the end of prohibition of the plant was discussed.

Recently, a Public Domain poll said 71 per cent of 998 residents surveyed believed marijuana should be legalised for medicinal purposes, and all respondents ranked marijuana as the least harmful substance by comparison to tobacco, alcohol, and sugar, across the board.

“The PLP takes note of the recently released unanimous report on Marijuana in the CARICOM region of which we are a part that was presented at last week's Heads of Government meeting in Montego Bay,” Mr Davis said. “The PLP also takes note of the widespread public interest in this matter both for medicinal and recreational use. We propose forthwith to appoint our own review panel to make recommendations on this.

“We sympathise with those who have been disproportionately affected by the anti-drug laws, particularly our young people and those who are in need of medical marijuana to obtain relief.”

This comes as Prime Minister Dr Hubert Minnis on Saturday gave tacit support for the medical and scientific use of marijuana. However he told reports his personal views will not supersede a widespread public education campaign.

Dr Minnis said the government will establish a committee to host town meetings and focus groups on the issue. He said once the public’s stance is gleaned, the matter will be brought to Parliament for debate and “the people” will make a determination on the way forward.

The nation’s leader addressed reporters at the Lynden Pindling International Airport on his return from the CARICOM Heads of Government meeting.

He said he preferred the scientific name “cannabis” as the world was moving away from colloquial use of the term “marijuana”. Marijuana refers to the dried leaves, flowers, stems, and seeds from the Cannabis sativa or Cannabis indica plant.

In a brief statement Monday, Opposition Leader Philip “Brave” Davis said his party sympathises with those who have been affected by the country’s anti-drug laws.

Now I understand why the PLP was pushing so hard for drug law reform while in office; I couldn't understand at the time, but now it's very clear. Why on earth did we vote these guys out of power? They seem to have all the right answers.

because they were filled with corrupt sacks of shit that used office to profiteer and we got several downgrades in the process.

...if dese guys had the right answers dey woudda hav Review panels investigating many money losing agencies like how the Bank of the Bank of the Bahamas gave out all those bad loand causing hundreds of millions of taxpayers money to prop it up And woudda realise common sense dat all the officers giving out dese loans woudda been investigated and where found guilty jailed !!!!!!!!...then dey might had more than 4 seats...!!!!!! Happy independence.!

PLP wants Bahamian geniuses to waste time conducting review panels on the pros and cons of cannabis after best practices by "REAL" countries have concluded legalization is the best solution?

It's no wonder the PLP couldn't get anything sensible done!

Legalization might be the best solution for them, but sit back and watch the end results of this social experiment in 15- 20 years. There was a time when people thought it was a good idea to eat low fat foods as well, we now know that was not a bright idea! Having children out of wedlock seemed like a good idea too!

I often tell my children the one way to tell when something is most likely to be unwise is when the majority think its a good idea to do it! No one thinks of the unforeseen consequences! of their choices!

"Davis said his party sympathises with those who have been affected by the country’s anti-drug laws."

Really? And how much money does the PLP organization put on the commissary accounts of EVERY prisoner every month so they can buy toothpaste, soap, Telenol, and Vaseline?

My guess? ZERO. How much is put from the collective tithes collected every Sunday by "Christians"?

It is a shame that the government will miss this opportunity to empower the individual citizens. Instead of allowing each and every person to grow marijuana for his or her own use, grown to a quality desired by that individual, perhaps organically grown, pesticide free, herbicide free, instead the government will give contracts to select individuals who will monetarise the process for maximum profit and allow the government to regulate, control, and tax the process. So sad that this opportunity to empower the people will be missed due to government greed for taxes and need to control.

Soon the police can stop wasting time chasing after persons with a joint, and go after real criminals, robbers, rapist, gun runners, human smugglers etc.when cannabis becomes legal they will be pissed and lost, cause they now have to really work on crime and not on the joint smokers

The real criminals are those influencing politicians to make decisions for THEIR personal gain among them are the legalize marijuana crew! While people consider the financial benefits that could be had what about the social implications?

I have seen enough grass heads in my time to know this is not a good idea and will not end well!

Then wave your flag and go protest. The science shows you and those that think like you be wrong. You are entitled to your views, how ever prehistoric and retarded they may be.

ARE BAHAMIANS MATURE ENOUGH TO UNDERSTAND THE DIFFERENCE BETWEEN MEDICAL MARIJUANA AND SMOKING WEED ON THE BLOCK?????

Of course they did = this will take a hellalot longer and cost a hellalot more money..... das how dey roll......