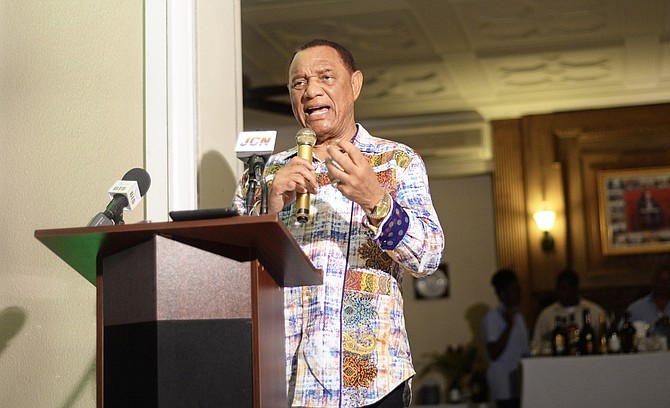 WHILE indicating support for the legal use of medical marijuana, former Prime Minister Perry Christie said the government must understand the implications of withholding the drug from those who really need it for various health challenges.

Mr Christie, who has an adult son with autism, expressed optimism that cannabis might become a viable legal solution to the issues the condition presents.

Asked if he would support any efforts by the Minnis administration to make marijuana available for medical use, the former Centreville MP said: “Clearly if in fact the research shows that it works for any kind of illness then there is absolutely no doubt that the people who are sick and who could be assisted by it deserve that kind of treatment. But without doubt I think everything we do has to be based (on research).”

“It’s something the region has been grappling with for a long time and we are faced with situations where states in America recognise the licence to grow marijuana so the Bahamas has to be very, very wise in looking at exactly what is taking place around the world.

His remarks follow Prime Minister Dr Hubert Minnis’ hinting support on Saturday for the medical and scientific use of the marijuana. However, Dr Minnis told the media at the time he did not want his personal views to supersede a widespread public education campaign.

Dr Minnis said the government will establish a committee to host town meetings and focus groups on the issue. He said once the public’s position is obtained, the matter will be brought to Parliament for debate and “the people” will make a determination on the way forward.

On Monday, Mr Christie said people with medical conditions that may be eased with marijuana are anxious for a solution.

“I saw where (Health Minister) Dr Sands indicated in the area of cancer research has indicated some degree of relief and most certainly there is commitment to usage,” the former prime minister said.

“So the fact of the matter is that to those of us who have family who are vulnerable because of illnesses they suffer from, all of us would want to have a solution to the challenges our family members face.

“In my particular case, I don’t know the extent to which they have been able to deal with autism but as you know I have a child who is autistic and we constantly look at the therapeutic interventions that have been made and research being made with a view to seeing whether there is something else that we could try that would give Adam a better chance.

“I am looking for any kind of relief or solution that can work for him and it’s something that we are watching very closely with full interest,” he said.

Yesterday, American news outlets reported that the Michigan Department of Licensing and Regulatory Affairs is adding 11 new conditions to the list of illnesses that can legally be treated by medical marijuana, including autism.

Other conditions qualified to be treated by medical marijuana in Michigan include Parkinson’s disease, Tourette’s syndrome, Arthritis, OCD, chronic pain, and colitis.

Former Governor General Sir Arthur Foulkes told The Nassau Guardian last week he thinks it’s a “no brainer” to legalise cannabis for medical use. He suggested he also supported eventual recreational use becoming legal, once proper controls and education are in place.

Former Minister of State for the Environment Phenton Neymour, in recovery from colon cancer, said medical marijuana, as well as conventional treatment, saved his life. He told this newspaper he frequently travelled to Florida for Marinol, a man-made form of cannabis, to restore his appetite, combat nausea and relieve pain.

Progressive Liberal Party Leader Philip “Brave” Davis has also announced his party would appoint a review panel to make recommendations on the issue.

Recently, a Public Domain poll said 71 percent of 998 residents surveyed believed marijuana should be legalised for medicinal purposes, and all respondents ranked marijuana as the least harmful substance by comparison to tobacco, alcohol, and sugar, across the board.

Perry, Brave and the rest of the PLP are full of crap. They were in power for 5 years, we never even had a conversation about the topic of marijuana under their governance and all of a sudden they back this move...

You are sooooooo right. Just because they see momentum from the FNM and the advocates they want to get on the band wagon

There are only two things I want to hear from Perry Christie, in this order:

1) that he is returning his PM pension to the treasury because he knows he does not deserve it and, 2) Complete silence for the remainder of his natural life!

This buffoon is simply egging on Minnis to do the wrong thing, knowing full well that legalizing any type of smokable use of marijuana will have grave consequences for our society. Those that may medically benefit from the chemicals produced by this plant can get those very same chemicals in non-smokable form, and Minnis as a doctor should know all about this.

This is all about the Jamaican government and Jamaican people (i.e. CARICOM) sucking hoards of cash out of the Bahamas in exchange for an illegal crop that grows in abundance at very low cost in Jamaica. And we thought we had things tough with all of the cash being sucked out of the Bahamas by illegal Haitian and illegal Jamaican immigrants sending cash back to their family members in their home better. Our most stupid dimwitted PM is about to allow the Bahamas to be made a fool of by both Christie and the Jamaican government and he doesn't have any idea whatsoever that he has become the laughing stock of the Caribbean region.

What consequences? All the people who would smoke marijuana if it was legal are the same people who already smoke it now. Literally nothing will change except they might be able to get some taxes out of it.

As usual. . .when you talk politics you get we lost. . .yoon making much sense here dude/dudette. For example. . ."legalizing any form of ganja. . .will have grave consequences for Bahamas". . .this Bahamas that everybody and they neighbors are now using recreational form of the weed. Those who are likely to "use" are using NOW. . .those who "een inta" smoking weed are NOW not smoking weed and are not likely to do so if it is legalized!!

exactly what kind of consequences are you referring to? less gang violence? less illegal smuggling culture? less young men in jail? I think maybe Mudda take might work for Commonwealth brewery and he worried his job will be lost when less people drink alcohol and smoke weed instead?

Looks like you are smoking a bad supply of weed and turpentine. You reckless obsession with Jamaicans is laughable. Your Pm is not the laughing stock of anything. Don't be fooled. The average person in the Caribbean doesn't get up and think about the Bahamas.. Please don't ask me what I am doing on here, as you do not own this website.

Who let this crook out of the ward. Get him back to the funny farm.

Lol. I have nothing to say. Enjoy your rest and maybe mentor a group of young people, scratch "young", a group of Bahamians in interpersonal relationship building, you're great at that.

all dem crazy tings he sed last time.... you know he was bunnin da good stuff!!

I'd rather hear Christie say this than Davis.

I am in agreeance with Mr. Christie.

What adulterated hypocrisy on display by the very same comrade politicians responsible jailing thousands for possession Cannabis.... leaving so many with lasting criminal records. Cry shame on yaselves for such F------ hypocrisies. Time play da appropriate music for such politicians and them preacherman's too.

Lmao... Christie was PM for 10 years and now he think its okay to legalize marijuana.

In other news, Perry Christie makes front page of the Tribune stating that the FNM must pass the Freedom of Information Bill and the Fiscal Responsibility Bill. Don't we get it by now??? These guys are playing a game called bait and switch. It's all a game to them!!! The FNM will likely never pass this legislation (hopefully, I'm wrong).

Opposing Parties always say the right thing when they're not in power!