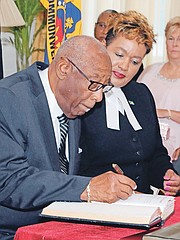 Cornelius A Smith was sworn in as deputy to the governor general at Government House yesterday by Acting Chief Justice of the Supreme Court Vera Watkins. Photo: Derek Smith/BIS

FORMER Cabinet minister Cornelius Alvin Smith, a veteran of past Ingraham administrations, was sworn in as deputy to the governor general yesterday.

Mr Smith is seen as the frontrunner to eventually succeed Dame Marguerite Pindling as governor general, though it is unclear when the succession will take place.

He entered front-line politics in the early seventies and was elected in the Marco City constituency four consecutive times.

Dame Marguerite was appointed governor general on July 8, 2014. Sources familiar with the matter believe she may remain in her post until June of next year at the latest.

Lady Pindling has been a consummate Governor General. There, has been none better. she is a beautiful, gracious Lady who conducted her self with deep respect. She

has served her Country well. and history will report her well. and none can take that from her. It is my hope that more Bahamian young women will use her as an example as to where a young girl from Andros walked to the mountain top.

Yes ......... hope you collect a bonus from her public salary stockpile

Sheep runner I do not know why but I like you.

An appointment that puts another suckling at the teat of the public treasury!

Right you are. Like Pindling, Ingraham and Christie before him, Minnis is quite content to use our hard earned tax dollars to keep old and wealthy political dinosaurs sucking forever from the public treasury. Minnis has made hundreds and hundreds of appointments like this since becoming PM in May 2017.