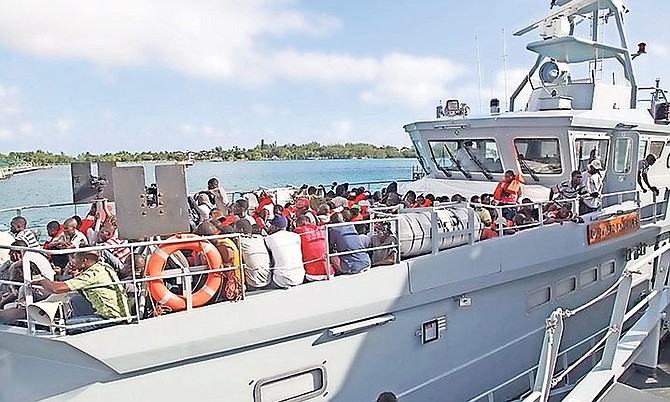 Detainees on board a RBDF vessel after two migrant sloops were intercepted. Photo: RBDF

THE Royal Bahamas Defence Force, in conjunction with international counterparts, apprehended two migrant sloops in separate operations early yesterday morning with more than 160 people on board.

The first sloop carrying Haitian migrants was intercepted about 5.30am on Sunday, approximately 40 miles east of Ragged Island. The second sloop was intercepted an hour later, south of Acklins Island.

According to the RBDF, the first apprehension was a joint maritime effort with Operations Bahamas Turks and Caicos (OPBAT).

A RBDF patrol craft and OPBAT helicopter had been on the lookout for the Haitian sloop since Friday.

The helicopter spotted the sloop on Saturday, approximately 67 miles west of Inagua, after receiving information provided by the RBDF Intelligence Section in collaboration with the Bahamas Immigration Department.

Around 5.30am on Sunday, HMBS Durward Knowles, under the command of Lieutenant Commander Omarv Saunders, intercepted the wooden vessel approximately 40 miles east of Ragged Island. There were 42 migrants on board.

The second operation was announced by RBDF officials in a subsequent press release. This mission was conducted in conjunction with the United States Coast Guard (USCG) District 7 and OPBAT.

An OPBAT helicopter also spotted the second sloop on Saturday.

Around 6.30am on Sunday, USCG Cutter Northland intercepted the sloop approximately 16 nautical miles south of Acklins, with 120 migrants on board.

"The successful interdiction was the result of the defence force Intelligence Section, in collaboration with the Bahamas Immigration Department, sharing certain information with OPBAT," the press release said.

The RBDF also said the USCG assistance was "timely", as HMBS Durward Knowles was "engaged with conducting a boarding routine aboard the first sloop east of Ragged Island."

Forty-six Haitian migrants were apprehended by RBDF patrol craft HMBS Madeira on July 3. The incident took place near South Eleuthera. Those migrants have since been charged in court in Nassau.

Things will get worse with the recent resignation of the Haitian PM. Why must the Bahamas pay for what Haiti does? Deporting and housing people costs us a lot of money we should be using to improve healthcare in the country!

Why don't we have a law that would allow anyone who enters this country illegally to have their bio-metrics taken and to never ever be able to apply for residency, works permits or citizenship should they successfully enter illegally at some other point in time, even if they marry a Bahamian?

A simple deterrent that costs us nothing!

WOW! Such numbers! Good job RBDF! Totally agree with the above posters on the immense costs to our country. The thing is, there are so many relatives already here sending the money out every week to finance these illegal entrants. Can something not be done to stem the flow of money out of our country into Haiti for this purpose? The money-senders are making a killing!

Sadly several of the RBDF's larger sea vessels are in need of significant repair work and cannot go to sea. This means many illegal immigrants are getting through to our shores. Even senior RBDF officers estimate they intercept and catch only 1 in 5 illegal immigrants that come our way by sea.