Miller-Uibo Surges Back To Win The 200m 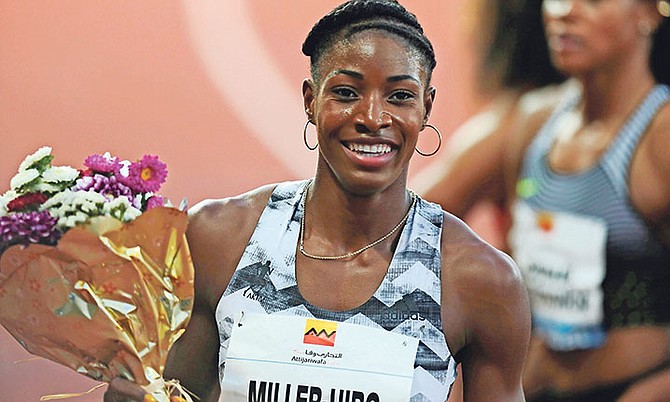 Shaunae Miller-Uibo, of the Bahamas, smiles after winning the 200m in the IAAF Diamond League meeting in Rabat, Morocco, on Friday. (AP Photo/Mosa’ab Elshamy)

SHAUNAE Miller-Uibo showed that she could rely on her six-foot, one-inch frame just as she does her speed.

After getting out to a sluggish start that left her in the middle of the pack coming off the curve, Miller-Uibo had enough real estate ahead of her as she reeled in English woman Dana Asher-Smith and American Jenna Prandini to propel herself to an impressive comeback victory in the women’s 200 metres at the Meeting International Mohammed VI de Rabit Diamond League meet on Friday with plenty room to spare.

The victory at the Prince Moulay Abdellah Stadium in Rabat, the capital of Morocco, was so impressive that Miller-Uibo’s time of 22.29 seconds out of lane six erased the meet record of 22.70 that was set by Jamaican Simone Facey in 2014.

Asher-Smith, who had taken command of the race off the curve, finished in 22.40 with Prandini clinching third place in 22.60.

“I am very happy about this victory, although I need to work on a few things, especially my start as it is not the best in the 200m,” said Miller-Uibo in a post race interview with the international press in the mixed zone. “I was here last year and I am glad to return because the atmosphere is amazing.”

Miler-Uibo said her 400m strength was what was able to pull her through after she admitted that her start wasn’t what she had anticipated. But against such a quality field of competitors, she was just thrilled that she was able to storm back for the win to remain undefeated this season.

The race also featured Murielle Ahoure, the IAAF World Championships’ 200m silver medallist in the Ivory Coast, who had to settle for fifth place in 22.70, the same time as American Gabrielle Thomas, the fourth place finisher.

Nigeria’s Blessing Okagbare-Ighoteguonor, who has the world leading time of 22.04, was seventh in 23.42.

Miller-Uibo, 24, was the lone Bahamian competing in the meet, the ninth on the IAAF Diamond League.

In the process, she collected eight more points to push her total to 16 points for third place after she got her second victory to go along with her triumph in her only other meet in the 200m on the Diamond League in Shanghai, China.

Marie-Josée Ta Lou, the IAAF World Championships’ double sprint medallist in the Ivory Coast, is out front with 19 points in three races with Jamaica’s Shericka Jackson getting 17 points for the second place in the same three meets that Ta Lou competed in.

And having just competed in one race in the 400m in Eugene, Oregon, Miller-Uibo is now sitting in seventh place in the one-lap race standings with eight points. Bahrain’s Salwa Eid Naser leads the field with 32 points, having won the 400m in four events on the Diamond League at Oslo, Stockholm, Paris and Switzerland.

The Bahamas has two other athletes in the running in their respective events. Steven Gardiner, who has posted a pair of victories in Doha, Qatar and Shanghai, China, is occupying second place in the men’s 400m and Abdalleleh Haroun of Qatar holds the lead with 27 points. Gardiner, 22, was the recent winner of the Bahamian Icon Award for Sports.

And Donald Thomas, 34, has already qualified for the final in the men’s high jump with a third place with 17 points in the four meets the event was hosted in Doha, Eugene, Oslo and Lausanne, Switzerland. He trails Qatar’s Olympic and world champion Mutaz Essa Barshim, who was unbeaten in three meets with 24 points and Danil Lysenko, one of the authorised neutral athletes, with 22 points.

Trevor Barry, who has appeared in one meet, is sitting in 13th spot in the men’s high jump with just three points.

Miller-Uibo and Gardiner, who both appeared in the final last year, will have to finish in the top seven to join Thomas in qualifying for another appearance in the final in Zurich and Brussels on August 30 and 31. Last year, Miller-Uibo won the 200/400 double, but Gardiner slipped coming out of his block and didn’t complete the men’s 400m.