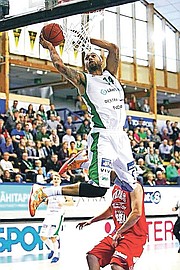 JARAUN Burrows will continue his career in the LNB French Pro A League for the upcoming season.

Burrows reached an agreement on a contract extension with his Fos-Sue-Mur Provence Basketball Byers.

The Byers concluded last season with an historic milestone. The team won the France LNB Pro B title with a 76-70 win over Roanne and was granted promotion to the LNB Pro A league for the first time in club history.

In his first full season with the club, Burrows averaged 13.9 points on 61.5 per cent shooting from the field and 5.1 rebounds in just over 25 minutes per game.

In the series-clinching game, Burrows scored 12 points on 4-6 shooting from the field to help his team complete a dominant undefeated 6-0 postseason run.

FOS-Provence ended the season with six consecutive wins and headed into the playoffs as one of the league's hottest teams.

They finished the season ranked No.4 with a 24-10 record. They continued that momentum in the playoffs unbeaten.

Burrows first signed with the Byers in April 2016 for a late-season stint and playoff run. In 12 games, he averaged 10.7 points, four rebounds and three assists in just over 25 minutes per game and the team reached the Pro B semi-finals.

He agreed to return to the team for the 2017 season, his first full campaign with the club.

Prior to his French debut, he spent the bulk of the 2016-17 season, for Hapoel Haifa in Israel's Liga Leumit - the second tier level league in the country.

Burrows appeared in a total of 26 games for them and averaged 21.7 points and 9.8 rebounds per contest.