Face To Face: Building A Legacy In Eleuthera

I was recently in Eleuthera connecting with my Ingraham side of the family and learning about our heritage in Palmetto Point when I met a talented woman with a friendly disposition and was immediately drawn to her. She became the next focus of Face to Face because after getting to know her a bit better, I found that she had a wealth of knowledge, experience, love of country and a life story worth sharing. 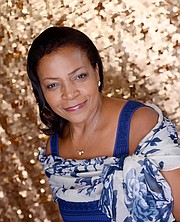 Many Bahamians born and bred on the Family Islands migrate to New Providence, mainly for work. For this reason, many of my interviewees here tell stories of growing up in the out islands and living the kind of life that really seems to make for people with good character and a sense of humility.

But for Theresa Elizabeth McCardy-Burrows, Eleuthera is the land of her birth, her upbringing, and the land where she chose to get married and raise her family. Her children, now all adults, are also investing in the island making a livelihood for themselves, proving it is indeed possible to build a successful legacy on the out islands.

Theresa hails from the settlement of Hatchet Bay where her mother, Veronica McCardy (nee Johnson) was born. Hatchet Bay was the home of the once popular farm, Harrisville Company. Harrisville was well-known for its chicken, eggs, milk and ice cream and provided its supplies for export throughout the country.

Theresa’s father, Cecil McCardy, a Long Island native, was gainfully employed in Nassau and was nearing 30 years old when he got a call from his sister in Hatchet Bay. She must have wanted to see her brother settle down and have a family, because she told him about this beautiful, well-mannered young lady who would make “a really nice wife” for him. She was working at Harrisville and the settlement, being a small one, was one where everyone knew each other. Veronica’s mother was a baker of bread and cakes and she would help her mother with sales; in this way, she got to interact with many others in the settlement.

Cecil made his way to Hatchet Bay on the “Passing Jack” mailboat to visit his sister and see the lovely Veronica for himself. Theresa said from all accounts, it was love at first sight. Cecil visited the island two more times before asking Veronica’s mother for her hand in marriage. On April 16, 1944, the two were married when Veronica was just a couple months shy of being 18 years old. That union brought 13 children, including twins who became very popular in Bahamian culture. Danny and Buddy (the latter now deceased) started a daiquiri stand in Nassau that grew into the popular restaurant still in existence – Twin Brothers – with several locations in Nassau. Theresa was the fifth child of this union, born on July 30, 1953. 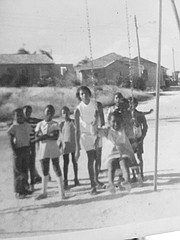 “Growing up in Hatchet Bay was great,” Theresa said.

“Because of Harrisville, there was a great economic boom. My dad worked as head foreman for all of their buildings. We lived well in the community with all our neighbours and all the children went to the Alice Town All Age School, which later became the PA Gibson All Age School. When school was closed, we used to get up at 5am to go graping (collecting sea grapes). We would walk to Hampton land by the silos, wait for daylight and collect buckets of grapes and bring them back. My mother was very protective of us and didn’t allow us out of her sight too much… but we were allowed to go in certain areas nearby… until we got older. We would go swimming by the seaside… but I was always studious. I was always wanting to do my schoolwork and I was determined to come first and don’t let anyone beat me in class.”

This studiousness caught the attention of PA Gibson, who was principal of Alice Town school at the time. He recommended Theresa for the post of school monitor, which allowed students to go straight from behind the desk to the front of the class teaching. She was 16 years old at the time.

Nearly two years later, Theresa met the man who would become her lifelong partner. She was at a wedding in Palmetto Point with her cousin when 18 year old Andrew Burrows pulled up on his motorcycle and noticed the Hatchet Bay beauty. He lived in Governor’s Harbour and had a job, so he was able to purchase his own set of wheels and ride from settlement to settlement. His father collected insurance policy from Theresa’s mother, so he knew just where to find her. A few days later, he came rolling over to her house to say hello. She spoke with him for a while, then her mother came out and chatted with him. That was the first of many visits to her parents’ home. When Theresa was just a few months shy of 18, she married Andrew and a love began that lasts today. 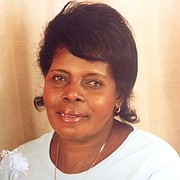 Andrew’s mother encouraged him to save his money and build a house, so he was able to take his young bride to live with him in Governor’s Harbour. Theresa continued to teach in Eleuthera but at one point, Andrew was offered a job at Barclays Bank and they relocated to New Providence. Theresa then had the opportunity to teach students at schools like Shirlea Primary and HO Nash. But five years later, they were back on the island where they truly belonged. Theresa taught at Governor’s Harbour High School later changed to Central Eleuthera High and she also taught at Windermere for a time.

About teaching, she shared: “I was a language arts teacher and my passion in teaching was to help the challenged students understand the basic principles of language arts. I realised early on that many of our students enter high school with a poor concept of even the basics of sentence construction and paragraph writing.” 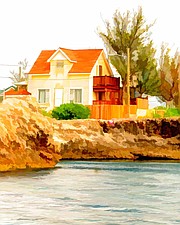 A painting of Theresa's villa and cafe.

Due to the fact that a part of her career was spent in guidance counselling, she spent the last two years of her career heading the Adolescent Health Centre in Eleuthera before retiring at age 50. Still young and fit, Theresa had the opportunity to pursue her passion – photography.

When she was 13 years old, she saw a camera in the back of a magazine and asked her mother to buy it. When the camera arrived, it ignited a passion that continues in Theresa to this day.

“I started out taking pictures of everything – the neighbours, the trees, the cats – everything,” she recalled.

“We would send the negatives in the post and it would take two weeks to come back. My most exciting day would be when my prints arrived. I was mesmerised that you could stop a moment in time. Someone kissing, kids playing, you take a photo and bam! It’s forever remembered. I still have that excitement to this day. But when I started out, sometimes I would have photos of people with the heads chopped off, photographed at the waist. 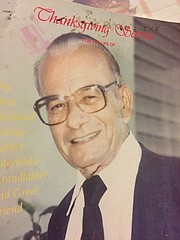 “But I got better and better. Then one of my colleagues at Central Eleuthera High, Malcolm Spicer, a teacher from the UK gave me some tips. I started out taking passport photos for people in the community. I read and studied a lot about photography. I started taking wedding pictures. Many people on Eleuthera who got married had their wedding photos taken by me. I have photos of people’s grandparents, parents, their children and grandchildren.”

Forty-seven years after getting married, the Burrows now have four adult daughters. Their daughter Elizabeth is trained in marketing and finance and is the editor of the Eleutheran newspaper and magazine; Calae is a trained cosmetologist and the owner of Octis – a local brand producing organic spices, teas, bath products and more; Candace is a trained psychologist who was once a school counsellor but now manufactures beauty and health products and operates a photo studio; and Gem is a trained accountant who opened a coffee shop with her husband on Harbour Island called Cocoa Coffee House.

Theresa now has a lovely villa and a cottage for rent on the island, and she also has a café and gift shop. She buys plaited straw from local vendors and makes unique bags that are on sale in the gift shop.

Theresa shared these words of wisdom: “Putting God first in everything you do is number one. I remember as a young person, getting on my knees and asking God for wisdom. It is important to be grateful and thankful everyday. There will always be someone with more than you, so be grateful for your blessings and more will flow in abundance. It is very important in life to help others. I read a quote the other day that says, ‘The most selfish thing you can do is to help others.’ The great feeling you get is your own reward. In order to achieve your goals, you have to work at it everyday. Successful people work hard! Don’t just aspire to make a living, aspire to make a difference!”

I always find stories about Eleuthera interesting but in print I think the wrong pictures are attached to the story which was confusing this morning. Get it together guys!