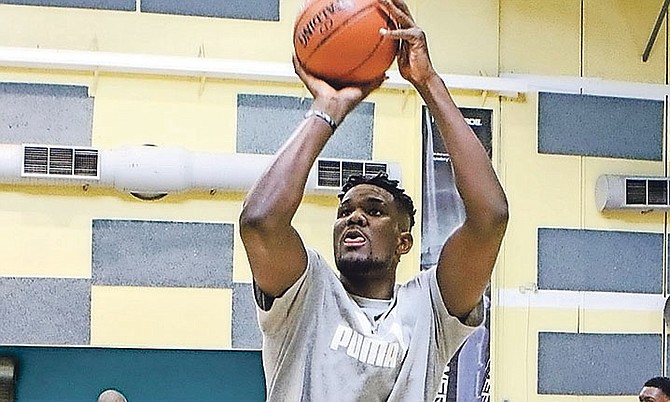 DEANDRE Ayton returned to the place where his basketball dreams first began.

Ayton made an appearance at the 31st Jeff Rodgers Basketball camp yesterday to interact with scores of enthusiastic campers eager to greet the No.1 overall pick in June's NBA Draft.

One day after the Thompson family and Leevan Sands visited the camp, Ayton told the campers of his basketball journey.

"I remember being here, I knew nothing about the game then, but I was inspired by guys like Klay Thompson who came to the camp when I sat where you are now," Ayton said.

"I had no idea where basketball would take me, but I listened to everyone who was willing to teach me and I was dedicated to the craft. This camp gave me the first opportunity and I'm grateful for that. I just want you guys to be inspired as well and take advantage of every opportunity in front of you."

Ayton was discovered locally at the Jeff Rodgers camp in 2011 before he headed to Balboa City School in San Diego, California. He eventually transferred to Hillcrest Academy in Phoenix, Arizona.

"At the Jeff Rodgers Camp I didn't think I fell in love with the game right there. My mom just wanted me out of the house during the summer. That's when I really got exposed, that's when the opportunities started, but it's just great. When I came to the United States, I knew what hard work was," Ayton said on draft night.

Ayton used his platform on draft night to talk about the improvements he hopes to make in opportunities for other young Bahamian basketball players and displayed the lining of his jacket which paid homage to his multicultural heritage.

When the Phoenix Suns selected Ayton with the first overall pick in the 2018 NBA Draft, it represented an historic moment for Ayton, the franchise and The Bahamas.

With Ayton's selection, The Bahamas joined the United States, Canada, Nigeria and Australia as the only countries with multiple No 1 overall NBA Draft picks. It also represented the first No 1 pick made by the Suns in franchise history and the first No 1 pick from the University of Arizona.

He was the ninth consecutive college freshman to be selected with the first overall pick. During his lone season at Arizona, Ayton led the NCAA with 24 double doubles - a PAC-12 freshman record. He averaged 20.1 points and 11.6 rebounds per game while shooting 61.6 per cent from the field, and was the "Karl Malone Power Forward" of the year consensus First Team All-American.