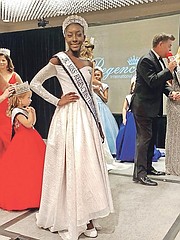 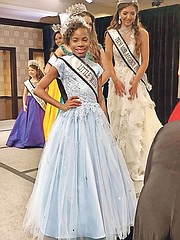 Congrats are in order for Bahamian beauties Kassiti Capron and Tysha Johnson who both won Miss Regency International crowns in Las Vegas.

The girls are the first ever Caribbean delegates to not only win one but two titles at the same pageant in their particular divisions as Little and Junior Miss Regency International respectively.

A fifth grade Kingsway Academy student, Tysha is no stranger to the stage, having performed as a member of the National Youth Choir. She also a members o the Brownies and the Discovery Club. She is also involved in number of charitable efforts which include the Beach Clean-Up campaigns, the Hands For Hunger food drive. And with the help of her parents she started a healthy breakfast campaign where she donates nutritious breakfast foods to students throughout New Providence.

These initiatives are what allowed her to capture the top award for community service at the Miss Regency International Pageant in Las Vegas. Tysha is also very active at her school, serving as their basketball captain, as a moderator and engaging in a number of extra circular activities, all while maintaining a 4.0 GPA. She recently won the Ministry of Culture's Junkanoo Essay Competition for the Primary Division.

"After winning she said she is excited to go on a cruise which is now a part of her prize package. She feels great to have represented the Bahamas well," said Tyrhonda Knowles-Glinton, Little Miss Regency Bahamas pageant director.

Kassiti Capron is a seventh grade student of St John's College who currently maintains a 3.0 GPA. She is also a member of the school's track and swim team. Like Tysha, Kassiti is also involved in a number of charitable efforts such as Hands For Hunger and volunteers for a reading programme at the Nazareth Centre and the Children's Emergency Hostel.

"She believes that everyone should enjoy a good book and is passionate about positive body image. She wants to encourage children her age to love themselves and to embrace their outer appearance. Her passion and zest for giving back and encouraging others also allowed her to secure to top prize in every award category at the pageant," said Mrs Knowles-Glinton.

"During her post-win interview, Kassiti said she was happy to have met so many people from different countries and felt extremely proud that she got to represent the Bahamas on the international stage."