Students Are Honoured For A Successful Year 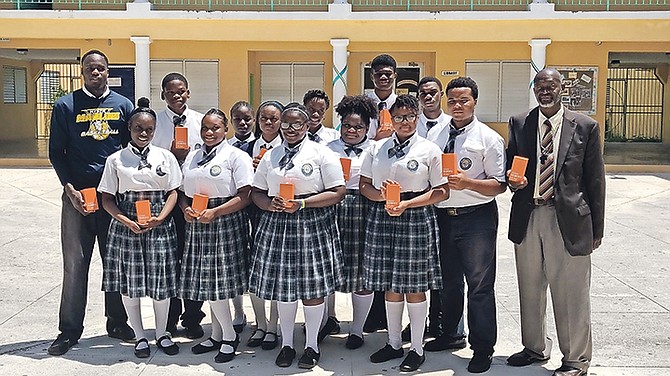 AS the school year comes to a close, 13 students from Doris Johnson Senior High School were rewarded for their achievements.

Last year, BTC pledged its support to the Student of the Month programme where it recognised the outstanding achievements of students. The programme recognises students at various academic levels that have demonstrated a commitment to academic growth and social development. Monthly, one student from the tenth, eleventh, and twelfth grade level is selected as the BTC Student of the Month. Each deserving student receives a $100 cash prize along with a mobile device from BTC.

Principal James Clarke said this programme has had a positive effect on the school since its inception in September 2017. Principal Clarke said, "So far we have seen where collectively our students have improved their GPA straight across the board from grades ten through grade twelve."

Being a star student is not easy, but these students pushed passed the odds and today are celebrated. For some of the students, this reward from BTC affords them their first mobile device. Tenth grader Kadeisha Adderley said she struggled with her GPA due to distraction from peers.

Public Relations Manager Indira Collie said, "BTC became involved with the Doris Johnson Student of the Month programme over a year ago. The aim of the programme was to encourage academic growth at all levels, and seeks to reward those who are conscientiously making an effort to improve. We are proud to celebrate with all of the students. This effort again demonstrates the positive effects of partnering with the community."