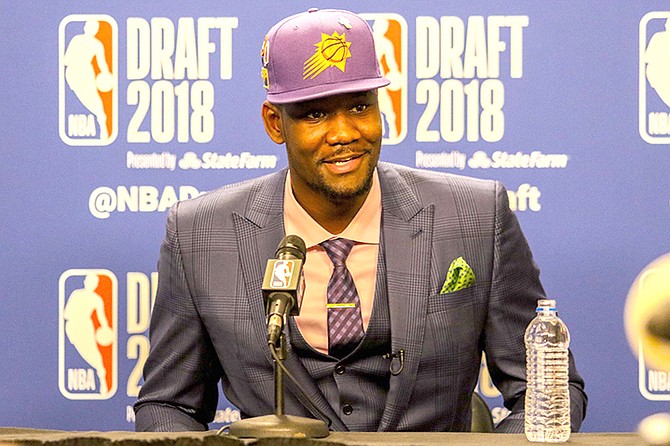 BROOKLYN, New York - When the Phoenix Suns selected Deandre Ayton with the first overall pick in the 2018 NBA Draft, it represented a historic moment for Ayton, the franchise and The Bahamas.

With Ayton’s selection, The Bahamas now joins the United States, Canada, Nigeria and Australia as the only countries with multiple No 1 overall NBA draft picks.

“This is a great blessing. I worked hard for this. I had a lot of confidence because I knew I deserved this. There was stuff I went through to get to this point, and I’m just happy to be here and happy to be with the Phoenix Suns,” Ayton said.

“Having my name called to be the first pick for the Phoenix Suns was mind-blowing. Having all that confidence and leading up to that point when I saw Adam Silver came out, I was just waiting for my name, and when he called it, my mind went blank. I just did the routine everyone else was supposed to do, and I just got up there and enjoyed the moment, and I saw the reaction on my mom’s face. It was just priceless.”

He is the ninth consecutive college freshman to be selected with the first overall pick.

Ayton previously mentioned the prospects of teaming with Booker to create one of the league’s most dynamic tandems.

“Basketball is really changing, so the two-man game is really hard to stop. Having a guard like Devin Booker, who can really score the ball, and me being a big man who can really pick-and-pop, very versatile, that’s very dangerous,” he said, “The team, in general, is a very young and hungry team. We just have to stick together, get a great chemistry and start a winning legacy in Phoenix.”

Coming out of Hillcrest Academy in Phoenix, Arizona, Ayton was the No 1 overall prospect in America. He was selected to the USA Today All-USA Boys Basketball Team and was also a McDonalds and Jordan Brand All-American.

At the national team level, he was a member of the senior men’s Centrobasket squad and led the team in both points and rebounds as a high school junior.

Ayton was discovered locally at the Jeff Rodgers Summer Basketball Camp before he headed to Balboa City School in San Diego, California. He eventually transferred to Hillcrest Academy.

“At the Jeff Rodgers Camp I didn’t think I fell in love with the game right there. My mom just wanted me out of the house during the summer. That’s when I really got exposed, that’s when the opportunities started, but it’s just great. When I came to the United States, I knew what hard work was,” Ayton said, “The hard work really starts now. I told my mom, you think we were working, but the hard work really starts now. We’ve got a lot of work to do, and after the summer we’ll probably catch a breath.”

Ayton used his platform on draft night to talk about the improvements he hopes to make in opportunities for other young Bahamian basketball players and displayed the lining of his jacket which paid homage to his multicultural heritage.

“My dad is from Nigeria, my mom is Jamaican and Bahamian, so I’m helping all those countries in one. I’m not just a Bahamian. I’m Nigerian and Jamaican. So I just want to let the world know that.”