A Supporter To Be Sure Of 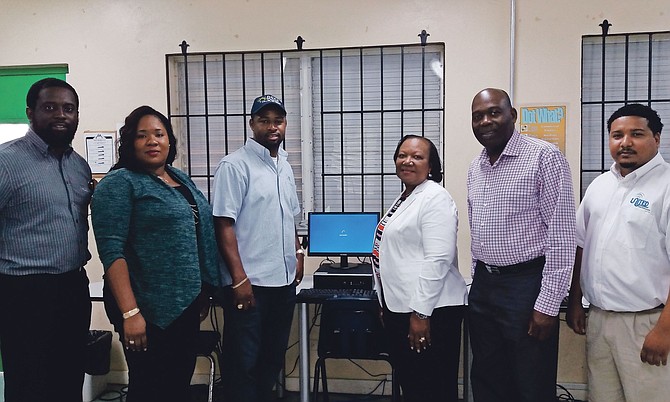 FOR some time, dozens of at-risk students at Programme SURE, an intervention institution for disruptive teen boys, have pecked away on outdated computers which took forever to boot and were likely to crash mid-way into a lesson.

With Bahamas Striping Group of Company's (BSGC) donation of five, brand new HP desktops to the school on Monday, Principal Angela Hunt is more than half way to her goal of upgrading the school's computer lab, according to a press release.

"The latest donation brings the total number of new devices to nine," said Ms Hunt, who took office last August and almost immediately commenced an appeal to corporate citizens to assist the school in updating students' technological resources which were more than 10 years old.

"I made it my mission to try to refurbish the entire lab. I wasn't that successful, until recently," she said. "Now, we need only six more devices to complete the lab's total refurbishment."

With no idea as to where the new computers will come from, Ms Hunt still holds out hope for more donations before the start of the new school year.

Student enrolment hovers around 37, ranging in ages from 13 to 17. Teens are referred to the Gladstone Road Agricultural Complex either by their schools or the courts. Without Programme SURE these students would likely be on the streets, said Ms Hunt, even though some have not committed any crimes.

"Sometimes it's just minor infractions," she said. "They have anger management issues or they could be caught with a weapon, which automatically sends you to Programme SURE."

"Whenever we get the opportunity to hire someone who wouldn't ordinarily get a second chance that's what we do," she noted during the brief hand-over event on Monday.

Pointing to the company's training and hiring practices, Ms Sturrup said the group of companies has a history of partnering with at-risk young men whether it's in New Providence, the Family Islands or Turks and Caicos, on a per project basis. "That's a part of our company's culture," she said.

Bahamas Striping's President Atario Mitchell knows what it's like to lose focus during crucial teen years.

"As a high school student I took life as a joke. It wasn't until I enrolled at the Bahamas Technical and Vocational Institute that I got serious," he said.

"It was there I realised the importance of education. I did better in two years at BTVI than I did during the whole six years at high school. I really focused on my work and graduated at the top of my class so I understand the idea of a second chance."

The whole idea behind this particular donation of computers is to not have young men at a technological disadvantage, said Dominic Sturrup, BSCGC's senior vice president of business development.

"Although we live in a technologically driven world not all students have access to a desktop computer with Microsoft Office applications at home so they need to have it here," he said. "We wanted to do our part to ensure that happened."

"We at Programme SURE really appreciate the effort Bahamas Striping made and the fact they reached out to us," said Ms Hunt. "This makes life so much better for the computer teacher and the students. Students no longer have to fight over the four new ones."

Computer class sizes range from seven to 10 students, said instructor Dion Johnson, although the lab is built to accommodate 15.

"As a teacher I work with what I have. The students will never see there's a problem within the lesson because I adapted to our computer situation, but now our students have a better opportunity to cover more ground within a lesson and can complete their work more efficiently," he said.

"I'm proud to see this all Bahamian company giving back to our youths. It lets our students know people on the outside do care about their education and their success. That goes a long way. When you sow a seed, you're able to reap the fruit."

What happened to the STAR Academy???????