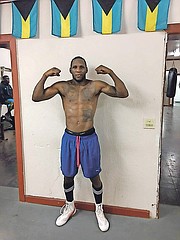 EVEN without the financial support of the Bahamas Amateur Boxing Federation, well travelled welterweight boxer Carl Hield has his bags packed for the trip to the Central American and Caribbean Games qualifying tournament next week in Tijuana, Mexico.

Hield, who is training in Havana, Cuba, said with the subvention from the Bahamas Government and a sponsorship from his sister, Carla Bethel, he will be leaving on Wednesday to compete in the tournament March 9-18 when he will be the lone representative from the Bahamas.

He will contest the 69-kilogram or 147-pound welterweight category where he will attempt to qualify for his third CAC Games, having participated in 2014 in Veracruz, Mexico and in Mayaguez, Puerto Rico in 2010 before he heads to his fifth Commonwealth Games where he won his first medal with a bronze in Delhi, India, in 2010.

Hield is coming off a quarter-final appearance in the last games in Glasgow, Scotland, in 2014. He made his first appearance in 2002 in Manchester, England at the age of 16 and also participated in Melbourne, Australia in 2006.

Hield, 31, thanked God for allowing him to continue to represent the country.

"One of the coaches from the Cuban national team said they will work with me because I will need to have someone in my corner when I go into the ring," Hield told The Tribune.

"I would like to have someone from the Bahamas to go with me, but the federation say they don't have any money for it."

"I think it's important for me to go to this tournament because it's a big tournament and all of the top boxers from the various countries training here in Cuba will be there. They are all trying to qualify for the CAC Games and to get ready for the Commonwealth Games."

The Commonwealth Games is scheduled for April 4-15 in the Gold Coast, Australia and Hield, along with Rashield Williams, who will contest the 65-kg or super lightweight category, are scheduled to carry the Bahamian flag. The federation, however, has not confirmed who will be participating or named the management team who will accompany the boxers.

The CAC Games is scheduled to take place July 19 to August 3 in Barranquilla, Colombia.

"I want to become the first Bahamian boxer to win a medal at the Commonwealth Games and the CAC Games," Hield said.

"I have already won a medal at the Commonwealth Games, so I want to win another one and my first one at the CAC Games.

"I will be in Mexico two days before the competition to get ready. I think I will need to finish in the top six or the top 12 to qualify for the CAC Games. I'm not sure. I just know the competition starts on March 9. I just have to go there and be ready to compete."

Through the assistance of the Ministry of Youth, Sports and Culture and the Bahamas Olympic Committee, Hield gets to train in Cuba and he indicated that things have been going very well in preparation for the tournaments this year.

"I have been training with guys from Ireland, the Dominican Republic, France and even Cuba in my training camp in Havana," Hield pointed out.

"We have been preparing either to compete in the CAC Qualifier or the Commonwealth Games, so we are helping each other out.

Hield said he's under a new coach in Cuba, but the competition has been intense from the boxers he faced in the camp at the International Sports School.

He said the sparring at least three times a day has enabled him to maintain his weight and he's eager to get into the tournament next week and the Commonwealth Games next month.