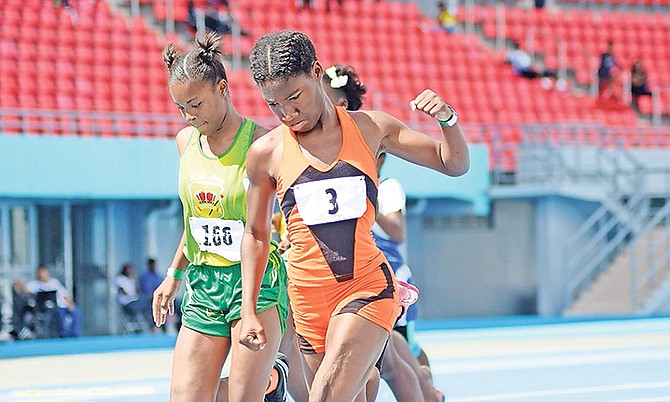 AFTER several years of second place finishes, the AF Adderley Tigers finally moved ahead of the field and unseated their chief rivals as GSSSA track and field champions.

The Tigers concluded the two-day meet with 448.50 points, a slim 30.5 margin over the CH Reeves Raptors, who ended up with 418 points.

The SC McPherson Sharks finished third with 372.50 points, the HO Nash Lions were fourth with 297 points and the DW Davis Royals rounded out the top five with 223 points.

The TA Thompson Scorpions were sixth with 186 points, LW Young Golden Eagles were seventh with 137 points and the Anatol Rodgers Timberwolves were eighth with 41 points.

In the 200m, Sherinique Sears continued to be the star of the meet with her fourth individual gold medal. Sears won the Girls U-14 half lap in 27.06.

Her time finished well ahead of the U-16 winner, Victoria Kemp of CH Reeves,who won in 28.49.

Tonnice Stubbs of CH Reeves took first place in the Girls U-16 high jump with her mark of 4.49m, followed by Miracle Newton of AF Adderley (4.08m) and Leoshana Johnson of SC McPherson (4.01m). In the throws, Ricardo Pierrelus of DW Davis won the U-14 Boys Shot Put with a throw of 11.22m. Ivan Strachan of CH Reeves was second at 10.46m and Cadet won his second medal in the field on the day at 9.76m.

In the U-16 Boys event, George Colebrook and Fabian Storr of DW Davis took first and second place respectively with throws of 11.87m and 11.06m respectively.

William Larrimore of LW Young was second at 10.07m.

The Raptors saw their winning streak of four consecutive meets come to an end at the hand of the Tigers.

The last school to win other than the two powerhouses was the LW Young Golden Eagles in 2012.