Insight: Why ‘Get Papers Or Get Out’ Is Pure Political Nonsense 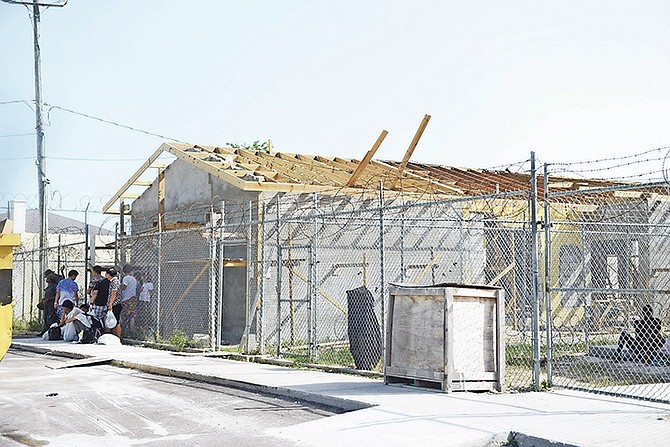 The policy of ordering irregular migrants to either “get papers or get out” is a glaring example of utter political nonsense. There can be no other term for it. This harebrained dictat is not only illegal; it is also completely irrational, totally hypocritical and fundamentally flawed in just about every way.

No doubt, Prime Minister Hubert Minnis and Immigration Minister Brent Symonette are aware of this. The policy clearly has no practical use in achieving their own stated aims and should be viewed as nothing more than a cheap public relations stunt to take advantage of the discriminatory undercurrents in this society.

First of all, the policy itself is fundamentally inconsistent; even self-contradictory. The Prime Minister, in urging irregular migrants to secure status, said: “there are too many individuals who are here illegally and taking jobs of Bahamians. They must be dealt with. I’m not saying you can’t stay, but there is a law and we are a society of laws – respect our laws, that’s all I ask.”

So, the objective is to protect Bahamian jobs, but at the same time a person can remain here, so long as they somehow manage to get “status”?

According to the nation’s leader then, people who have violated the Immigration Act can take Bahamians jobs after all, provided they manage to obtain the appropriate papers – although how they are supposed to do this by any legal means remains a mystery.

As it stands, the Immigration Department will not even consider an application for status from a person who has arrived here illegally or who has overstayed, unless they are out of the country. Telling people “You can remain if you get status” – when under the circumstances, status is impossible to get – is the very height and definition of deception and hypocrisy, and they know it.

Yet the smugness with which the FNM apply this baldfaced double standard was aptly highlighted by Minister Symonette’s puerile, small-minded taunt to migrants: “Don’t blame us” if you are deported – you were told what to do.

Secondly, though the stated target of this policy is people who are “here illegally”, in practice the victims have overwhelmingly been people born in The Bahamas to foreign parents. PM Minnis, Symonette and Immigration, continue to abusively and tragically conflate migrants, whether illegal or legal, with the thousands of persons born in The Bahamas who are in fact Bahamian Citizens in Waiting.

These individuals have not entered without permission or violated the Immigration Act in any other way. They are totally innocent of any wrongdoing whatsoever, yet they become the convenient scapegoats in this underhanded political game. Instead of being born in a country that recognises their constitutional birthright citizenship, they are born with the Original Sin of their parents perhaps having entered illegally decades ago.

This gives rise to several ironies. The first is there is no law which requires any person born in The Bahamas to “Get Papers”, or “Get Straight”, or “Get Regularised” and finally “e-Documented”.

The second is that to the extent those born here do apply, it is the government itself that has failed to efficiently process thousands of status applications of people born here, and has not seen fit to educate such individuals about the application process, or their rights and entitlements under the law.

“Get papers or get out,” suggests people have a choice. In reality, it is a case of the government manufacturing its own category of helpless victims, then persecuting them for political gain.

Thirdly, even if we take Minnis and Symonette at their own word, the result is a scenario in which people who violated the law can stay and have jobs, but people with a legitimate birthright who have followed the proper procedures but have been ignored by government are to be targeted, deprived of their liberty and expelled.

A policy aimed at protecting Bahamian jobs that ends up privileging foreign lawbreakers over Bahamian-born followers of the law.

What could be more perverse than that?

A further contradiction is that even while urging people to “regularise themselves” and get their papers in order, the Immigration Department continues to target foreigners who have actually abided by the dictates of this absurd policy.

As numerous court filings and news reports attest, in the last few months alone, several individuals able to prove they are married to a Bahamian and who had submitted applications for a spousal permit were nevertheless arrested, detained and held for extended periods of time under threat of imminent deportation.

They, just like the many thousands of Bahamian-born individuals still in limbo, might be waiting months or even years for a reply from the very same Department that then turns around and deprives them of their liberty. They obeyed the Prime Minister, applied to “get papers”, but they still have to “get out”.

But perhaps the supreme irony is where the Prime Minister says: “We are a society of laws – respect our laws, that’s all I ask”.

This is precisely what the human rights community would say to the Prime Minister, Minister of Immigration and the Department of Immigration – respect and follow your own laws, that is all we have ever asked. To this extent, the “Get papers or get out” policy is nothing more than a continuation of the tyrannical policies of former minister Fred Mitchell, whose speciality while in office was running interference for the Immigration Department while they continued to act illegally.

Concerning people who were born here, the policy is a complete contravention of their citizenship rights and their rights under the Criminal Procedure Code, the Immigration Act and the Constitution. What it says is: “If you don’t have a piece of paper which evidences that you have been granted citizenship or permanent residency, we will treat you as a ‘non-person’ and you will be denied all of your statutory and constitutional rights – we will be able to arrest you, detain you, never take you before the courts, and illegally expel you because we, the government, have not yet given you a paper to say you have a right to be here (even though the Constitution says we must) and worse still if you haven’t applied, we will simply get rid of you before you can apply.”

And yet while the government is deporting people who were born here, it is giving permits and visas to people who are not born here to come and work, get permanent residency and even citizenship and offering children from Dominica public education while denying or making it almost impossible for children born in The Bahamas of Haitian parentage to attend public school.

This is particularly perverse in relation to Bahamian-born people of Haitian parentage – the government is shipping those born in The Bahamas (including children) to Haiti against their will, while giving thousands of people born in Haiti permission to come and work in The Bahamas.

Clearly, the only real point of this otherwise futile exercise is to put on a very big, but ultimately false show of fighting illegal immigration for politically expedient purposes.

This is the more flattering interpretation. Another possibility is the policy amounts to a cover and distraction, the real aim being to systematically detain and expel from the country most or all members of a particular ethnic minority – a practice known to the international community as ethnic cleansing.

The truth is probably somewhere in between, but either way, what it amounts to is we have a government that is willing to pull the wool over the eyes of the public, engage in demagoguery, pander to a xenophobic lynch mob and foment hate and discrimination against a vulnerable group, all in the name of continued popularity.

While the policy itself may be utter nonsense, its long-term consequences for our society are deadly serious.

The fact the Immigration Department has been allowed and even encouraged to continue to act illegally by successive governments is a threat to the rule of law and the very fabric of our democracy.

Consider that human rights activists have not only asked the Immigration Department to operate within the law, but have also repeatedly called on various branches of the executive – the Prime Minister, Minister of Immigration, Attorney General – to show the legality of their immigration policy.

They have all consistently ignored such requests while issuing harsher and harsher policies. It is as if they consider themselves above the law.

Even the notorious Loftus Roker, once widely regarded as the harshest and most draconian immigration minister in our history (whose place in the annals of embarrassing Bahamian history has of course been overtaken by Fred Mitchell with PM Minnis and Symonette in a close dead heat) has declared the Department’s behaviour illegal, pointing out in a recent radio interview that every detained person should go before a court as soon as possible, rather than being deprived of their freedom indefinitely.

Yet the illegal behaviour is allowed to continue. How can the average citizen, the average migrant even, be asked to obey the law, when the authorities themselves refuse?

Meanwhile, Minnis and Symonette’s policy has sparked a series of hugely damaging public expressions of concern from dozens of top international observers.

For example, a joint statement calling for an end to the targeting of Bahamian-born children was signed by several groups, including Amnesty International; the Caribbean Institute for Human Rights; Robert F Kennedy Human Rights; and the Washington Office on Latin America (WOLA).

Amnesty International also issued an “Urgent Action” for one particular Bahamian-born individual, Jean Rony Jean-Charles, who disappeared while in the custody of the Immigration Department. And Dubravka Šimonovic, the UN’s special rapporteur on violence against women, warned the policy would lead to the “detention and quick deportation of hundreds of individuals, targeting the Haitian descent community disproportionately, some of whom may be born in The Bahamas.”

The Bahamas was also singled out in a major international declaration for its continuing practice of deporting people to Haiti without due process. It was signed by more than 20 international organizations and human rights activists, including the Washington Office on Latin America; the Americas Network on Nationality and Statelessness; the Centre for Justice and International Law; the Hope Border Institute and the National Lawyer’s Guild of the United States.

The “Get papers or get out” policy is not good news for The Bahamas on any level. It does not protect jobs, nor does it stop irregular migration; meanwhile, it is ruining our international reputation and making a mockery of the rule of law. We must tell our politicians to cease the political tricks and gimmickry, and deliver honest, effective, fair and legal policy proposals for tackling our immigration problems.

The easiest way to control employing illegal immigrants is to simply hit employers of this type with massive 10,000+ dollar fines and watch how fast Bahamians will get jobs because of all the vacancies. It is all about the Almighty Dollar and when employers see that it is cheaper to hire real Bahamians as opposed to getting fined $10,000 per illegal then things will start to move forward in our favour. We have to blame greedy employers for this economical mess we are in !

This government like all the rest obviously doesn't have any balls or common sense!