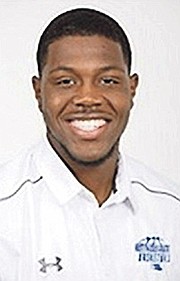 The Embry-Riddle Eagles junior forward was named to the All-Conference second team as well as the All-Newcomer team when the Sunshine State Conference office announced the 2017-18 men’s basketball postseason awards.

Mackey made school history when he became the first Eagles player to earn an All-Conference selection.

Mackey had an immediate impact on the programme as they transitioned to NCAA Division II with his record-breaking junior season.

He averaged 17.3 points and 12.5 rebounds per game, both team leads. In 28 starts, he also set a new single-season double-doubles record with 23 on the year and ended the season with 13 such consecutive games. He posted a total of 350 rebounds, another school record, ranked second in NCAA Division II.

He finished with nine 20-point games, including one 20-point, 20-rebound game in an upset of No. 10 Barry University. He also shot 88.8 per cent from the free throw line this season, ranked sixth among single-season totals in programme history.

Mackey ended the campaign strong with his final double-double of the season with 26 points and 14 rebounds. He transferred to the Eagles and NCAA Division II level after he posted stellar individual numbers and garnered postseason awards at the JuCo level.

During his stint with the Daytona State College Falcons, he was named the Mid-Florida Conference Player of the Year and was also named First team All-State in the conference as a sophomore.

Mackey played in over 850 minutes for the Falcons in his sophomore season, leading his team in time on the court. For the Falcons he averaged 15.1 points per game on the season, and 18.8 points in conference play. Mackey also averaged three times as many boards as his next teammate statistically, averaging 14.4 rebounds per game in conference contests.

He said the educational opportunities at Embry-Riddle were at the forefront of his decision process. “I always valued my education. Being an engineering major, Embry-Riddle is one of the best programmes nationwide. The university and campus is growing rapidly.

“Also Embry-Riddle is a winning programme under the leadership of Steve Ridder, who is father of the head coach at Daytona State.

“I also developed a great relationship with the entire coaching staff through this recruiting process and I believe they had my best interest at heart,” he said.