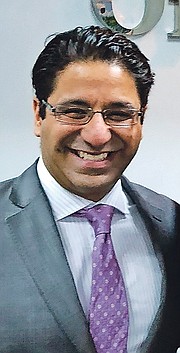 OBAN Energies President Satpal Dhunna has said Peter Krieger, the company’s non-executive chairman, signed a heads of agreement with the Bahamas government during a “ceremonial” event at the Office of the Prime Minister three weeks ago because he, Dhunna, could not make it.

In a March 7 letter addressed to the Office of the Prime Minister, Mr Dhunna said he signed “the original counterparts” of the heads of agreement “for and on behalf of Oban Energies” in Nassau prior to his return to London.

“Oban Energies. . . hereby considers itself bound by the heads of agreement and is fully committed to progressing the project in accordance therewith.”

Last week it was revealed Mr Krieger did not sign his own name on the heads of agreement for the deal that was inked on February 19, but appeared to sign Mr Dhunna’s name instead.

Officials did not reveal during the press conference at the Office of the Prime Minister that Mr Krieger would be doing this.

The heads of agreement tabled in Parliament by Prime Minister Dr Hubert Minnis on March 1 bore Mr Dhunna’s name. It was dated February 19.

It is one of a string of controversies associated with the $5.5bn project in recent weeks and led to calls for greater transparency from the Minnis administration.

Philip Davis, former deputy prime minister, said last week that “ceremonial” signings like this one are “unusual”. He called for the government to release the document signed by Mr Krieger.

“Even in cases where it happens, you’d indicate that it is ceremonial so parties can be aware,” the Progressive Liberal Party leader said. “If because of convenience the document is required to be signed in this way before you make it public, you should say it and not let the public believe something that wasn’t the case.”

Mr Krieger’s participation at the event marking the heads of agreement’s signing last month reportedly caught some members of the Minnis administration by surprise, The Tribune was told.

His visibility was owed to a family connection he has to at least one of the project’s beneficial owners, two sources in the Minnis administration have said. He has since been permanently removed from his public role in the project, sources said.

It has been previously reported Mr Krieger has faced a Securities Exchange Commission (SEC) lawsuit alleging misappropriation of millions in investor funds.

Mr Krieger also pleaded guilty to first-degree felony of organised fraud in 2006. He has been barred in the US from acting as a broker or investment adviser or otherwise associating with firms that sell securities or provide investment advice to the public.

The government has also been attacked for a clause in the Oban heads of agreement which prohibits its termination whatever environmental impact assessments conclude.

However, the agreement empowers the minister responsible for the environment to force the discontinuation of any “operation or equipment” from the project that causes an environmental infraction.

In a paid advertisement published in local dailies last week, Mr Dhunna advised people not to pay attention to the “noise in the market” but to be aware of the positive things that the project will bring to Grand Bahama.

If he couldn't make it on FEB 19th - who signed the Heads of the Agreement tabled in the HOA by the FNM? ON MARCH 2ND ? IF HE DIDNT SIGN UNTIL MARCH 7TH?

Not the one fraudulently signed by Kreiger on TV.

OMG this is becoming a shit show. Tribune where are your investigative journalists??

In a March 7 LETTER addressed to the Office of the Prime Minister, Mr Dhunna said he signed “the original counterparts” of the heads of agreement “for and on behalf of Oban Energies” in Nassau prior to his return to London.

STOP BEING STUPID FOR JUST ONE MINUTE AND YOU WILL SEE WHAT WE HAVE BEEN SAYING TO YOU ALL ALONG. . ."IT HAPPENS ALL THE TIME"! THE MAN TOLD YOU RIGHT ABOVE IN THIS PIECE THAT HE SIGNED THE THING PRIOR TO THE "CEREMONIAL" SIGNING DATE!

Grovel somewhere else please....your obvious despicableness is too nauseating to say the very least.

thank you responding to the idiot as i had no intent or energy to.

he/she's the kind of person that would let dr. minnis and the fnm deficate on their chest and accept it.

Again, for those with a brain, not just a pulse:

If he couldn't make it on FEB 19th - who signed the Heads of the Agreement tabled in the HOA by the FNM? ON MARCH 2ND ? IF HE DIDNT SIGN UNTIL MARCH 7TH?

Not the one fraudulently signed by Kreiger on TV.

OMG this is becoming a shit show. Tribune where are your investigative journalists?

Meantime Minnis remains conveniently mumm.....not even a peep from behind his press secretary. The dimwitted Doc, not surprisingly, is just too overwhelmed to even acknowledge the serious gravity of his most serious mistakes. He lusted for the highest political office in our country, but now realizes he can't cope. How truly pathetic!

Kreiger is in charge. Satpal "roach on yuh bread" Dhuna is his frontman..

Kreiger probably orchestrated Dhuna "not being able to make it" to the signing, because ,as the man financing the operation, he could not stand not to be in thephotos. I now believe they knew exactly what he was and told him to stay away, but he pulled a fast one on them. As I said before, never go into business with someone you can't trust.

^^^ these comments are funny. all busy arguing about a signature, a date, a piece or paper. Why not waste the energy on engaging in spirited discourse on the implications of an oil refinery in the Bahamas?

Listen, the forging of a signature in front of an entire nation tells you everything you need to know about this man and what he thinks about the Bahamas and Bahamians. Columbus 2.0. In addition, he came back, just in case we didn't get it the first time, and told us we a bunch of noisemakers and he don't care what we think. He's going to construct his oil refinery in the middle of three nature preserves. And don't doubt fir a minute that he and Minnis weren't aware of the significance of that location, that's why Minnis took over the BEST commission and why the strange UNPRECEDENTED clause about proceeding no matter what the EIA says is in the contract.

The signature tells everything.

Once I know a person has fraud tendencies, there's no need to discuss whether or not their business is good. It could only end in one way.

If this deal reflects the business acumen of the administration, then this country is done for! Start to pack yer bags!!

It escapes me what Bahamians really want. Do they want the drama of running amok castigating and obstructing every government they themselves put into power. Is it just the drama of it all, the posturing, the becoming a fifteen minute wonder in the newspapers, the spite of opposing parties????????? What the hell do Bahamians want????? Certainly not jobs..........that has somehow taken the back table, but I thought that was one of the main jobs they voted this government in for? I'm confused!!!!!!!!!

When I heard that the project was in the middle of three nature preserves, it made everything clear.

Bahamians want sensible, responsible, visionary, leadership with the ability to think beyond getting re-elected!
Bahamians don't want whats left of our birthright sold for a bowl of soup!

Bahamians want jobs, yes, but does it have to be at the expense of everything else? One oil related accident could affect tourism, fisheries and the environment for decades to come. Is that risk worth several hundred jobs?

Yeah......some of you can stand on your moral high ground because you able to pay your mortgage on time and live comfortably. You don't even know yet if this will negatively affect the environment, just guessing that it will.

I'm sure the BNT knows that it WILL negatively affect the three national parks it will sit in the middle of. I'll side with them.

This is not about moral high ground. This is about thinking strategically. When you don't have money you have to do things a different way, engage the people and see if out of 30,000 people you can get 50 ideas that with a small amount of funding could create 20-100 jobs each

The goal post keeps changing, first it's shut up we in charge, then it's its only been two months, then give him a chance, then it's this deal is wonderful, now it's y'all principles too high we need money any way we could get it.