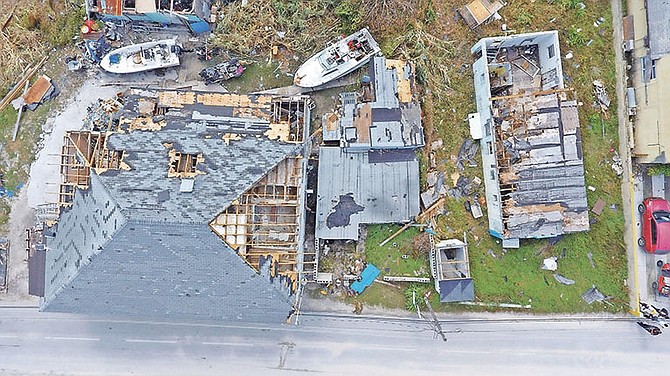 The Government is seeking a $100 million ‘contingent’ loan facility that will finance “extraordinary spending” in the wake of hurricanes and other natural disasters.

Its ‘emergency financing’ plans are revealed in a just-published Inter-American Development Bank (IDB) document, which details the proposal to provide the nine-figure credit line through its Contingent Credit Facility for Natural Disaster Emergencies (CCF).

The disclosures show the Minnis administration has wasted little time in seeking to avoid the Christie administration’s fate, after it was forced to make a $150 million emergency borrowing in October 2016 to deal with the worst effects of Hurricane Matthew.

That credit facility took time to put together, and blew the 2016-2017 Budget projections regardless of the pre-election spending splurge. The Government appears to have learnt some lessons from Matthew and the devastating impact of hurricanes Irma and Maria on other Caribbean nations last year, even though the Bahamas’ major population centres were largely spared.

“The objective... is to alleviate the impact that a severe or catastrophic natural disaster could have on the country’s finances by increasing the availability, stability and efficiency of contingent financing to deal with emergencies caused by events of this type,” the IDB paper said of the $100 million facility.

“The contingent loan will be designed to ensure a fast provision of liquid resources to finance extraordinary public expenditures during emergencies caused by severe or catastrophic natural disasters; and have an adequate amount of resources, within the limits established by the CCF, that can meet the foreseeable financing needs of the Bahamas when such disasters take place.”

The IDB paper says the $100 million facility will only be drawn down if the Bahamas is struck by a major hurricane, or some other natural disaster, that meets the “location, type and magnitude” terms previously agreed with the Government.

“The eligible events that can trigger potential disbursements will be outlined between the country and the bank in the Operating Regulations (OR) of the programme,” the IDB said. “The loan will initially provide coverage for hurricanes.

“However, during loan implementation, at the borrower’s formal request and once the bank has developed the corresponding parametric triggers for the respective hazard, other relevant hazards for the country could be included under the loan’s coverage.”

The IDB added that the $100 million credit facility will initially be available to the Bahamas for five years, and could be extended for the exact same duration depending on an agreement between the Government and the bank. The Minnis administration has made no secret of its desire to implement contingency funding mechanisms to reduce the Bahamas, and Public Treasury’s vulnerability to natural disasters, with the IDB revealing that hurricanes inflicted a collective $661.6 million in damages on this nation between 2015-2017.

“In the last three years, three major hurricanes have made passage through the country,” the IDB paper recalled. “Hurricane Joaquin (2015) which affected south-eastern islands having a relatively low population, causing damage and losses of US$105 million.

“Hurricane Matthew (2016) greatly impacted the country’s major population centres in New Providence and Grand Bahama, as well as the district of North Andros, causing damage and losses of $438.6 million, and Hurricane Irma (2017) affected the provision of basic services in Grand Bahama and caused significant damage in Ragged Island, Acklins, Inagua and Bimini, with an estimated total damage and losses of US$118 million.”

Highlighting the Bahamas’ vulnerability to hurricanes, the IDB said this was exacerbated by the location of key infrastructure, economic assets and communities in low-lying coastal areas, exposing them to flooding and storm surges.

It added that a “one in 100 years” hurricane would wipe out 8.5% of Bahamian gross domestic product (GDP), a sum equivalent to more than $850 million based on revised national statistics. “This number increases to almost 28 per cent of GDP when considering an event with recurrence of one in 500 years,” the IDB added.

“These trends are likely to worsen as a result of climate change. The Bahamas is highly vulnerable to sea level rise and storm surge associated with increasing intensity of extreme weather events.... A recent IDB study indicates that the probable flood exposed area in Nassau will expand 8 per cent by 2050 due to the increasing precipitation caused by climate change.”

Given the Bahamian economy’s reliance on tourism, fisheries and the natural environment, the IDB said the increased frequency and severity of hurricanes was “a serious concern for future environmental, economic, and social sustainability in the Bahamas”.

“In 2016, Hurricane Matthew caused losses equivalent to 6.75 per cent of GDP, with a resultant significant impact on tourism during 2016 and early 2017,” it added. “Even when private investment has been important to rebuild the Bahamian economy after a natural disaster occurs, there are still structural challenges.

“Historically, the Bahamas has relied on the accumulation of debt to absorb the cost of recovery, contributing to the rise of public debt. The central government debt-to-GDP ratio is estimated to have increased to 73 per cent in the fiscal year ending in June 2017. The fiscal deficit is estimated to have reached 5.7 per cent of GDP for fiscal year 2017, up from 3.5 per cent of GDP in 2016, due to post-hurricane cleanup and reconstruction spending, temporary tax reliefs, disruptions in revenue collection and sharp increases in the wage bill.

“The country’s vulnerability to natural disasters and its current macroeconomic environment highlight the importance of implementing measures that can help increase the Bahamas’ economic and fiscal resilience to disaster risk.”

The IDB said the Bahamas’ Risk Management Index (RMI), a measure of its institutional and community response to reducing climate change risk and vulnerability, was ranked at a low 29.76 out of a maximum 100 in 2011.

“There is an opportunity to create a long-term comprehensive financial strategy that combines a set of different instruments and mechanisms, such as reserve funds, contingent financing and insurance, in order to provide an efficient and effective coverage for the country when natural disasters of different severity levels occur based on their magnitude and probability of occurrence,” the IDB said.

“Also, the local insurance market needs to be further developed and improve penetration rates by making coverage more affordable to households and businesses.” It noted the International Monetary Fund’s (IMF) revelation that 60 per cent of Bahamian households are without insurance or are underinsured.

The proposed $100 million credit facility shows the Government is not relying solely on the $35 million worth of insurance coverage purchased from the Caribbean Catastrophic Risk Insurance Facility (CCRIF).

Here we go! A set of different instruments and mechanisms, reserve funds, contingent financing and insurance. They are sooo vague. Wonder what would really be used as collateral? Baha Mar? Furthermore, whatever the "strategy" it still equals increased debt.

“However, during loan implementation, at the borrower’s formal request and once the bank has developed the corresponding parametric triggers for the respective hazard, other relevant hazards for the country could be included under the loan’s coverage.” Just LOVE this clause.

This bunch professes intent to fix the country but is digging in the same hole as all the rest!

EXCELLENT data in above story encapusslates why the widespread use of MOTRGAGE INDEMNITY by mortgage lenders should be banned as illegal as it increases the risk of mass failures as it enables the banks to overeack in profitting creating riskier marginal loans. The indemnity premia is paod by mortgage loan applicant to allow the mortgage lending bankmto increase the applicantcustomer to borrow up to 95% (risk increased 20 % more)of the purchase price or appraised value whichever is lower provided the lender ensires borrowing applicant does not commit more than 45% of income and 55% to survivelive and with loan officers now forced yo be loansales person to meet huge targets to get a salary increase and or bonuses it is quite likely something fishy goes on -some banks even give customer credit card after customer is at 45% dsr.makingbterms illegal and fsilure likely...and many customers are unable to successfully complete mortgage. All these loans should show lack of due care and negligrnce...... Govt should not have to create mortgage relief as it cannot fit in the parameters the banks have set with their terms of lending........ Banks have now changed applications to now qualify to repay, obviously because ......they knew their application process..... something wrong was happening and all these customers were defaulting....even affected up to this day...Recent Tribune article on Scotia main bramch manager being let go and revealing sales targets not met etc confirms these hidden predatory practice.

Further to this is that hurricanes are an annual occurance and in the case pf Freeport hit first many businesses will layoff workers...leading to defaults...and with widespread defaults as in Freeport and hurricane devrstation as in many homeowners requiring govt hurricane releif ...it is unlikely thst devestated homes can be sold to recoup normal loan lending plus additional loan amount covered by insurance and required to be paid by the mortgage lending bank from the customers pocket to supposedly safeguard the bank by endangering the customer more with a riskier loan. Further risk is to monetary process, bad loans, provisions, liquidity etc that sidetracks govt policies and devuate causing additional challenges in economy.

At least it's not an actual loan until it is drawn down. It probably still incurs a monthly retainer fee though.

It is a good move by govt because delays after a disaster in getting financing means smaller problems can grow larger while we are waiting. The ability to respond quickly can lead to overall savings. Good move.

Very good Roc wid Doc at making preparations ahead of time at the best terms during the lull ....but at the same time the authorities should still be looking into a sinking fund paid by taxes levied on areas likely to be able to fund it and to bendfit the most Bahamians likely to be most impacted ......and likely to be the neediest after a hurricane impact.