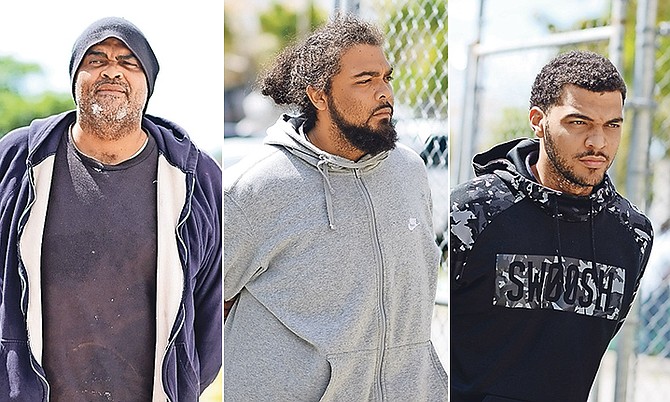 A 50-year-old man and his two sons were arraigned in a Magistrate’s Court yesterday over allegations they were found in possession of over $1m in criminal proceeds following a major police operation in Grand Bahama earlier this week.

Hank Weech and his sons, 26-year-old Brandon and 21-year-old Brad Weech, stood before Deputy Chief Magistrate Subusola Swain charged with two counts each of possession of the proceeds of criminal conduct and possession of dangerous drugs with intent to supply.

They were three of four individuals to be arraigned in connection with the seizure of over $1m in cash, over $45,000 worth of marijuana and $20,000 of hashish following a massive operation conducted by local and International law enforcement officials in the nation’s second city on Monday.

The fourth individual, 38-year-old Marvin Clarke, of Canaby Terrace, was arraigned on seven firearm and/or ammunition related charges stemming from the same operation.

Concerning the three Weechs, it is alleged that on March 19, at Freeport, Grand Bahama, and being concerned together, they were all found in possession of $1,351,162 cash in US currency, knowing or having reasonable grounds to suspect that the said $1m plus in whole or in part directly or indirectly represented their or another person’s proceeds of criminal conduct.

It is also alleged that on the same date, and being concerned together and with others, the Hampshire Drive, South Bahamia residents were found in possession of a quantity of marijuana with intent to supply those drugs to another.

According to reports, shortly after midnight on the alleged date in question, officers from both the Drug Enforcement Unit (DEU) and the Rapid Response Unit (RRU), while armed with a search warrant went to a residence on Hampshire Drive, South Bahama and discovered over $1m in US currency inside that residence. No arrests were made in that matter.

In a second incident, shortly after 3am on the same date, DEU and RRU officers, while armed with a search warrant, went to an apartment on Hampshire Drive, South Bahamia and discovered hidden in the ceiling, a duffle bag containing a large quantity of suspected marijuana and suspected hashish.

Each of the Weech family plead not guilty to the charges, and their matter was adjourned to June 20th for trial.

However, the attorney for the three noted that Hank Weech suffers from a myriad of health problems, such as diabetes and hypertension.

The deputy chief magistrate noted the attorney’s concerns, and informed her of the presence of qualified medical personnel at the Bahamas Department of Correctional Services (BDCS).

The three were subsequently remanded to that facility to await their trial. However, they have the right to apply to the Supreme Court for bail.

Concerning the unlicenced firearm charges, it is alleged he was found with a black Austria Glock 17 pistol; a black and tan XD Springfield .45 pistol; a silver Smith & Wesson revolver; and one extended 9mm magazine clip on March 20.

Concerning the ammunition charges, it is alleged he was found in possession of 13 live .45mm ammunition and five .45 hollow-point bullets on the same date.

He is also alleged to have been found in possession of 36 live, 9mm ammunition on the same date.

Clarke plead not guilty to all of the charges. His matter was adjourned to April 26 for trial. Bail was denied and he was remanded to the BDCS in the interim.

He has the right to apply to the Supreme Court for bail, however.