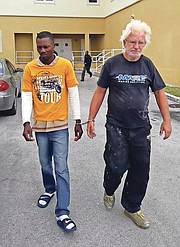 A New Zealand national was arraigned in the Freeport Magistrate’s Court on charges of illegal landing and overstaying.

It is alleged that on March 13, Genet was found at a local hotel in Freeport after the expiration of a one-month stay granted to him on January 19, 2018 by an immigration officer. His stay had expired on February 18.

He pleaded guilty to the charge and was ordered to pay a $2,500 fine or serve two months imprisonment.

Also appearing before magistrate Smith was Dunerve St Girat, 32, of Haiti, who was charged with illegal landing.

According to the particulars, the accused was found in Freeport having landed from a place from outside of The Bahamas without the leave of an immigration officer.

St Girat pleaded guilty and was ordered to pay a $300 fine or serve two months imprisonment. He paid the fine and was flown to New Providence, where he will be detained at the Detention Centre to await deportation to Haiti.

I can see if you've been refused entry to Bahamaland but you still decide to enter the country illegally, you should maybe face some kinds proceedings, still if they haven't committed no other crimes, why not just deport them.... just not into all this jailing people over simple immigration missteps - this saddling them hefty fines and criminal records.