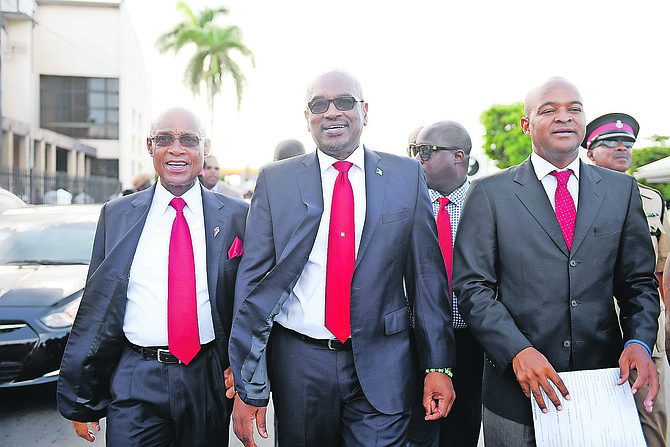 AFTER defying Prime Minister Dr Hubert Minnis’ ultimatum to either tender his resignation or be fired, Centreville MP Reece Chipman was sacked as chairman of the Antiquities Monuments and Museums Corporation on Saturday.

The firing – which comes a mere ten months into the Minnis administration’s term in office – is allegedly related to Mr Chipman’s handling of the AAMC, The Tribune was told.

However, he refused, stating in a letter sent to the prime minister and parliamentary colleagues ahead of his axing that he would only do so if Permanent Secretary Jack Thompson and several other high-ranking government employees at the AMMC also submitted resignations.

He further claimed the AMMC was operating outside of the law and also suggested the government was following the status quo of the previous Christie administration.

When contacted by this newspaper yesterday about the controversy, Mr Chipman said he had high expectations of the Office of the Prime Minister which were not met, but added he regretted that things had escalated to this point. He also said the civil service is filled with “political prostitutes” which will hinder forward movement unless this problem is weeded out.

When asked if there was any bad blood between he and the prime minister, Mr Chipman said: “I don’t know where he is with it. I just know from my perspective I just had higher expectation of not him in particular but of the Office of the Prime Minister and I think that’s where the line is for me, my expectations were not met. It’s a difference in expectation. I wish him all the best with his role and of course I wish my administration the best moving forward but there is a level of expectation one would expect when we look at public service and higher office and in that regard I think there is a lot of work to be done.”

When asked if he had regrets, Mr Chipman told The Tribune, “It’s always regrettable when any organisation or administration gets to the point where obviously whether there is a lack of communication or just a lack of attention is given to certain areas.

“I think that the letter (sent to the prime minister) spoke to campaigning against a system and when a system of governance is filled with what I term political prostitutes it’s going to be difficult for us to move forward unless we rid ourselves of that type of injection in the public service.

“I think it’s important for the constituents of Centreville to know my take on it. And it’s also important for you to in terms of the fairness of reporting to understand both sides. Because the prime minister will have to say his interpretation of what transpired, I don’t know whether he will or won’t and then I guess we’ll have an opportunity to clear the air at some point.

“But it is important for us to acknowledge that we have a tough job. I do understand that the prime minister has a tough job. I do understand our administration has a tough job however there are some little things that are important. Like respect, like adequate relevant communication, clarity with regard to the law and with regard to corporate governance principles. Otherwise what will trickle down is a bunch of foolishness and that is not something I am going to be good at tolerating,” Mr Chipman said.

In his letter to Dr Minnis dated March 23, Mr Chipman said his request for the resignations of Mr Thompson, Deputy Permanent Secretary Carol Johnson and Director of AMMC Dr Keith Tinker were based on several concerns, which he claimed were brought to the attention of AMMC’s board of directors.

“Thank you for the opportunity to serve,” he wrote. “I would have told you that I would get back to you on Saturday, March 24, 2018, regarding your request for my resignation from the position of chairman of the Antiquities Monuments and Museums Corporation.

He also wrote: “We campaigned for change Mr Prime Minister. We campaigned against a system that was not working for our children and the next generation of Bahamians. We did not campaign on much of the same. Centreville will continue to fight for change for our people and Centreville hopes you endeavour to do the same.

“You would have been presented by myself with the AMMC Act and regulation in order for us to be in compliance with the law. Obviously, these were ignored by the Office of the Prime Minister.”

The MP claimed the AMMC received a double subvention of $206,000 that was not returned to the Public Treasury as is required by law.

He further claimed a senior employee had also failed to conduct duties as required and requested by the board and the chairman, and also received additional remuneration outside of contractual arrangements of the AMMC.

In addition, Mr Chipman said no audited financials for the corporation for the last five years as requested by law had been provided.

The letter also stated there were unauthorised approvals written without Cabinet’s consent, which is also required in some instances.

He said the AMMC Act and regulations were further being ignored in the operations of the corporation.

There are many other MPs who share Chipman's general view of Minnis. Thanks to the dimwitted Doc the FNM ship will soon begin taking on more water than it can bail.

So let’s see if I’m getting this right? Dr. Minnis and the FNM wants a forensic audit of the various government departments and prosecutions for persons who have abused their office and more specifically government funds but this rule will or does not apply to the AMMC? And if and when anyone tries to enforce the law they will be fired? Not unlike under Donald Trump?

"The MP claimed the AMMC received a double subvention of $206,000 that was not returned to the Public Treasury as is required by law." .. if this statement is true. there is alot of fire behind this smoke and more people at the AMMC and the Min of finance should be fired.

Where is Banker and catisland boy .probably some place hanging their heads in shame. I really can not blame them.

On the face of it I will certainly side with Chipman. I know he knows about agreements, contracts, numbers and the like. I would be VERY surprised if he is not dead-on-center with any claims or allegations he is making.

doc and his FNM Party and the media lied to get them in power. Now the Devil who is the father of lies has left them to themselves. this is just the beginning there is more to come . stay tuned..

Ma Comrades, Please let us laugh at we selves make it through rungin' bell 2022. Sadly, for 91,409 citizens who rolled da dice to chance a vote for the 35 red shirts across our colony many island constituencies - Minnis's 2017 general election 'transparency promise,' we now knows it was never intended for Minnis to respond (be up front) to a most serious bordering on unlawful claim by one his own red MP board chairman's defying the PM's turning blind eye AMMC receiving and keeping an double subvention (double dipping) cash monies from low on bank notes vault of It's the people's time hard-earned $206,000 public purse? {You does knows this is not made up, right?} Any wonder 'Acee' tolerances gone quick on PM?
Hopefully, or so I feel that before rungin' bell 2022. the new be King Charles and Queen Camilla, will see wisdom restore our Out Islands, back under English umbrella family colonies?

Mr Chipman knows his maths and business ethics and whatever his assertioms are in respect to the AMMC certainly needs fullest priority and attention.

".... he would only do so if Permanent Secretary Jack Thompson and several other high-ranking government employees at the AMMC also submitted resignations."

For far to long the upper echelons of the Civil Service have been running amuck.

Mr. Chipman has shown us that he is a man of integrity.

Our burden pain I carry.
If only more my Comrade citizens would've known they were about be red shirts enslaved 5-years. my blogging efforts might have freed many more on 10th May 2017 - that fateful day the red shirts mentally enslaved 91,409 citizens vote their 35 candidates - the PLP's freeing of 59,253 citizens with the DNA 7,577, and Other candidates freeing another combined 2,168 of their citizens from 5-year term red enslavement. {No make making up stuff in head likes these statistics}.Never too late free, free at last, you will thank Minnis's god almighty we are free at last from da red shirts.

The "hope" was they would rise to the occasion since there were a few level headed reps among them. I'm not sure what's happened. Even the FNM supporters on this site have turned into forces that are completely unrecognizable...well I take that back, they're quite recognizable, The Bahamas has been victim of the cronyism, victimization, nepotism and psycophantism for the past 45 years

I thought about this office of the spouse thing for example, where Henfiekd says he sees not a thing wrong....The only parallel I could think of where the leader of a country created a political office just to house his wife, was strongman riddled African countries. Strongman Mugabe's downfall started with the same move. Now we gat Minnis firing the Chairman with a letter issued by "Cabinet" but he openly says Cabinet knows nothing about the firing.

It appears like Dr Minnis, I can't say "they" any longer, is on a campaign to backfit evidence to this Oban deal. What a shocker today to find out the proposed site includes sites of historical significance but the AMMC was not even involved before the deal was approved back in February???

If things don't change by 2022 we will be at Papa Doc levels of dictatorship.