Face To Face: Walking In Her Mother's Footsteps

Some people come to The Bahamas and get sand in their shoes and they never seem to shake it out; returning to these islands again and again to be kissed by the Bahamian sun. That’s exactly what happened to Lady Caroline Simmonds.

This past weekend she returned to visit her “family” – the children and the administrators of the Ranfurly Home for Children. Her mother started the institution and she laid the cornerstone for the building when she was eight-years-old. During her most recent visit, Lady Caroline brought her two daughters and three grandsons to visit the home and meet the children with the hope of inspiring her offspring to follow in her footsteps.

Lady Caroline was just four-years-old when she made her debut in New Providence. Her father Daniel Knox, the Earl of Ranfurly, once served as Governor of The Bahamas. The earldom of Ranfurly is the last earldom created in the Peerage of Ireland that is still extant. Dan Ranfurly, as he was called, became well-known for his exploits in the Second World War as a British army officer. He was sent to Nassau to serve as Governor in 1953.

Little as she was, Caroline was old enough to appreciate this country for its beautiful ocean and its warm climate. She was glad to be far removed from the harsh winters that sometimes haunt the English landscape.

The official opening of the Ranfurly home for children with some of its first occupants. Pictured is Lady Hermione holding a bouquet of flowers and Caroline holding the ribbon from the opening ceremony at age eight.

“I remember my time here very well; it was a wonderful age to be here in The Bahamas,” she said.

“I came from England where there were cold winters – no beautiful blue water and sand and sea. I learned to swim here.”

Lady Caroline spent her formative years growing up in Government House atop Mount Fitzwilliam with her father and mother, Lady Hermione (pronounced her-man-ee), the Countess of Ranfurly. Caroline attended Xavier’s College and recalls making “lots of friends” in the four years she spent here.

During Lord Ranfurly’s tenure, Nassau the city had been struck by a major fire.

“The whole of Nassau was thought to have burned down, and my mother and father went down into the town as everyone had come together to man the hoses to try to put the fire out and save Nassau,” said Lady Caroline.

“My mother was on Bay Street and all of these children came running out of the side streets running away from the fire. When the fire was put out and Nassau was saved, she asked someone where all these children had come from in the middle of the night running away from the fire. She found out that they were all living in cardboard boxes down on the side streets.”

She added: “There was no orphanage, no refuge for these children who had nothing and nowhere to go; so she started to raise the money to build the home, and that is how it all started.”

Last weekend she toured the Ranfurly home and met most of the 29 children who live there. Assistant Administrator Princess Burrows took Lady Caroline along with her family on the tour.

Her daughters Zara Osztreicher and Rose Tomalin were impressed with the neatness of the rooms of the boys' and girls' quarters and commended the children on their works of art – sketches and paintings that adorn the walls. They enjoyed the brightly-coloured recreation room, donated by CIBC bank, which has video games and board games for the kids, as well as inspirational messages on the walls and very comfortable furniture for lounging around. During the visit, Sherelle Rolle of Mount Tabor church was there on community service offering counselling to one of the girls.

Louis, Nikolai and even baby Arthur, her grandsons, were fond of the chickens in the coop, which were over a hundred in number. Fresh eggs are always on sale at the Ranfurly home. The vegetable patch is being revamped after Hurricane Matthew did much damage to the area. Rose and Zara pointed out that the garden would be extremely important in teaching the kids important life lessons by growing their own vegetables. 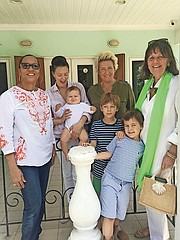 The family toured the washroom, kitchen and sporting areas before returning to the dining room to talk with the children. They were impressed by quite a few of the Ranfurly home’s inhabitants, including one of the eldest children who is about to graduate from high school with aspirations of becoming a chef.

“It’s been wonderful,” Lady Caroline said of the tour.

“All of the artwork, the flowers, the animals – everything! The children have a wonderful computer room as well. As you know, with 30 odd children, there is a lot of wear and tear on the building and it’s always in need of renovations. Right now, the current needs are a renovation of the girls’ bathroom and the need for a transitional home.”

Ms. Burrows pointed out that it would cost about $40,000 to create a proper bathroom to facilitate the girls. She showed Lady Caroline the portion of land allotted for the construction of a transitional home. The home would allow for children who have graduated from high school and hence out of the Ranfurly home to have a place to stay “if even for a year or two” before transitioning to living on their own.

Some of the students are able to attend the University of The Bahamas while others are enrolled at the Bahamas Technical and Vocational Institute (BTVI) courtesy of a scholarship agreement with the Presbyterian church.

The government provides just over $100,000 in subsidies for the home, but Ms. Burrows said it takes about $500,000 annually to run the facility properly.

A few years ago, Lady Caroline worked with Mrs. Morley, owner of Cole’s of Nassau, to host a fashion show that successfully raised funds towards the purchase of a much-needed bus for transporting the children to and from school and to their extra-curricular activities. She plans on working towards another fundraising event, but is also calling on corporate Bahamas and private citizens to help the home raise the money it needs for the girls’ bathroom and the transitional home.

Lady Caroline is following squarely in the footsteps of her mother, whom she called “a fantastic woman with boundless energy who put everyone ahead of herself” and “worked very hard all her life to help other people”.

Lady Hermione was described by The Telegraph newspaper as “the author of one of the most delightful memoirs of recent times, To War With Whitaker (1994)”.

“Exuberant, witty and vigorously outspoken, the book, based on her wartime diaries, told how as a bride of eight months she had broken every rule in the Army to be near her husband,” said The Telegraph.

While travelling throughout the Family Islands, Lady Hermione noticed there wasn’t enough reading material for children in the out islands – in fact, some of them had no books at all. She set out collecting used books from people in Nassau and circulated them through the islands utilising the mail boats. In this way, she helped to fill the libraries throughout the islands.

This programme proved so useful that when she returned to England, she continued to collect used books and deliver them to children who otherwise would go without because she believed that “education is key”. The programme turned into the successful charity Book Aid, with Prince Charles as the patron. Book Aid has sent more than 86 million books worldwide to under developed and developing countries.

Lady Caroline lives in the historic family home Pednor in Buckinghamshire, built in the year 1500. The beautiful homestead is about an hour out of London on the way to Oxford. During the winters, she and her husband return to The Bahamas two to three times. They honeymooned in Exuma, which is one of the family’s favourite places to visit. She said it “pleases her greatly” that her daughters and their families are now coming to The Bahamas on their own.

Lady Caroline wanted the children of the Ranfurly home to know that she considers them as family and will continue returning to the Bahamas to visit, encourage and help raise funds for them as long as she can. She brought her daughters and grandsons along with the hopes that “they would take it over when I can’t do it anymore”. For that, administrator Burrows said, the children are “ever grateful”.