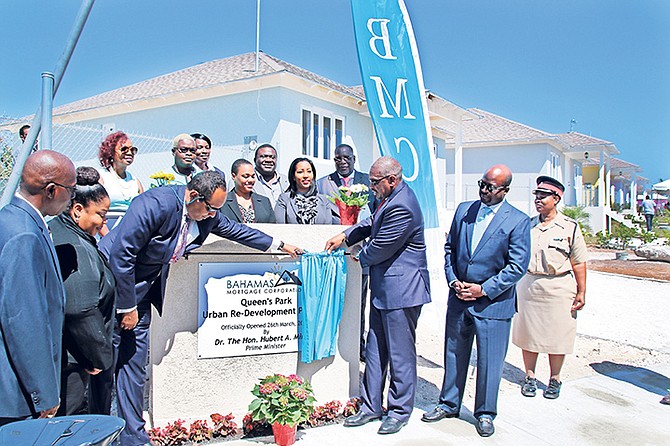 Five homes were built under the initiative headed by the Bahamas Mortgage Corporation.

The homes, which are being offered at a cost of $120,000 to new homeowners, feature an exterior construction of a wall panel system with acrylic stucco finish, an energy sufficient building process with insulated walls and ceilings, hurricane impact windows and wood cabinetry with granite counter tops.

The initiative began under the Christie administration but reached completion under the new government.

Environment and Housing Minister Romauld Ferreira told reporters yesterday the other aspect – low cost lots for first time homeowners at less than $30,000 – will be offered in May.

He said 20 lots would be up for sale in the Sunset Close extension just behind the Carmichael Road Post Office, at Carmichael Village – Carmichael Road West and in the Lionel Davis Development at Fox Hill.

The project unveiled yesterday, located Christopher Street just off Farrington Road, will serve as a model for future developments, particularly in the inner city of New Providence and in Freeport, Grand Bahama, officials said.

SUGGEST A BETTER TERM TO DEFINE THESE LOTS AND HOUSING PROGRAM RATHER THAN THE..... "LOW COST".....WHICH IS DEMEANING TO BAHAMIANS......NO LESS DIFFERENT THAN OTHER BAHAMIANS...WHY NOT SIMPLY CALL IT BY A PROJECT NAME.....?? .....these lots are artifically lowered in price and stamp duty costs etc from market value to meet the needs of Bahamians which is borne by taxpayers

I do think this is a good idea but not sure I agree with the artificially lowered in price bit and the tax being picked up by other tax payers. Also wonder who will monitor the up-keep of these residences so if there is a mortgage default Government will have an asset to recover.

I would sure like to find a way to get Bahamian taxpayers to subsidize the cost of my house!

By the time the land is acquiref of if Crown land usually parcels of the long ago plots of 10 acre farmlands leased for 22 years and defaulted or other parcels of Crownlands which have to have utilities electricity poles etc installed subdivided paved roads etc the lots are worth more than 30,000. Also depemding on cpmparable market value by the area last sold number of nearby lots, homes etc they are located in and other variables and is suitable for housing. The other 'low cost' lots are generally those inferior lots usually land that needs building up or has some factors not necessarily condusive to housing, or lots being sold as sometimes happens in subdivisions not approved without infastructure etc The authorities have known that since the 2000 that salaries were not at a level for the entry level employee was able to buy a lot and also build a house. It would take in most cases a couple husband and wife joint incomes and good savings to do this. Many persons would also buy land and 'peck' away buolding to belt course and with equity built up would then amalgamate land loan and amount to complete house as it is diffocult to 'peck' away at costly roof likely to be damaged by rain/elements. Another way and largely promoted was the lot and house package with many cases of up to 95% financing provided applicants met certsin criteria particularly meeting 45% total loan commitment to income and provided the banker did due care of ensuring that the remaoning 55% can meet living expenses or else the officer would be negligent in 'approving' the loan to meet quota for bonuses or salary increase and negligent in that the mortgage would be bound to fail as customers home expenses kick in. Usually this is secured with a Mortgage Indemnity insurance to cover the risk above bank policy normal lending. In many cases simple mathematical review can find faults in previous bank application qualifying processes which have now of course been changed /amended etc to again prevent mass 4000 plus mortgage defaults tying up some billion dollar bank funds in defaults. There are even stories of banks barely approving 45% mark and then giving customer credit card exceeding contract 45% ratio!!