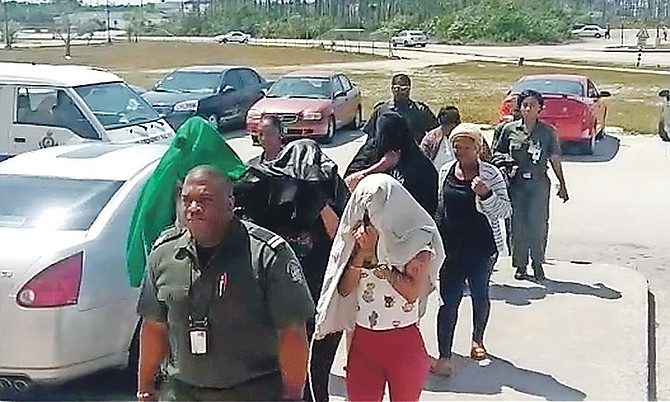 TEN foreigners were brought before the Freeport Magistrate's Court for various offences this week including engaging in gainful occupation, overstaying, harbouring illegal persons and illegal landing.

Among them were three Jamaican women who were employed as dancers and charged with illegally working in The Bahamas.

The particulars are that on Saturday, March 24, the women were found at a nightclub in Freeport employed as dancers without first being granted a work permit by the director of immigration in accordance with Section 30 of the Immigration Act.

The trio pleaded guilty and were ordered to pay $1,500 each or serve six months in prison. Magistrate Johnson also ordered their deportation on payment of the fine or completion of their custodial sentence.

It is alleged that on March 23, Philips was found at a home on Nansen Avenue after allegedly overstaying her time in the Bahamas by one year.

According to information presented in court, Philips was granted a 14-day visitor stay on February 5, 2017, by an immigration officer and her time had expired on February 19, 2017.

She pleaded guilty and was ordered to pay a $1,500 fine or serve six months in prison. Magistrate Johnson ordered Philips to be deported on payment of the fine or completion of her custodial sentence.

Meanwhile Willieson Noel, 32, a Haitian national born in The Bahamas, was charged in Court One before Deputy Chief Magistrate Debbye Ferguson with harbouring illegal persons, contrary to Section 47A and (1)(a) of the Immigration Act. It is alleged that on Friday, March 23, he harboured two persons, namely Schiler Francois, and Elene Henri, at his residence in Bartlett Hill, Eight Mile Rock to help them evade apprehension by immigration officials.

Noel pleaded guilty to the charge and was ordered to pay a $1,000 fine or serve one-year imprisonment.

Noel told the magistrate that he was only trying to help out his people. He paid the fine and was released.

The two Haitians nationals, Francois, 29, and Henri, 25, were charged with illegal landing.

It is alleged that on March 23, the accused were found in an apartment located in Bartlett Hill, having arrived in the Bahamas from another country without the permission of an immigration officer.

They pleaded guilty to the charge and were ordered to pay a maximum fine of $300 each or serve one-year imprisonment. Magistrate Ferguson also ordered them to be deported on payment of the fine or completion of custodial sentence.

The particulars are that on March 23, immigration officers discovered Joseph at an apartment on Nansen Avenue, Freeport. It is alleged Joseph arrived in the Bahamas illegally.

He pleaded guilty to the charge and was also ordered to pay a fine of $300 or serve one-year imprisonment.

Both pleaded guilty to the charge and were ordered to pay $300 each or serve one-year imprisonment. They were also ordered to be deported on payment of the fine or completion of their custodial sentence.