Face To Face: Straight Outta Compton - And Around The World 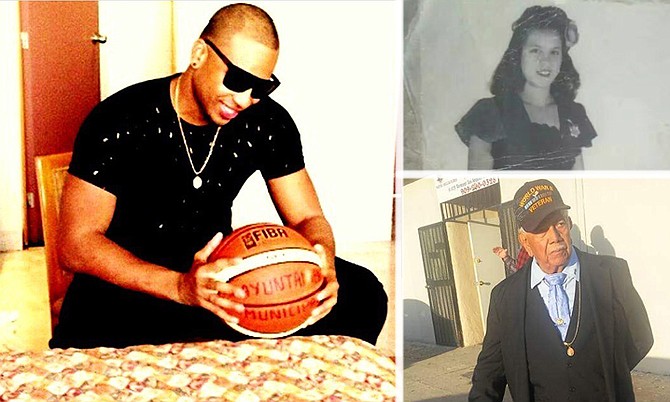 Mahershal Simonet; his grandmother, Anna Simonet, at a young age; and his grandfather, Ervin Simonet, now 94, whom Mahershal speaks to almost daily.

You could have been abandoned as a young child, left to fend for yourself in one of the toughest ghettos in America with crime statistics stacked against you, and you could still rise above them to become an international professional basketball player, making money playing a game you love. That’s the testimony of Mahershal Simonet, a passionate and driven man who is making a difference on and off the basketball court. He is a skilful point guard and shooting guard who has played in some 15 countries around the world; now he is in The Bahamas discovering his roots and sowing positive seeds into the lives of children here.

Growing up in Compton and South Central Los Angeles wasn’t easy. It is his mindset that led him to rise above his situation and make the best of his life. He knows if he can do it, then young men in New Providence with life stacked against them, and Family Island youth with little opportunities, can do it too.

He was just four years old when his mother abandoned him on the streets of the ghetto in Los Angeles. His father and paternal grandparents rescued him and took him under their care until he was 18.

When asked what life was like growing up in these parts of Los Angeles, he replied: “It’s very dangerous and very different. You have to be really strong-minded to overcome the stupidness, the drugs, the scammers, because they all come from a poverty environment. You wake up, have breakfast, and you go out there and make sure that you safe, make sure you’re dodging bullets. You have to make sure you wear the right colours. If you wear certain colours on certain streets, something may happen. It could be a case of mistaken identity. You could have been in a car wreck on the wrong side of town, and you are not supposed to be there, and something may happen. It could be something very stupid but you have to deal with it.”

His grandparents, Ervin and Anna Simonet, became the anchors that kept him from drifting down the wrong path. The Simonets were “givers” and “they raised at least five families” in their house over the course of his upbringing, giving him a chance to grow up with cousins and other extended family members.

It was difficult for him not having a mother, and the circumstances under which he came to his grandparents’ care, but he is thankful for having the gift of a grandmother who poured her love into him. They were great role models. Ervin Simonet, now 94, served with distinction for Los Angeles City Hall for decades and is a World War Two veteran. Mother Anna had her own design shop on the East Side of Los Angeles, where she created unique, sought-after lampshades. The Simonets were married for 60 years before Mother Anna passed away.

“Anna was my mother for years,” he said, “I have those grandmother teachings – appreciating the small things and making my own way in life and giving this gift on to the next person.”

Mahershal attended St Eugene Parish School and was exposed to a Catholic education, an investment his grandparents made in him, with tuition at $500 per month. He remembers attending mass every Wednesday, praying often, wearing uniforms, and having a “very structured programme” that he benefitted from tremendously. St Eugene has just one building, yet four basketball courts and is known for producing great athletes. During his tenure, the school won consecutive championship and Mahershal won consecutive MVP titles.

After St Eugene, he attended the number one high school in the state at the time, Westchester High, and then went on to graduate from Washington Preparatory High School. After graduating, coach Tim Swartzendruber offered him a scholarship to Heston College where he broke records and made a name for himself in his freshman year. Later on, he came under the wing of another coach – Patrick Nee, the son of legendary University of Nebraska coach Danny Nee – and graduated from Highland Community College with an Associate’s degree in Science. Pursuing further education, Mahershal travelled to Texas and enrolled in Jarvis Christian College. Here, he played his best under coach William Sparrow and helped the team to win the national championships for the first time ever in the history of a predominantly black school in the state of Texas. He graduated with a Bachelor’s Degree in Teaching so he could “teach anyone in the world the life lessons” he learned.

“I was very talented at a young age,” he said.

“I dominated and I worked hard. I wanted the best opportunities for myself and I wanted to make my grandparents proud.”

With professional basketball aspirations, Mahershal was working out at different National Basketball Association (NBA) camps like the Lakers, the Celtics and the Clippers, but there was a “lockout”. “I was trying to find my way. There was an NBA lockout and I had to wait. I was waiting for a year for all of this to happen. My friend Ralph Mata who is also an agent took me and a few other players to the Dominican Republic. He gave me an opportunity and I did well with it, and that’s how it all started.”

Mahershal, now 32, would play in some 15 countries and learn several languages such as French, Spanish, Chinese and Swahili, gaining international exposure and friends along the way.

“I took myself overseas,” he said.

“I was my own agent. I didn’t depend on anyone. I saved the money I made and invested it in myself and approached the owners of the teams. I played from small – a hundred dollars a game to a thousand to three grand a game.”

His pursuits would land him in cities all across the world with tons of experiences to share. He recalls on one occasion, he was in Thailand and on his way to get a visa. Officials saw his passport, and it had a tear in it, so they detained him. For four days, he had no food or wifi service. Only water, and his regular call line allowed him to alert loved ones to his dilemma. He was “doing push ups and praying every day”. He had cash on him, and cleverly paid a janitor $175 to get him a passport. Once free, he headed straight to the first basketball court he could find.

“All I wanted to see was a basketball court. I didn’t want to see anything else. I just had to play. I started to play and I didn’t miss a shot. There was a guy standing up in the corner of the court watching me and he came over and said he wanted to take me to a practice to meet some people. From that opportunity, I was offered $5,000 per month for three months. It was just a random basketball court… it’s only God.”

Mahershal still returned to the US to play, but “it got political” and one day he made a decision. He took a one-way trip to China “with hotel paid and a basketball in hand and didn’t think twice about it”. That turned out to be the best decision, as he worked in the league in China for three years, working with the likes of Gary Payton and Nate Robinson and made a name for himself. That three-year stint ended in January, when he came to The Bahamas.

“I had enough of the pollution and I wanted to see blue skies and I came straight to The Bahamas,” he said.

“I am not leaving until my next contract and in the meantime, I just want to bless the children.”

He has hosted several successful basketball clinics, starting in New Providence and he is now making the rounds in Eleuthera. He was impressed by the raw talent in the country but advises that athletes with professional goals should network more and make closer connections with Americans.

His first clinic was at Akhepran International School in Fox Hill through a partnership between himself, school President Dr Jacinta Higgs, Member of Parliament Shonel Ferguson and friend Ivoine Ingraham. He went on to host clinic at government schools including Anatol Rogers High School where one bright star, Corey Sands, received a scholarship to North Carolina Max Prep Academy. Another up and coming athlete, Aaron, an Atlantis worker, is about to receive a scholarship, and Mahershal recently sent five students to McPherson University in Kansas for a clinic.

In Eleuthera, Basketball Association Vice President Dena Johnson invited him to invest in the children there, and he hasn’t left since and has already hosted several clinics with local and US coaches participating. MPs Rickey Mackey (North Eleuthera) and Hank Johnson (South Eleuthera MP) have been “tremendously supportive” and Aliv has come on board as a sponsor for these events. Actually, the entire island has been supportive, including William “Doug” Douglass, Bob and Kathy Coleman, Pineapple Air, La Bougainvillea Resort, French Levy Resort, Shauna’s Restaurant, PS Waste Management, Potlatch Club and Ronnie’s Sports Bar and Grill.

Through ancestry.com, Mahershal discovered his ancestors hailed from The Bahamas and the “I” may have once been a “y” like it is here, spelled Symonette. He has lots to discover but is doing his research and also visited the Department of Archives.

It was while vacationing here in The Bahamas at the Atlantis Resort that he got news his mother died. He had seen his mother only once since he was four. His cousin Jeff Holland, a successful football player with the University of Auburn on his way to the NFL, took him to see his mother. She was in an alley washing clothes.

“I forgive you for leaving me on the streets at four. Let’s forget about the past. Let’s make this day awesome and let’s move on. She gave me a big hug. I stayed with her for three weeks, I filled her refrigerator up with food and then I headed back to Europe to play.”

“My story is not just about basketball. It’s about making sure that young kids understand that even if you think you have nothing, you can take the smallest thing, the smallest opportunity and make it something big. Make it gold. Stay strong and every minute, every hour, use that tool, that opportunity to make that door open for you. Show the world that you were meant to be here.”

His name, given to him by his mother, reminds him of his purpose. His full name, Maher-shalal-hashbaz is found in the Bible, Isiah 8:1 and is a source of his inspiration, as it means “to go and not to wait”.