Sun’S Jones Yet To Appear In Training Camp 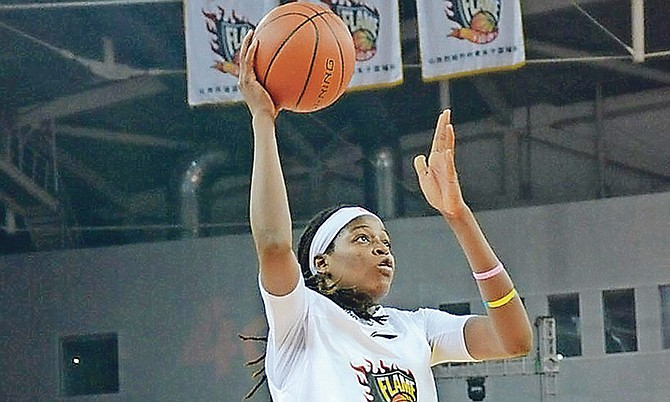 Jonquel Jones has yet to make an appearance in training camp or in any of the Connecticut Sun’s preseason games, but the front office is excited at the possibilities this WNBA season when the team is at full strength.

“She’s handling some stuff at home with family, working through some things that she needs to do in order to get here,” said head coach Curt Miller in reference to the Norwich Bulletin which reported Jones’ absence from camp.

“We expect her here any time and we’re very supportive of her as an organisation and can’t wait to get her back. Until then, my focus has to be on the people who are in camp.”

The Sun recorded wins over the Dallas Wings and Los Angeles Sparks as the preseason got underway this week.

Miller said the combination of Jones – the league’s reigning Most Improved Player and Second Team All-WNBA selection, and Chiney Ogwumike, the 2014 Rookie of the Year, could take the Sun to the next level. Alongside Ogwumike, Jones averaged 6.8 points and 3.7 rebounds per game as a rookie.

Last season, with Ogwumike sidelined with an injury, Jones developed into one of the league’s rising stars. She finished the year averaging 15.5 points and 11.9 rebounds per game, posted a record-setting total of 403 rebounds and also added 20 double doubles.

Expectations will be even higher for both Jones and her team headed into the 2018-19 season. “I’m still anxious for that,” Miller said. “Now, we’re waiting for JJ to arrive. We will just have to wait a little longer but I can’t wait to get going and practice with Chiney and JJ on the floor together and see how they’re going to mesh.“

The WNBA announced last week 20 games that will be live streamed on Twitter during the 2018 season as the social media app returns for its second consecutive season of live game coverage.

Three of the 20 games will feature Jones and the Sun. The Sun will be in the first game broadcasted live on Twitter when the regular season commences on Sunday, May 20. They will face the Las Vegas Aces at 1pm. Their other Twitter broadcasts will be against the Dallas Wings, 7pm August 14, followed by the finale against the Los Angeles Sparks, 3pm on August 19.

The Sun will close out the preseason on Friday, May 11, hosting the Atlanta Dream at 7pm in Webster Bank Arena in Bridgeport.

Jones comes off a successful offseason where she led her Shanxi Xing Rui Flame to a runners-up finish in the Women’s Chinese Basketball Association. Jones ended the regular season averaging a team-high 29.3 points, 18.8 rebounds and 2.9 assists over 31 games.